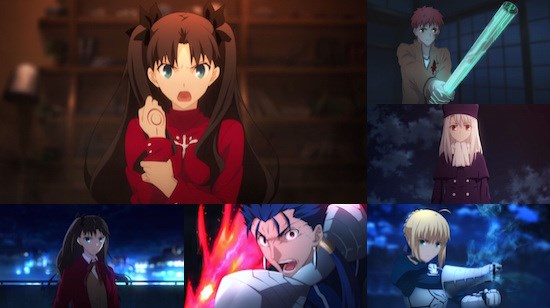 This isn’t the first time we’ve been able to enjoy the Type Moon visual novel Fate/Stay Night adapted in animated form here in the UK. First came the Studio Deen Fate/Stay Night adaptation, which hit the shelves here in late 2009, courtesy of MVM Entertainment. This was followed by the Fate/Stay Night: Unlimited Blade Works movie, also from Studio Deen, which arrived here on Blu-ray and DVD late last year thanks to Manga Entertainment. In fact, we’ve been so well served by adaptations of the Fate universe that you may be forgiven for wondering why this latest version is necessary at all. With these older Studio Deen adaptations, fans of the source material often gave the impression that justice had not quite been done to Type Moon’s beloved visual novel. This new adaptation of Fate/Stay Night: Unlimited Blade Works has been produced by Ufotable, who brought the highly regarded prequel Fate/Zero to our screens, which is available here on DVD and Blu-ray from MVM Entertainment.

This new adaptation of Fate/Stay Night begins with a prologue episode, which offers a little background information for those unfamiliar with the series. This is a double length episode and follows fan favourite Rin Tohsaka as she goes about summoning her servant (Archer) and her first encounters in the Fifth Holy Grail War. For the uninitiated the Holy Grail War is essentially a battle to the death between seven high level mages and their “servants”, the winner of which obtains the legendary Holy Grail and potentially the power to grant any wish. The servants themselves are warriors of legend from throughout history, although, they’re referred to almost exclusively by their class title (Sabre, Archer etc.) as their true identities are closely guarded secrets, at least for now. The prologue also introduces us to Lancer, though not his master, who enjoys a brief scuffle with Rin and Archer before inadvertently setting off a chain of events which looks likely fuel the rest of the series. Given the events that unfold there you can bet we’ll be seeing a lot more of Lancer, and his master too at some point.

Once the series proper gets going Rin is eased aside into a supporting role and Shirou Emiya takes centre stage. Things begin by following the events of the Prologue, but from Shirou’s perspective rather than Rin’s. Shirou Emiya then is our main protagonist, although he is arguably a less interesting character than Rin, at least in these early stages. Emiya, as everyone calls him, is quite literally a technical wizard, in that his mage powers allow him to see the structure of things. He uses this ability mainly to fix bits of technology around the school and at home. He’s also a complete novice in the ways of mages and a rather reluctant master, yet Emiya somehow manages to summon the strongest servant: Sabre, much to Rin’s chagrin. The opening episodes introduce a lot of seemingly incidental characters that may or may not play a bigger part later in series - there are one or two hints scattered around these episodes to that end. By way of example Sakura (a friend from school) and Miss Fujimura (a school teacher) often visit Emiya, and seem to be looking out for him, with the former even cooking meals for them all. There are hints of a lot more to these two than first appearances belie.

One of the first things you’ll notice when watching Fate/Stay Night is the high quality of the animation throughout. Although, you’ll have to wait a little while to see it really shine: the battle scenes are some of the slickest you will find in any made for TV anime. The combination of magic and traditional weaponry makes for some spectacular battles, there is a heavy use of computer animation for the action scenes, and it gives a slightly different feel to the battles than the rest of the series, though the transition between the two is so smooth as to be barely noticeable. The other thing you’ll probably notice in short order is the quality of the soundtrack, the music is very atmospheric and suits the series perfectly, as does the ending theme - from one of our favourite artists here at UK Anime Towers: Kalafina.

To summarise then: Fate/Stay Night: Unlimited Blade Works is a beautifully animated series with a wonderfully atmospheric soundtrack intriguing premise and hints at strong characterisation. It’s all very impressive thus far, so this is definitely a series to keep an eye on.

9
Beautifully animated with an atmospheric soundtrack and intriguing premise. One to watch!
LATEST REVIEWS