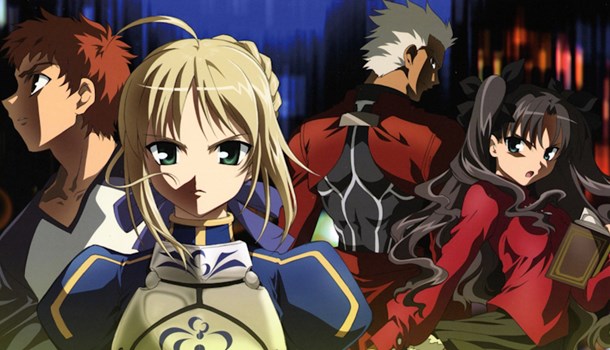 As the Holy Grail war continues, new players make themselves known - with enemies at all sides, can Shirou survive? In fact, never mind the war, he's not even winning the battle with his teacher over all the girls that are suddenly staying at his house..!

That's right folks, Fate has gone all Harem anime on us, and although it's not entirely detrimental, it does kill the pace. The first episode on this disc in particular just stops the action dead in its tracks as Shirou struggles to suppress his chivalrous nature when it comes to keeping his magical servant Saber hidden.

There are some strong themes running through this second volume, most notably Shirou's idealistic & pacifist beliefs, which are roundly mocked by Rin's servant Archer as totally unrealistic. He's right of course, but the pair's intense dislike of each other won't allow either to softern their opinions.

One of the major problems I had with this disc is that Rin's relationship with Archer is just far more interesting than the dynamic between Shirou and Saber, subsequently Rin just draws attention away from the lead whenever she's on screen, and I can't help wishing there was more of her and less of Shirou.

Of those making their first appearance, Rider really steals the show, giving Shirou a seriously stern kicking. Her character design is striking, and she's one of my favourite characters, despite her lack of dialogue.

The show continues to look as lovely as ever, with Type Moon's glorious character designs rendered with a soft pastel palette throughout. There's no doubt that the screenshots alone will shift volumes from shelves.

However, despite looking lovely, the story loses it's footing here, and just about recovers by the end of the disc - it needed to maintain the pace, but it looks as though all the fighting will be crammed into the final volume - despite a ncie rumble with Rider, volume 2 remains rather dialogue-driven fare, and without much in the way of revalations, maintaining interest becomes a struggle.

7
The story has dipped a bit in the middle, but remains engaging for the duration.