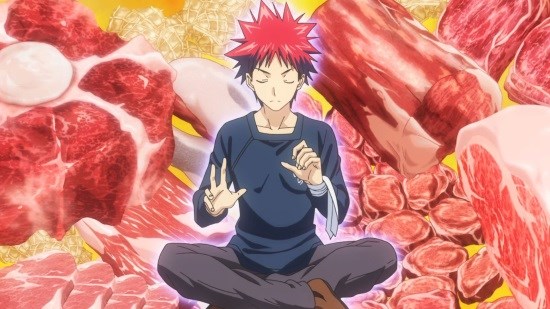 Boy how time flies. It’s been two years since I reviewed the first few episodes of Food Wars: The Second Plate when it was streaming on Crunchyroll and now it’s here to buy on physical media. If you’ll recall, my summary of the first 3 episodes was - ‘They've forgotten some of the ingredients and overcooked it’. Now that we can look at these three episodes again alongside the rest of the series let’s see if this second season of Food Wars can serve up a suitable entrée.

Following on from his success at the Autumn Selections, Yukihira is now set to compete in a gruelling head-to-head, single elimination show down against the other 7 chefs who made it through. On the plus side though at least this is seemingly the only event taking place at the school which won’t result in his immediate expulsion if he fails – unless he gets dragged into another Shoukugeki anyway. That’s more than can be said about what awaits him after the contest is over when the students are shipped out for some rigorous work experience that will test them to their limits!

If you compare the Second Plate’s ratio of episodes to manga material against the original series then things don’t look too different. The original series used 24 episodes to adapt 10 volumes of the manga whilst this one uses 13 episodes do to 6. In practise, however, the extra time that the original series had was hugely useful in making sure that things played out at a good pace. Here, my original opinion of the Second Plate still stands – the show feels rushed. Particularly across the first half of the series everything flies past at breakneck speed and notably misses out several key chapters from the manga several of which were made as stand-alone OVA’s which Manga have sadly not chosen to license for inclusion (admittedly getting hold of the episodes which were only released with certain volumes of the manga in Japan is always problematic for Western distributors but we still all wish someone would figure out how to get it done). These OVA episodes would have made excellent extras and filled in some of the gaps within this second series.

This season also suffers from the one issue that affects both the manga and the third season that recently ended its streaming run – Soma’s rivals, Akira and Ryo just aren’t as interesting as the creators seem to think they are which means the rest of the cast occasionally feel a bit disappointingly side-lined in favour of Moody-Man and Sir Smells-A-Lot. [Ed – Clearly someone must like them?]

Still, these are the only issues elsewhere its business as usual as Yukihira cooks his way into and out of all the trouble he’s ends up in. There’s genuinely fun drama and comedy in here as the various chefs serve up their dishes to the judges and wait for the hugely over-the-top reactions that are sure to follow. It’s in these episodes that we see the beginning of Food War’s biggest meme as members of the headmaster’s family disrobe themselves literally to show off their appreciation of a good dish, something which never fails to get a laugh!

The visuals are still on form and the food looks as decadently amazing as ever whilst the cast turn in a uniformly great performance with the lesser ‘bad guys’ coming across as fun and just nuanced enough to stand out from similar roles in other shows.

If you loved Food Wars then you’ll certainly be up for more now and whilst I do have some issues with it as discussed previously (along with the continued and still moronic choice to translate Shokugeki to Food War in the subtitles – did no-one translating the show read this dialogue out to see how dumb that sounds?), it’s certainly not enough to spoil the show and the second, shorter arc easily helps make up for some of the earlier shortcomings.

Rattle those pots and pans people because things are about to heat up in this kitchen!