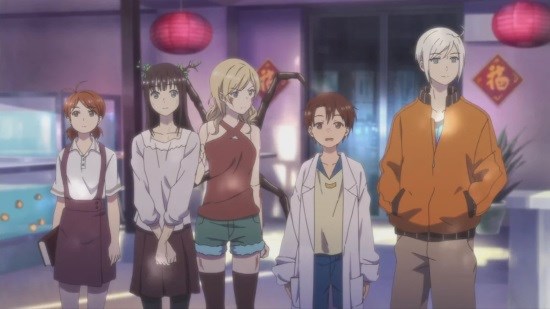 Family eh? can’t live with ‘em, can’t graft spider legs onto ‘em, what are you supposed to do? Some families are weirder than others of course and the one featured in the latest addition to Crunchyroll is stranger than most in this Chinese-Japanese co-production.

Tanisu has it rough. Caring for his family from a young age is hard enough but caring for them when they’re the result of a bunch of genetic experiments thanks to your mad scientist parents who’ve just been locked up….well, some might say that that’s slightly worse. It’s not helped by the fact that his siblings are a bit...quirky. Aisuri has a set of spider legs growing from her back and has a habit of chasing insects around and then...ew. Ashisu just wants to sit in the sun which makes plants grow from her skin. Suishi is telepathic and sarcastic – a lethal combo and Sunou has a habit of turning into a dog…Just you’re normal everyday family then.

Conceptually, Frankenstein Family is pretty out there. It’s certainly easy to draw parallels to say, a certain Full Metal Alchemist episode for example. They could have gone so many interesting and unique directions with this series which just makes it that much more of a shame that they…didn’t. Hold onto your hats folks because here comes another slice of life show! That’s right, no over plot to speak of, no over-the-top comedy, no big horror elements. Nada. Our cast spend the entirety of the first episode sorting out what they’re going to eat. Episode 2? Tanisu gets lost because he has a poor sense of direction. There is just no real substance here at all and it’s such a waste. It’s like if the creators of Game of Thrones had taken the colossal setting and story and then spent every episode watching the Starks eat breakfast. Worse, the slice-of-life stuff the show does want to do isn’t anything special either with the family's extra abilities being used for the odd gag but nothing that’s really memorable or stands out. In fact by the end of episode one you might struggle to remember exactly what happened.

The same blandness applies to just about ever other aspect of the production too. Wei Tainxing’s direction is pretty lifeless, the character designs are neat until you see them moving around in the most workmanlike of fashions and the backgrounds and music are totally unmemorable.

It’s so frustrating because everywhere you look you can see the potential for this to have been something truly great whether it went for horror, action, comedy or something else but no. This is an adaptation of a Taiwanese manga so you can’t lay the entirety of the blame at the feet of the anime staff if they were just following along with what they were given but then why bother in the first place? Why not spend the money on a project that’s either going to be great or that you can put some actual passion into? Bottom line is, there’s very little reason to watch this series unless you’re a fan of the manga. But even then I suspect you’d be a bit disappointed in this.

4
Turns out family can be boring even with genetic experiments.