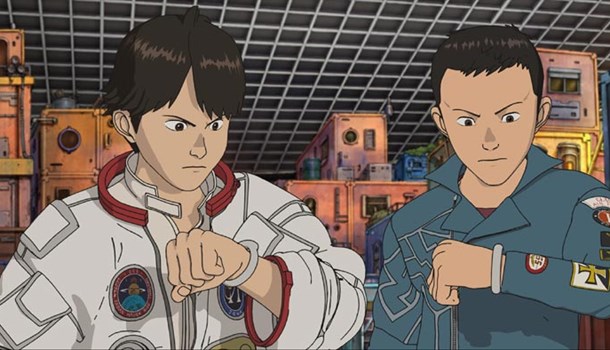 Frankly, Freedom is a slightly terrifying thing to review. One look at the star-studded names that make up the staff on this show - including Katsuhiro Otomo, Shuhei Morita and Dai Sato - and you begin to feel a shiver down your spine. Can the show really live up to the grand names on its staff?

Takeru is a teenage punk. A teenage punk living on the moon who loves street racing and wants nothing more than to beat his rival Taira in a motorbike street race. Unfortunately, being somewhat headstrong Takeru gets into a spot of trouble and ends up doing the lunar version of community service, working on the surface outside the EDEN colony doing rather thankless tasks. It is outside the confines of the comfortable isolated lunar colony that Takeru finds the remains of a crashed rocket, and within those remains is a photograph of the girl of his dreams with a small note scrawled on the back that the shunned and supposedly ravaged Earth is healthy. From there, Takeru throws himself into finding the girl in the photograph, besotted with her image.

The plot of Freedom is perfectly formed - barring one or two minor hiccups it maintains great pacing throughout and nicely fills out its total three hour run-time without outstaying its welcome. Freedom eschews any kind of side-plots in order to strengthen the main thrust of the show and prevent it from getting bogged down with minor or time-consuming details; a daring move that works perfectly in this case. The show effortlessly manages its pacing and tension, keeping you hooked for the entire show with a masterfully executed mixture of exposition and action that always feels just right from moment to moment. One of the greatest praises I can lavish on Freedom is that it invites you on its journey as a co-pilot instead of lashing you to the back of the car - you feel transported by the flow of the narrative rather than haplessly dragged along behind. It’s almost magical - an awful lot happens over the course of the show but its only when you look back that you realise how much has happened as everything was so effortless when it was occurring.

A lot of this magic stems from the characters - all of them are uncomplicated folk, which has the upside of making them individuals you can instantly relate to and doesn't bog the plot down with any forced drama or needless character reveals. Character development in the show is a quiet, understated thing that lets you discover on your own through spending time with the cast and greatly humanises them. A lot of the great character moments in Freedom are the small ones - a knowing smile or nod to cement friendship, silly conversations, and even bro-fists really help to flesh out the cast and make them deeply enjoyable to watch on screen. I often found myself laughing along with the characters and empathising with them utterly, especially in the latter half of the show.

The remainder of the show’s magic comes from it’s world-building, where it is clear that the creators invested a great deal of love and even a little nostalgia and wistfulness. Here, Freedom is as effortless as it is with it’s plotting, presenting a rich wealth of visual information for you to absorb without stuffing it directly into your face. The enclosed lunar world of EDEN, in particular, is very carefully presented to develop and maintain your suspension of disbelief so it can get on with the more important business of telling you a story. The background art in particular looks stunning and the wealth of small details help to flesh locations out and make them feel like living, breathing places. Katsuhiro Otomo’s hand in the mechanical and character design in Freedom really shines through and gives it a distinctive edge; a little extra something that makes you sit up and pay attention. The combination of very sober looking spacecraft based on the US Apollo program (including a starring role for the good old Saturn V rocket) and tricked-out lunar bikes, among everything else, makes all of the design work in Freedom worth paying attention to.

The audio-visual presentation of Freedom is arresting, and initially not in a particularly good way. The show uses a cel-shaded look for the characters, much like you might see in video games - for example in Dragon Quest 8.  For the first two episodes of the show the character's actions come across as looking somewhat stilted, and the character models clash with the backgrounds, not quite fitting in. Thankfully, as the show progresses this style matures, with the disparate elements of the art meshing together more naturally. There are even some stand-out moments where this improvement is highlighted, including one set in the driving rain and mud where the choice in character art style pays off in spades, delivering a tense and engrossing scene. The background music present in Freedom does its job as a fitting accompaniment to the events on screen, rising to meet the occasion during some of the more tense moments. Of particular note is the opening credits sequence, a very nice combination of a great Hikaru Utada track, animation and live action footage which got me excited for the episode to come every time without fail.

There is one sad exception to all of my praise, although thankfully it is isolated to one single event. The only problem is that this event is the very ending of the show. I’m obviously not going to post spoilers, but suffice to say that in the last five minutes of the show Freedom utterly faceplants. Just when you think everything is nicely sewn up and you are waiting for the epilogue, the show takes a harsh right turn and ham-fists an unwanted parting message into its ending, breaking the show’s carefully built tension. This sequence, in stark relief to the majority of the show, feels poorly thought out and disjointed, leaving the show to end on a rather down note but thankfully not sufficiently so to drag down the preceding events.

It is worth clearly noting here that this review is for the DVD version of Freedom, as these were the discs we were sent by Manga Entertainment. The entire three-hour (approximate) runtime of Freedom is fitted onto one disc, with the extras taking up a second. While the show still looks great on DVD, there are some moments where the limitations of the format poke through - there are a few very noticeable instances of colour banding present, as well as a nagging lack of resolution in some of the more lush and detailed scenes which were clearly pushing the DVD format to its limits. Unfortunately I do not have a copy of the Blu-Ray version to compare and so cannot say for sure if this provides the improvement one would expect and hope for.

One last point to raise is that Freedom contains frequent product placement for its sponsor, Nissin Cup Noodle. “Product placement? Heaven forfend!” I hear you cry. Well, don’t worry - the placement of Cup Noodle in the show doesn't detract at all from the pace of the show, and in fact is a great source of unintentional comedy due to how brazenly the product is inserted at times. The most amusing example comes early on, when an alarm goes off and the camera does a tight close-up of the Cup Noodle - oh wait, no, it was trying to show a beeping wrist strap the character was wearing that just so happened to be behind the product. It’s so brazen and silly you can’t help but laugh.

Even with its few shortcomings, Freedom is a great show to pick up and enjoy, especially now that it is available in a more price-conscious format - doubly so considering its previous Blu-Ray only edition put out by Bandai Visual that came attached with an eye-watering pricetag. The show knows exactly what it wants to do and, while it does drop the ball right at the very end, it executes on it nigh-perfectly with a flair and a flourish that is great fun to watch. While it may not change your world, it certainly makes its mark by being a little awe-inspiring, a little grandiose, and capable of sparking the mind and spirit with its quiet brilliance.

Disc 2 contains all of the releases extras. Extras include documentaries (Talking About Freedom, Freedom in the USA, Fly Me to the Moon), an additional vehicle race scene, messages from the cast, series digests, introductory trailer and next episode previews, and miscellaneous items such as a Cup Noodle TV advert compilation.

9
A wonderful, well formed tale of love, friendship, discovery and truth, Cup Noodles, and how wearing a space-suit jacket makes you look like a massive dork.
LATEST REVIEWS