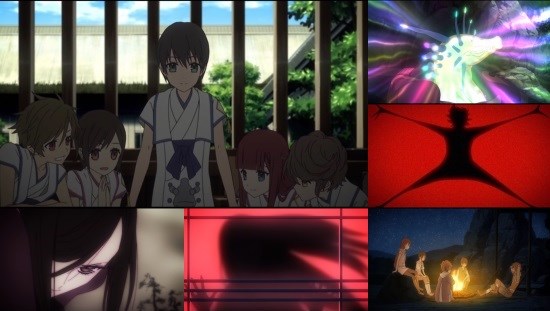 From the New World - Part 1

In a rural community exists a gathering of humanity blessed with psychic powers. For Saki and her group of friends, each day revolves around attending school to learn better control of their powers - however, group start to notice a few oddities concerning their day to day lives pertaining to the disappearance of children who are seen as being problematic in either the control of their powers or attitude towards rules and other students. After stumbling upon an odd creature in the forest as part of a school trip, the students become involved in an even greater mystery that will not only have them questioning the village's rules and customs but also the origins of their psychic powers and humanity's dark history.

From the New World begins by establishing the characters of Saki and her group of friends through the various conversations they have while using their powers to complete their school work. During this time the viewer is given explanations on how life is lived within the village, but also demonstrations on how their psychic powers are used. The most important aspect of these powers is the control required over it - not just by the individual user, but also by those in charge. The series quickly establishes these methods of control, with priests able to seal/unseal psychic powers through forms of hypnosis, and as things progress it becomes clear that control of these powers is not the only thing on the minds of the village elders.

School work and daily life revolve around keeping people docile and complacent about staying safe in the village and following its rules, and the series expertly shows the constant dangers that come from breaking these rules and acting out of turn by generating a foreboding atmosphere that lingers throughout. Within the village, students are rather subtly warned of the dangers of misusing their power and breaking the rules of the village through various teachings of legends and stories, giving the whole affair a rather religious aura to it wherein it controls its populace through suggestion rather than intimidation. As things progress and the history of the world is learned by both the viewer and the show's main cast, the various acts that have been performed in order for humans with psychic powers to survive become clear.

This leads the way into a rather interesting discussion about the aspects of human nature and ways to suppress certain emotions and actions. While some of the episodes that discuss this aspect become a bit of an information dump filled with a tonne of exposition, it manages to be extremely fascinating given the subject matter of the discussion and how well it ties into not only the story but aspects of the characters in the show. As well as discussing this, the series also presents past events of human history that led up to the point in time in which the show takes place. While the discussion is interesting, the stories and scenes shown are rather violent and gruesome which really drives home the main point of the discussion, in order to present some of the character choices as the lesser of two evils.

Together with this drama, there are also a few action scenes revolving around the characters using their psychic abilities. These mainly pertain to a story arc that occurs midway through this first collection, as the group find themselves lost in the forest and involved in a territory war between various clans of wildlife outside the village. Within this segment are some rather interesting uses for the Telekinesis and Pyrokinesis sported by some of the characters, mainly as the group defends itself but also to assist with launching a counter-attack against the tribes that live in the wild. While the series mostly exhibits a slower pace to let the mysterious aspect of the story sink in, these episodes feel rather quick and frantic, fitting the tone of these moments since the characters are involved in a life-or-death fight for survival and don't really have time to stop and contemplate their situation or observe their surroundings in the same way as they did previously.

Following this arc, the series jumps ahead slightly and presents the characters as adolescents now going through the various motions that are associated with puberty. This also ties into and references discussions that took place earlier in the show about human nature and the steps taken to control the village. While these issues were rather subtle at the beginning, here they are more overt and directly affect the character's relationships. Alongside this, the mystery aspect and people disappearing again makes a return - the characters may be older and wiser now, but with that comes more realisation of the dangers they can face as a result of their curiosity. The mystery here is also accompanied by some rather real danger and threat, leading the way into some rather intriguing conflicts and discussions.

From the New World's first volume does a lot to introduce it's characters and world. It sets up a mystery around psychic powers and a society created from the collapse of civilisation with several interesting discussions about human nature, evil and the control of a population through subtle means. With this there is still a lot of intrigue, and multiple aspects about the show to discover. So far the series has been a rather fascinating tale that is very unique in terms of its style and storytelling - for those who like mysteries with supernatural and science fiction elements, From the New World is a must see.

EDITOR'S NOTE: Since posting our original review of From the New World - Part 1, based upon our DVD review check disc of the final product, it's been brought to our attention that episode 13 on disc two of this volume's Blu-Ray release suffers from audio sync issues.

We've now confirmed that this entire episode does indeed suffer from an audio sync problem on both the English and Japanese language tracks of the Blu-Ray, and that this issue does not appear to be present on the DVD release. Although the audio sync problem isn't massively deleterious to the viewing experience, it is clearly noticeable, and as a result you can remove a point from our final score if you intend on picking up the Blu-Ray edition of this release. - Andy