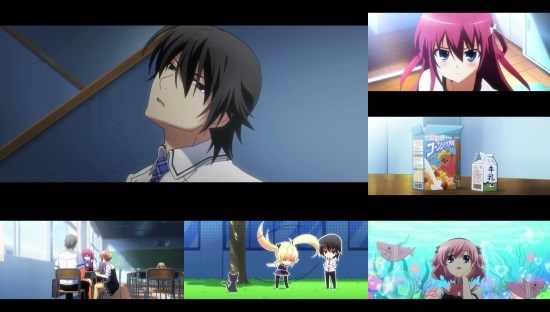 Stop me if you've heard this one before: An aloof male student transfers into a new school and suddenly catches the eye of every female cast member within five minutes of him stepping foot in the classroom. This same predicament befalls The Fruit of Grisaia's protagonist Yuji Kazami, simply due to the fact that he happens to be the only male student attending his school and that every female cast member happens to be the only other people within the school. What's meant to be billed as a “normal” school for “normal” students is suddenly thrown into question due to eccentricities and odd behaviours of the students, while protagonist Yuji trains himself in military fashion and brief snippets of his past seem to suggest working in shady areas as a hired mercenary. While some of the girls show odd behaviours, such as a girl trying to act Tsundere to the point of dyeing and styling her hair to better fit the character, a girl who is rather fond of breaking and entering and one who has a penchant for attacking people with a box cutter for no discernible reason. The anime makes a point of showing how odd and unique each of the characters are through their various interactions with Yuji.

This aspect not only makes up the show but is the only thing on display - so far, whatever plot The Fruit of Grisaia is meant to have is vaguely alluded to in favour of showcasing Yuji's round-robin interactions with each of the girls. Scenes jump back and forth between Yuji talking with each of the girls in a way that doesn't leave any character out but doesn't quite give any particular girl any extra attention or focus. From this it's hard to get too invested in particular character due to the way in which the anime handles their screen-time - just as one character is getting attention, the gears change and we see Yuji interacting with another in very haphazard transitions between scenes. Interspersed into the mix are a few comedic scenes which show several of the girls interacting with Yuji.

During these times the anime likes to play around with the art style, usually making character designs look simpler, brightening the screen and adding designs to the background. Most of the time it really stands out and clashes with the aesthetic the series has gone for but the juxtaposition somehow adds to the comedic value of these short scenes. Normally The Fruit of Grisaia has a clean yet sharp look to it, presented in a letterbox format, giving it an appearance more akin to a movie.

What remains to be seen from the series however is its actual plot. As stated previously, the series so far is mainly just a series of conversations with very little purpose other than establishing characters, providing some comedy and making sure each girl gets enough time on-screen so as to not offend already established fans familiar of the series through its visual novel roots. While the plot is unseen at the moment, there are a few scenes showing the briefest of glimpses into some of the character's back stories and hinting at a dark future plot. At this point, the main draw of the series seems to be its potential for some interesting plot development, as the characters alone are rather stereotypical and flit the line between being a cliché and parody. While there are characters who try to break the mold, not enough time and attention has been given yet for any of the characters in the show to be fully realised. In this regard each of the girls only have themselves and Yuji to play off, and the absence of any side characters and supporting cast gives the show a rather empty feeling to it. Characters are in rooms that are filled with between two to five people at any given time and the setting is an empty school that gives off a rather dull and lifeless motif.

The Fruit of Grisaia may not have the strongest starts and is a bit of a slow burner, but the character interactions and brief moments of comedy do enough to keep your attention while the plot waits to jump out from whatever corner it's hiding behind.

You can currently watch The Fruit of Grisaia in streaming form on Crunchyroll.

5
A slow start saved from complete ruin by its character interactions and the promise of a deeper plot that's yet to unfold.