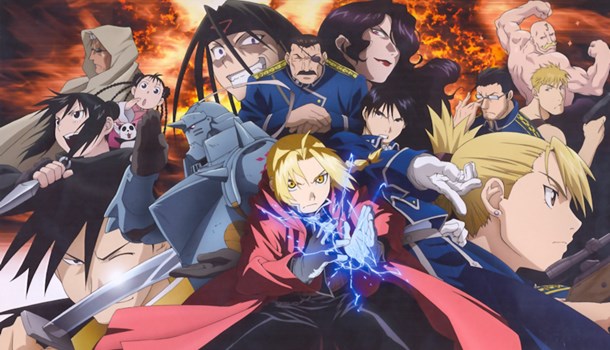 Was it really only March 2003 when the original Fullmetal Alchemist anime began broadcasting in Japan?  Six years isn't a long time by any measure, yet in that time Fullmetal Alchemist has already come to be regarded as a world-wide classic, even if the movie which followed on from the series branched off into some distinctly unexpected directions.

Yet the series is back already, dusted off and "rebooted" from the ground-up to become Fullmetal Alchemist: Brotherhood, and allowing us to once again regale in the adventures of the Elric brothers in their quest to return to their own, fully-formed bodies once again.  The general consensus is that this time around the series will stay far closer to its manga roots, rather than veering off into its own territory, but that of course remains to be seen.

Given that promise of starting again from the very beginning, episode one of Brotherhood may well leave you wondering if you've been duped, throwing us as it does into the midst of the action.  Edward Elric is already a State Alchemist, fighting alongside many of his colleagues who those of you that watched the first series will doubtless instantly recognise as they struggle to bring a man nicknamed the Ice Alchemist to justice, a rogue alchemist with a penchant for boiling or freezing people alive.  Not the kind of guy you'd want to invite to a dinner party, that's for sure.  If you're new to the Fullmetal Alchemist franchise, then all I can say is please don't let this potentially confusing opening episode put you off - It's purely there to satiate the die-hards who already know the story and characters, be it from the original anime and/or the manga.

With that opening showcase out of the way (and a pretty rip-roaring action-oriented episode it is too), we return via that wonderful vehicle known as the flashback to the start of it all - Learning about the Elric Brother's mother and frequently absent father, their mother's subsequent death, and of course the attempt at a forbidden alchemical transmutation to bring her back to life.  This results in Edward losing two of his limbs, while Alphonse loses his body entirely, saved only by his brother's quick thinking and ability to attach his soul to a nearby suit of armour.  All of this pain and heartache eventually leads Ed on the path to becoming a State Alchemist, given renewed hope of the possibility of regaining his limbs and his brother's real body by the mystical powers of the legendary Philosopher's Stone.  Come episode three it appears that they may have found the stone already in the possession of a supposed miracle-worker in a town called Lior, but all is clearly not as it seems...

If you're a big fan of the first series, then both the similarities and differences between Brotherhood and the original Fullmetal Alchemist will no doubt scream out at you instantly.  On the positive side, most of the major characters have retained the same Japanese voice actors, and their character designs remain instantly recognisable even if the artwork as a whole has a slightly different look and feel to it.  Ice Alchemist episode aside, the basic framework of the plot remains identical at this juncture too, although it has to be said that the focus which is placed upon certain aspects of it frequently feel very different.  The brothers attempt at human transmutation (and in particularly Ed's experiences as a result of this) are covered far more vividly, while at the other end of the scale Ed's State Alchemist exam becomes a formality that gets no more than a minute or so within episode two, rather than the more sprawling story that the first series brought us.  The Lior story arc also tells the same tale in a different way, placing more emphasis on the religion versus science question it raises while also simply covering the required plot points far quicker.

In essence, the biggest hurdle that Fullmetal Alchemist: Brotherhood has to clear is the obvious comparisons to the much-loved original series, a hurdle which is only made bigger by that series still remaining relatively fresh in the minds of many while also being just old enough to become rose-tinted amongst its fans.  Given this situation, it's actually very hard to separate what is simply different about Brotherhood from what is directly better or worse about it.  From my personal view as someone who watched and loved the original, it's a mixed bag - Brotherhood's pacing doesn't feel as consistent, and its temperament is also a little less of a constant as it veers more frequently into humour against the backdrop of a story that is really pretty dark at its core, yet certain portions of these opening episodes have surpassed what the original achieved in story-telling terms, and it probably goes without saying that there's potential by the bucket load for this series to match or better its predecessor.

At the end of the day, it has to be said that it's great (and not to mention exciting) to see the Elric Brothers back on our screens.  No doubt the debate as to the worthiness or timing of this remake will rumble on indefinitely as is always the case with such things, but for the time being these first three episodes of Fullmetal Alchemist: Brotherhood can be labelled as solid without ever proving to be spectacular.  The really interesting aspects of the series are still some way off into the future however, and its how the story progresses further down the line that will really make or break this anime.

7
A solid return for the Elric Brothers, but whether it can scale the heights of its predecessor remains to be seen.
LATEST REVIEWS