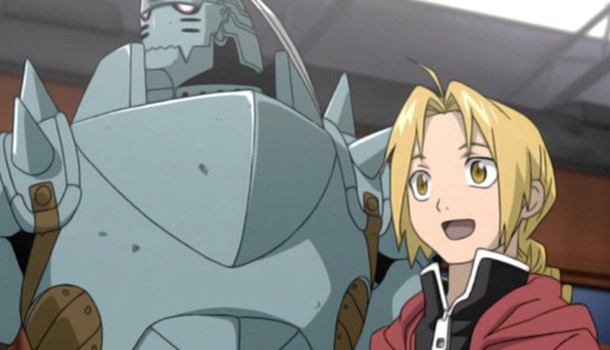 I never saw it coming.

When I looked at volume 1 of Full Metal Alchemist, I was happy to report that it was a fine, action packed anime series, with plenty of levity and the odd scary moment, but I really didn't see anything to get overly excited about. The characters are fun, the Elric brothers make sympathetic leads and there were shadowy figures lurking in the background promising intrigue in later volumes. So far so good.

With volume 2, the brothers set off to take the State Alchemy exams, and after surviving the atempted hijacking of their train, meeting some interesting new characters and kicking some ass, they arrive to stay with another alchemist and prepare for their exams. However, with a serial killer on the loose and a mysterious stranger in town, things are not as clear cut as they might seem.

And this is where FMA takes you by surprise - whilst it is indeed a fun and action packed series, it also hides its true face, a series with far more punch than you might expect. Where Kino's Journey has a meloncholy air that permeates every scene, and as such you expect to see the unusual, FMA is downright deceptive, and when it reveals its final, heart-rending scene in episode 7, I defy anyone to claim they aren't moved by it.

Full credit to the English voice cast too, who deliver understated performances which are far more effective than the over-the-top villainy of earlier episodes.

What impresses most about this volume is its ability to mix the childlike nature of the Elric's with mature and menacing themes of authority, responsibility and our inner demons to create a series that really does speak to you, and in that respect it out-performs even Trigun.

And I never saw that coming.
10
Superb.