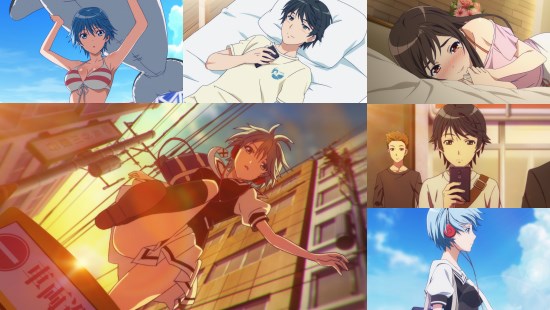 For all of the benefits smartphones have brought to our daily lives, it has introduced some notable dangers - not least the risk of someone walking into you because they're too busy staring at the device in their hand. If you've ever found yourself bemoaning those people who focus on their phone rather than the path ahead, then you might have a choice few words for Yuu Haruna, a Twitter addict who spends most of his days updating the world about his every move.

Then again, the collision which precipitates the events of Fuuka aren't exactly his fault - he is the victim rather than the culprit as a headphone-clad girl in a massive hurry barrels into him. In the ensuring confusion, she instinctively assumes that Yuu is holding his hand in his phone to grab a picture of her underwear while she's prone on the ground, and angrily smashes said phone before racing off.

Of course, if that was the end of the story we wouldn't have any more than a two-minute short on our hands, so of course Yuu meets this girl again in another situation which causes his phone to come to harm, this time being tossed from the school roof. However, the girl in question - Fuuka Akitsuki - realises that she may have been a little harsh and ultimately goes to hunt down and find the missing phone by way of an apology.

So begins a growing friendship between the two, born initially from a series of coincidences but increasingly from the fact that these two individuals both complement one another quite nicely, with each making up for what the other lacks. Any burgeoning relationship might be about to get decidedly more complicated however, as Yuu's childhood friend Koyuki Hinashi comes into the frame in spite of her place as an up-coming singer with a promising career ahead of her.

From its first episode alone, Fuuka feels like a series that is absolutely desperate to grab its audience and make them rush out to pre-order the Blu-rays, and it does this in the most brazen manner possible with a cavalcade of panty shots and girls in their underwear - it's almost hilarious the lengths its narrative will go to to ensure that it shoe-horns gobs of fan service into every corner of its production. Thankfully, things calm down noticeably from there, and although that male gaze remains present it is significantly diminished and far less distracting over subsequent episodes.

Unfortunately, this shift also lays bare the truth of these early episodes of Fuuka - there actually really isn't much else here to look at. Our protagonist isn't so much a milquetoast lead as just plain boring, with little discernible or interesting personality to speak of, and Fuuka is your typical energetic and loud girl without much in the way of notable traits herself. The series is slowly but surely padding itself out with more equally dull characters - a male love rival who most certainly isn't, and of course Koyuki who has thus far added absolutely nothing of value to the series beyond "looking cute".

This really doesn't bode well for a series that is, by the end of episode three, trying to set up and sell you on a dramatic love triangle between Yuu, Fuuka and Koyuki - I frankly couldn't care what happens to any of them or who they end up with, and the series at this juncture is going to have to work hard to make me think otherwise. Compare and contrast this to some of the classic romance-led anime series - Toradora or the recent Yuri on Ice - where characters are dripping with personality and make for unique partnerships - and Fuuka couldn't fare any more badly in comparison.

Alongside all of this there is some more promise to the show's musical leanings, with shades of Beck as Yuu looks likely to be dragged into the world of music via a band led by Fuuka, but thus far all of this almost feels superfluous to the main plot and drawn in at the last minute to give the series a hook - again, it'll have to do a lot more than its early episodes have attempted to make an interesting narrative from this.

Even in terms of its presentation, Fuuka feels by the numbers - the show is animated well-enough and its character designs are passable, but missing the edge that makes the original designs from the manga the show is adapted from exhibit. The show's music is also all forgettable, which is decidedly worrying given its focus.

All of this combines into a disappointingly mediocre series thus far. In fairness, it's only at the end of episode three that we finally get any kind of dramatic cliff-hanger to pique our curiosity, but even this is the most clichéd and overused scenario that only raises further questions about the completely lack of originality the series has displayed in these opening three episodes. If Fuuka is trying to make beautiful music from its story, it really isn't working - so far it sounds more like a one-man band falling down a flight of stairs.

You can watch Fuuka in streaming form on Crunchyroll.

5
With little to make this show's characters and scenarios stand out, Fuuka thus far is a picture of abject mediocrity.
LATEST REVIEWS