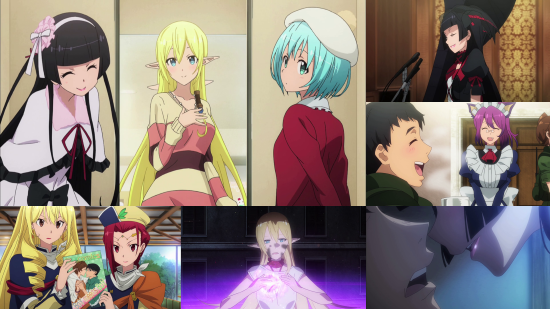 Culture shock is the common name for the kind of personal disorientation and confusion that abounds when you encounter a place that is completely different to what you are used to. It happens to all of us - when we are going on holiday to when we are emigrating home. Even something as simple as going from a quiet place into a major city without a proper transition can thoroughly scare the bejesus out of you. So imagine how it must feel for the ladies of the empire and the other realm when they are brought into the bustling metropolis of Tokyo for a sightseeing visit and peace talks.

GATE continues with the expeditionary force assisting with a conflict in the sloped walled city of Italica. After the SDF defeated the Empire’s forces at the Gate, many of the soldiers abandoned their posts and became bandits, eventually forming up and assaulting the town of Italica. The SDF are roped into helping thanks to a budding relationship between Itami and their brigade leader Princess Pina Co Lada. Don’t laugh. No, really, don’t. Medieval war is waged, with the city besieged by the enemy forces and the gates stormed. The situation is grim, but as the rest of the series has shown there isn’t a lot that medieval armour can do against a 50 calibre bullet or a helicopter mounted mini-gun. Shock and awe ensues as the SDF annihilate the enemy, saving the day while Rory, the priestess for death (which she delivers in massive quantities thanks to her war axe) orgasms as she absorbs the departing souls. Just the voice acting alone left me with just a little bit of a trouser situation.

Rory’s “O” face sets the tone for what comes next. It has now become more obvious what the true nature of this anime involves. Yes, it is full of war, combat, nationalism and praise about how “Japan is great”, but actually GATE is about nothing more than this harem of girls and how they get on, just with a bit more story and plot than is normal for this situation.

This victory and assistance of the Empire leads to the first discussions between the parties which naturally takes place on the other side of the Gate. Thus begins probably the most fun arc of the series to date - what happens when you take many pretty girls from a fantasy world and, all expenses paid, let them loose in Tokyo. Of course whilst purchases of gothic lolita outfits, books on science and new shoes were made, so the trip was also festooned with mountains of BL doujinishi, described as being “high art”. Gotta love the rotten girls, eh? In all seriousness, in addition to their discussions, the girls are brought in front of an inquiry in the Japanese Diet (Parliament) to discuss the incident with the fire dragon to help back up Itami’s story. During this rather entertaining event we watch Rory have fun. I must say, watching a woman, who turns out to be a demi-god over the age of 900 years old, verbally castrate a minister who thinks she is being “nice” gave me the shivers. Almost as many shivers as watching her getting all hot and heavy later on... She is wise and intelligent and has an aged yet perpetually young body, but she has the experience. What more could Itami honestly ask for? Well, I think his ex-wife, Tuka, a certain cocktail princess and Leilei might have something to say about that...

As discussed in the review for the first few episodes of the series, I felt like this show had a very nationalistic air about it with a series full of pro-SDF, pro-militaristic intervention policies. This hasn’t reduced - if anything, it has morphed into a message of superiority which kicked in especially hard when the delegation from the special region came through and they were hit with the sheer power of culture shock. Having been hit with the same sensation on my first Japan visit, it's quite something to be standing in such a huge city and be surrounded on all sides by polished glass and throngs of people - I remember the first words out of my mouth were not too dissimilar as to what came from the girls, maybe with less “amazing” and more “$£@% me”, but you get the message. The feeling that someone is trying to show that Japan is better than everyone else comes out when the other countries’ paramilitaries attack. I am not entirely sure where the SDF’s marines come on a world ranking, but could they really dispatch a full set of US Navy Seals without taking losses? I am most likely reading too much into it, especially since the idea is already in my head, but with the pro-military intervention policies going through the Japanese Diet, I do wonder whether this writing is actually intentional. I suppose I really ought to go read the manga upon its western release from Sekai Project and find out as to whether this is a writing style unique to the anime or whether it has infested the manga as well.

GATE, amongst other anime, has been one of the highlights of last year's summer season. The series has had an excellent mix of comedy, action and thrills, mixed with likeable characters and a half-decent story. Admittedly, where the series is actually going is beyond me as future storylines are a bit of a mystery, but so what? As long as the series keeps being interesting, and as long as they keep some of those cute animal-eared girls involved mixed with plenty of Rory Mercury, I am pretty much sold. Although this series has now finished, part two is about to begin in 2016. What this will bring? Only those who have actually studied the manga will know. For now, I’ll just sit here and wait, and try to not obsess to much over a certain demi-goddess...

You can currently watch GATE in streaming form on Crunchyroll.

7
GATE continues to be fun, albeit with some odd messages.