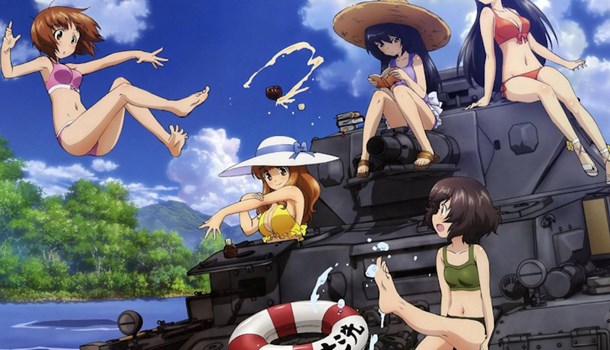 Something that defies your expectations is walking a dangerous line – it’s so easy for a show to lose an audience who were expecting one thing but then don’t get it. But at the same time it can also lead to something great. This is the line that’s being walked by Girls und Panzer.

Coming from the character designer and historical advisor behind Strike Witches and a title which evokes images of fan-service-strewn battlefields it’s very easy to have a lot of preconceptions about the series. However, look a little deeper and you’ll find production duties are being handled by some of the same staff as Girls und Panzer's closest anime relative – Saki. That’s right, this is a sports anime!

Things kick off exactly as you would expect – Miho Nishizumi transfers into a new school to start her high school life but almost as soon as she hits campus she is accosted by the student council and ordered to join the schools newly reforming tankery club (yes it is actually called tankery and is apparently the traditional hobby of a refined lady in this world!). Although she is initially resistant to the idea she is eventually persuaded to join and, as this is a sports show, she naturally turns out to be an expert in tanks thanks to some family back-story that the first three episodes haven’t quite gotten around to fully yet.

Miho is joined by a variety of colourful girls, each of whom is assigned to a team for one of the school's five tanks which will be used to face off against other schools once the practise match/training section of the anime is done.  From Mako, the lazy but brilliant driver to Hana who has a somewhat.... amusing reaction to discovering the feeling of being in a tank when firing the main cannon. As of yet the girls haven’t really had all that much screen time to develop beyond their base features as the series is very much still in set-up mode, but they’re all cute and funny so you’ll almost certainly enjoy watching them develop as the series goes on.  As well as all this there’s a big reveal at the end of the first episode about the setting that I won’t spoil but you’ll be desperate for them to explain more about it (though it isn’t mentioned much in the following two episodes).

The show is well animated and the character designs are all very distinct with that Saki-esque feel of pushing them as far as possible with lots of unique costumes and hair choices to keep you entertained. All of this is totally overshadowed by the tanks themselves however - these are rendered in CG for the most part and have an insane amount of detailing on them. All based on real-world models, I would put heavy money on these being as exact a replica as you could reasonably get, and there's a constant stream of technical specifications rolling throughout the dialogue that’ll keep the most hardened tank nut happy. There is a real sense of weight to them too, which sells the show and its concept and supports itself with some great sound design. The interiors don’t skimp on the design work either with the cramped quarters forcing the cast to operate as a real tank crew would.

If there is anything that I could criticise about the series it’s that it does overload on the tank love a little too much, and it would be nice to see a bit more character work as the girls really are an engaging bunch with a lot of potential, but then again the beach and training camp episodes are all but inevitable so I’m sure that this will come along soon.

To conclude then, I am loving Girls und Panzer so far. In what’s turning out to be a very strong season this is definitely one of the shows to keep your eye on!

8
This fun series will keep you hooked through the long, cold autumn!