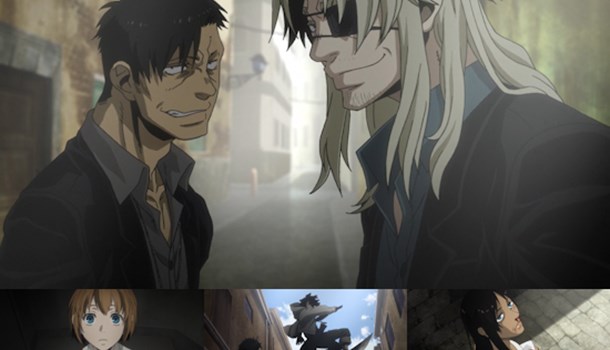 Just what is it about dark, seedy underworlds that we find so compelling? Whether it's the den of iniquity that is Roanapur (the home of Black Lagoon), the black market arms dealing of Jormungand, or now the hive of gangland crime and poverty that houses Gangsta, there's something oddly glamourous about the anti-heroes of these worlds that we wouldn't ever want to find ourselves in.

In the case of Gangsta, adapted from Kohske's manga of the same name (available in English from Viz Media), we're left in no doubts from its first episode that its world is a grubby, dangerous place to live. Prostitutes roam the streets out of both a desperation to make a living and a desperate fear of the violent men who rule over them; the police are openly corrupt and in the pockets of organised crime; and if you look at someone the wrong way you're liable to be looking down the wrong end of a gun before you can even think about uttering an apology.

It takes unique characters to hold up within such relentlessly depressing surroundings, and the stars of this show are two of them - a duo known as "Handymen" who will fix any problem you have for a price, as long as you don't mind a little (or a lot of) bloodshed. Between the smooth-talking, enigmatic Worick and the taciturn, short-tempered Nic, our dual protagonists are chalk and cheese, and although they think nothing of working as a gigolo or carving people up with a sword respectively, there's still some inherent sense of justice in the way they go about their business however gristly it might be.

This sense of skewed but notable humanity to the duo's actions also quickly becomes clear as they move to save a woman forced into prostitution named Alex. As her pimp's gang is slain in the course of the Handymen's work, Alex effectively becomes their "receptionist", offering her food and shelter in the process and perhaps offering an opportunity for her to start anew - first, however, she'll need to break the remaining shackles left in place by the results of her unsavoury past.

As if that wasn't already enough to be getting on with, there's a whole other level to Gangsta, for Nic is not simply strong and fast; he's super-humanly so. In fact, he's what is known as a Twilight, an individual who has gained great powers as a side-effect of a drug called Celebrer; an event which also causes damage to other parts of the body as a result. In Nic's case, it is his hearing which has been impaired, leaving him virtually deaf and needing to use sign language or lip reading to comprehend what others are saying.

The existence of these super-human Twilights has in turn had major social impacts upon this world, with individuals exhibiting these powers effectively treated as slaves before legislation was enacted to offer them equal rights. The result is an uneasy relationship between Twilights and "Normals", with the former often working (as in Nic's case) as guns for hire, known as "Tags" and graded according to the potency of their abilities, and using a cocktail of drugs to control their ability in spite of it shortening their lifespan. This only adds further complexity to a world of rival gangs with various territories and rackets to protect, and when opposing groups or the Tags known to be part of those groups come to blows, to say that things escalate quickly would be an understatement.

There are a number of reasons why Gangsta makes for such compelling viewing, but the manner in which it treats the complexities of its subject matter is one of them - the idea of "mutants versus normal people" certainly isn't new within fiction, but it offers up plenty for the show to get its teeth into whether it's grit and violence or the more sensitive side of the barriers which the definition of a group being declared as "abnormal" throws up. Indeed, this latter point is well-realised in the relationship between Worick and Nic, as what initially just seems like a well-oiled business partnership runs much deeper, and episode after episode uses flashbacks to pull back the curtain on how this pairing came to be acquainted as youths and the tortured pasts which brought them together. Even six episodes in we haven't been fully appraised of their past, but the viewer is left wanting to know more to piece together their history.

Much like the aforementioned Black Lagoon and (perhaps more notably) Jormungand, Gangsta also has a very effective aesthetic too - it's a grim, grey world where the brightest colours on show tend to be red splatters of blood, but it adds plenty of atmosphere and a tangible reality to proceedings even when individuals are leaping insane distances and moving at incredible speed. The show's action is satisfying when it breaks out, and most importantly its direction is superb without, filled as it is with carefully chosen and occasionally abstract shots which always managed to evoke the required intensity of drama or emotion it aims for. Gangsta isn't the best-looking show you'll see this year, but it does a vast amount with what it has.

Special praise also has to be reserved for the presentation of Nic within the series - as a hard of hearing character, this aspect of his character could easily have been either played down to make life easier or played up to manipulated the viewer. As it is, he's expertly placed within the series, accentuated by a pitch perfect performance from his voice actor Kenjiro Tsuda whose intonation matches what you'd expect of someone who has never been able to fully here their own speech or those around them. Hard of hearing or not, Nic is still a badass, and his story thus far has never been overly reliant on his disability to put his situation across.

With its presentation proving so compelling from its brash, incessant opening credits onwards, our only real concern about the series is where it plans to ultimately head - even halfway into the series we're still only piecing together parts of the show's big picture, and it's yet to entirely layout what it wants to say or wishes to travel in the long-term. This isn't necessarily a bad thing in itself, but there's always that nagging concern that the show may meander down a path which strips away much of what has made it engaging so far.

That, of course, is a question for another day however, and what we have in front of us now is certainly one of the summer's most enjoyable anime - it carries itself with confidence and attitude, bringing us strong characters and a scenario that has immense scope to tell plenty of stories within its gritty underworld. Gangsta feels more grounded that the larger-than-life antics of the Lagoon Company (to end on that comparison we began with), but it still has character in spades to entertain and fascinate in equal measure. This is one dark place you'll be keen to shine a light on and watch, albeit from a safe distance separated by a TV screen.

You can currently watch Gangsta in streaming form on Viewster.

8
A well-realised world filled with strong, engaging characters makes Gangsta a rewarding viewing experience, even if it's keeping some of its narrative cards close to its chest.
LATEST REVIEWS