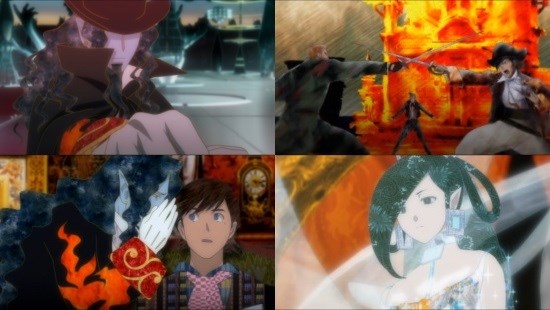 Based on the classic novel by Alexander Dumas, Gankutsuo takes The Count of Monte Cristo and puts a sci-fi and supernatural spin on things by setting it 3,000 years in the future. Having been the inspiration for various stories and parodies, The Count of Monte Cristo is one of those pieces of media that has found its way into public consciousness wherein many will not realise they actually know the main plot of the story even without having read its source material. For those unaware, a quick summary of The Count of Monte Cristo is that it revolves around a man seeking revenge against his old friends for his wrongful imprisonment for crimes he did not commit - a story which acts as the basis for many revenge tales due to the strength of the work of fiction and its popularity since the novel's debut 170 years ago. Whilst the original novel has the Count of Monte Cristo himself act as the main protagonist, Gankutsuo takes a slightly different approach with its narrative style.

Instead, this series gives the role of protagonist to Albert de Morcerf, a young French nobleman who meets the Count during a festival that takes place on the Moon. After rescuing Albert from a gang of local bandits, the Count asks for Albert to introduce him into Paris' high society. There begins the Count's integration into society and the set up for his eventual grand scheme. The way that Gankutsuou portrays the story is with Albert taking the role of protagonist and The Count himself as the deuteragonist/antagonist of the story. Rather than taking the cue from the book to begin things in chronological order in order to set up the Count's character, Gankutsuou begins at a point quite a way into the book in order to give a unique perspective on it, leaving things rather vague and down to viewer interpretation. This in turn gives the Count a rather mysterious quality to his character and gives a bit of depth to the story for those both familiar with the source material and entirely new to it. It's a rather bold choice that works really well to establish Albert as the clueless protagonist that is discovering things as the story progresses, and  it also allows the audience to share in the discoveries of the cast. Due to the nature of the series, this provides some great twisting and turning moments that escalate the drama.

Gankutsuou chooses to deliver these moments is through a very distinct style that is both futuristic and classical in its approach. The world of Gankutsuou is an odd amalgamation of 3D CG spaceships, hologram computers and machinery that feels more alive than mechanical, mixed with clothing and decoration that looks like a canvas from a painting blended in to create a visually striking style. The whole show looks like each character has their clothes set to represent a painting and as they move they display a certain part of it. While the character models are rather ordinary and not detailed on their own, combined with this unique approach and art style it gives a rather beautiful look that is admittedly an acquired taste. With this detail in the art the series looks stunning on Blu-ray - the art flows gracefully in the shots, the world feels vivid and detailed and the visuals are a real showcase for what can be done with a simple idea.

Beyond it's distinct art style, Gankutsuou also has a great story and cast of characters to help move things along. From the source material of a classic novel, the show itself does a remarkable job of delivering the most vital aspects of the story but also manages to put it's own spin on things. Credit needs to be given to the conversations and the ever-shifting relationship dynamics between the characters. Since most of the series takes place in Paris there are a lot of discussions on French society, nobility, "noblesse oblige" and appearances. This comes to the fore mainly through Albert and his best friend Franz contemplating the arranged marriages they have been forced into for financial gain and societal obligation. Alongside this, the main relationships that factor into the show are the ones between the Count and Albert, Albert and his friends, and their parents and the Count. For the most part the relationship between the Count and Albert is given the most attention with their bond taking on that of a student and mentor; father and son; friends; enemies, at times even verging on something deeper. There's a real sense of admiration, respect and love from Albert which really contrasts with the Count's actions, making the Count a more monstrous character than he first appears. Tied into this is the show's supernatural element, which is briefly touched upon in the show with many characters commenting on the Count's odd appearance, mannerisms and general aura, adding more to the mystery of the character.

With regards to the show's presentation, one thing of note about the whole endeavour is the moments when it goes over the top. With uch a unique visual style, its penchant for the theatrical and how things escalate more and more as the series progresses means that the series walks a line between being deadly serious and rather comical. The drama in some scenes takes on a whole new angle due to how ridiculous they can also be. One example presents us with two characters, one of which is dressed in a flamboyant outfit that makes them look like a pirate, who then have a sword fight on a cliff overlooking a pool of shark-infested water. All of this takes place in the Count's basement of his lavish town house of all places. As the series progresses things only escalate from there - for those who love a series with a flair for the theatrical and then ramps things up to a grand climax, this is a show you can count on giving you a thrilling viewing experience from start to end.

Bold and stylish with a penchant for the theatrical, this is an excellent reimagining of a classic novel. For those looking for an anime that is different from the norm with a unique art style and source material far from the usual manga or light novel fare, then this ticks all the right boxes.

9
Bold, stylish and compelling - an excellent adaptation you can count on enjoying.