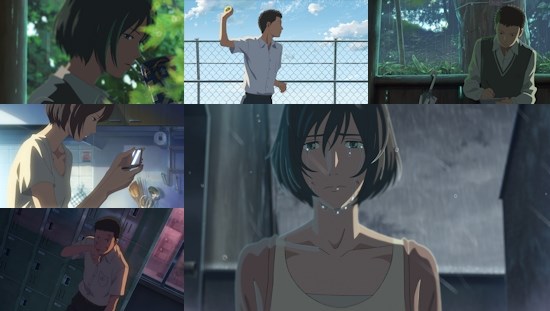 After arguably venturing outside of his comfort zone, albeit to explore some familiar themes, with Journey to Agartha (aka Children Who Chase Lost Voices), Makoto Shinkai returns to a more personal setting and theme for The Garden of Words, a short film that is a love story in the purest sense.

The film opens as we follow a pretty typical teenage boy - apathetic about his education and with a vision of what he wants to do with his life that sits outside the normal range of professions that this education is set out to prepare him for (he wants to be a shoemaker), he'd really rather spend his days sitting quietly and sketching out shoe designs than dealing with classroom life.

Escaping to a picturesque park one rainy day so that he can do just that, Akizuki finds that he isn't the only person hiding away from the hustle and bustle of the wider world, as already present in his favourite spot is a young woman who sits quietly munching on chocolate and swigging back beer. The two of them do little more than exchange pleasantries aside from the casually thrown out quotation on the woman's part as she leaves, but come the next rainy day so the two of them meet again.

As time goes on these ever-more frequent meetings during the rainy season become less about escaping into their own personal bubbles for the two of them and more about the pair meeting to chat about nothing in particular, and before we know it both parties are effectively praying for rain so that they might meet again. Praying will get you nowhere once the rainy season passes and the summer begins however, and the mystery surrounding the circumstances of the woman's presence of the park is about to be exploded in the worst possible way for Akizuki.

In a world where so many animated takes on romance are either love at first sight or some girl literally falling on the protagonist, The Garden of Words is refreshingly simple and organic in the growth of its love story - a chance meeting turns to idle conversation turns to repeated meetings, which itself leads to an unspoken electricity between the two leads as they both know why they head to same park every time in rains but dare no verbalise it. Indeed, for a film called The Garden of Words the real key to much of the film is what the main characters don't say, leaving a heavy sense of tension and attraction that is never explicitly acted upon or spoken out loud even as the film closes. The whole thing feels so natural in its progression that you can't help but feel what the main characters feel as their relationship develops, creating a largely serene yet powerful narrative that delivers a climax that will almost certainly leave a lump in your throat.

The film also does a good job of avoiding the feeling that this growing relationship is an uncomfortable one to watch - a love story between a 15 year-old boy and a woman in her late twenties could so easily have felt creepy or simply unrealistic, but the way both characters are painted ensures that this is never the case. Akizuki is wise beyond his years and a down to Earth individual (albeit still one prone to moments of immaturity), while his foil openly admits to being immature in spite of her age - together, it's always easy to believe the attraction which builds between the two of them.

Thus far, I've managed to avoid discussing the visuals of the film, and that's simply because I didn't want to start this review by gushing adjectives like a fountain. Put bluntly, every scene within the film is absolutely sumptuous to look at, with an incredible amount of detail put into every aspect of its landscapes, backdrops and inanimate objects, while the main characters are imbued with a nuanced and fluid body language that combines with that overall level of detail to create something which is unlikely to be surpassed any time soon. It's the little touches that really accentuate not just the aesthetic of the film but its story-telling as a whole - the effects of rain upon the environment, a tree branch dipping subtly into a lake - and to be honest this is a picture that can't be painted with words, you simply have to see it for yourself. Even if you aren't a huge fan of Makoto Shinkai's work, there's probably a good argument to be made for watching The Garden of Words just to soak in its visual splendour.

With some strong voice acting performances and a decent script and pacing to carry it along, I'm going to go out on a limb and say something controversial here: this is Makoto Shinkai's best work by far. With a tighter focus than Journey to Agartha and a more satisfying ending than 5cm Per Second right down to its closing song, everything about the film works almost flawlessly and provided your even slightly invested in its characters you'll be drawn in and swept up in its emotionally resonant story. Is The Garden of Words a small but perfectly formed masterpiece? You know, I think it just might be.

The Garden of Words was screened in Edinburgh as part of Scotland Loves Anime 2013.  It will be released fully in the UK via Anime Limited.

10
Visually beautiful with a touching story to match, this short film is a triumph that lays a genuine claim to being Shinkai's best work.
LATEST REVIEWS