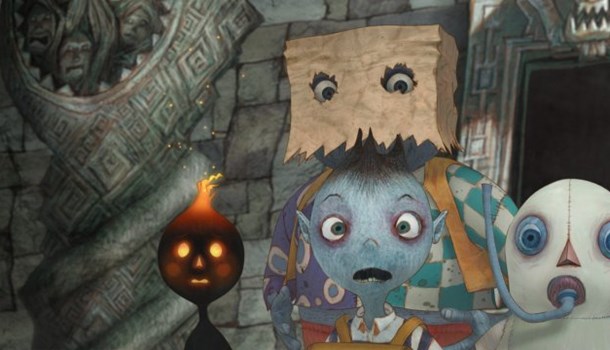 If I told you that there was a single blu-ray disc which was filled with works from some of the biggest names in anime, comprising twelve short episodes, each completely different in their art and direction style, you might call me mad.

People call me mad anyway, but I prefer to think of myself as a mad genius. However, after watching a few hours of Genius Party and Genius Party Beyond, I am beginning to think that I may be tooting my own horn a bit too much.

To clarify, there are two features on this disc: Genius Party and Genius Party Beyond. Genius Party contains seven shorts, covering a wide variety of topics such as: evolution, the circle of life, wish-granting magical wands and zombie school children. Which is a small sample of the themes found within. All of this is condensed into a couple of hours. Genius Party Beyond contains a further five features, which didn’t make the cut on Genius Party. Not to be outdone by the first feature, Beyond gets even more bizarre by exploring the growth of a seed, treasure hunts on the moon, pan-dimensional teddy bears and more.

I was saving these two features for a Saturday when, not only I was awake enough to appreciate them but also had a stock of gin handy. After-all some of these episodes are perhaps a little hard to digest, unless the mind is properly lubricated. But enough of my coping strategy, lets get down to the meat of the review. The highlights and lowlights of this pair of features.

These first seven episodes feature the talents of well known directors such as Masaaki Yuasa (Lu Over the Wall, Night is Short Walk on Girl), Shinichiro Watanabe (Cowboy Bebop, Space Dandy), and one of my favourite directors Shouji Kawamori (Macross Series, Aquarion), to name but a few. Each of the directors add their own spin to their episodes in terms of the writing, art, and direction. Half the fun of watching this release is trying to work out who did what.

My personal highlight from Genius Party is a tossup between Baby Blue, the seventh short, and Shanghai Dragon, the second short. Baby Blue was a story of a young boy and girl, friends since they were children, who decide to ditch school and go on an adventure to the beach. Along the way they are attacked by thugs, have bicycle chases with rampaging policemen, and simply enjoy each other’s company. This is all accompanied by a wonderful Yoko Kanno soundtrack, and it is supremely pretty to boot. Shanghai Dragon is the more bizarre of the pair, in so far that a five year old finds a magical space pen and uses it to fight aliens with the help of two futuristic cyborgs. The art direction took some time to get used to, but the mecha design of the aliens, and the transforming mothership (nice nod there Mr Kawamori) was pretty damn cool.

Happy Machine, the sixth feature, is quite nice in its own unique way. While not Masaki Yuasa’s most recent work, it retains his style and reminded me heavily of Lu Over the Wall. It was a nice little story, if a little odd.

The low point is perhaps the fifth short, Limit Cycle. This features a monologue, which overlays a spectacular series of scenes as a man figures out what the purpose of existence is. It is unfortunately also incredibly boring, pity really.

It is of note to also say that the opening short, Genius Party, sets the tone just nicely. Taking place to the backdrop of a wicked beat, though it is a bit of a strange little tale. It is completely without dialogue and stars evolving rocks, with glowing runes. Utterly bizarre, but I found that it put me in the right mindset for what was to come.

Out of the seven features only one was a bit of a let-down, which isn’t a bad hit rate at all.

Beyond has a further five episodes from well known directors, this time featuring names such as Tatsuyuki Tanaka (mostly known for animation on Akira and Riding Bean), Mahiro Maeda (Gunbuster) and Shinya Ohira (Mind Game).

The stories on this sequel are different again from the first Genius Party, though in some ways they are perhaps a little smarter. The first short, Gala, follows a village of mythical creatures as they combat an invading and growing entity, which crash lands near to them. This is followed by Moondrive, which is basically a crazy treasure hunt adventure set on the moon. Both have their unique twists which they keep hidden all the way through, both are beautiful in their own way, and both are lots of fun. The music for Gala is especially good. Though given it is a story which centres on music as a weapon I had expected the background tracks to feature the instruments being played on screen.

The most beautiful short on Genius Party Beyond is Dimension Bomb, the final feature. While the story makes little sense - to the point I found that it was better to turn off the subtitles - the visuals are mind-meltingly beautiful. The stunning visuals are paired with an equally powerful and atmospheric Juno Reactor soundtrack. Dimension Bomb provides twenty minutes of audio and visual splendour. The final highlight, Toujin Kit, is both bizarre and atmospheric, as it involves the creation of soft-toys stuffed with pan-dimensional creatures. It is certainly weird, but very gritty with a nice cyberpunk vibe.

My only disappointment in this second set of shorts was Wanwa the Doggy, Shinya Ohira’s episode. I found this one hard to follow, dull, and the animation style did very little for me.

Collectors Edition includes the anthology in Japanese, both bluray and DVD discs and a 144 page book which features the making of and production of the episodes.

There are no extras on the discs.

8
A wonderful showcase from the anime industry’s greatest directors