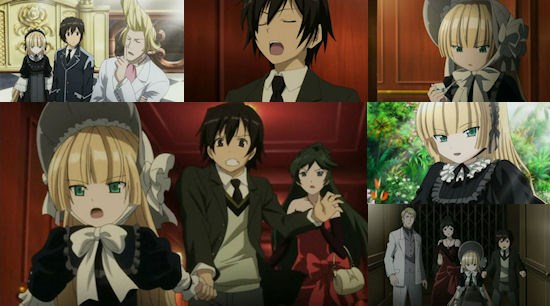 To begin this review, a confession - I'm a sucker for a good murder mystery story, especially when said crime is carried out in a seemingly impossible "locked room" fashion.  That makes me a prime target viewer for Gosick, part of Crunchyroll's winter 2011 line-up and one of the more cringe-worthy attempts at making an English pun we've seen from an anime series in quite a while (Gosick is a play on the word "gothic", but with a nod towards its horror elements via its actual title, in case you're wondering).

Like so many classic detective stories, Gosick leverages Europe as its setting - more specifically, 1920s post-Great War Europe, and a picturesque fictional country named Saubure who came out on the winning Allied side within that conflict.  Our protagonist here is a newcomer to the country named Kujo Kazuya, a Japanese living in Saubure who has already earned himself the ominous and rather harsh nickname of the "Dark Reaper" on account of his jet black hair and dark eyes.  Needless to say, given that reputation based on his appearance it's tough for Kujo to make any friends in this foreign land, an isolation which indirectly leads to him meeting a girl named Victorique, a doll-like girl with an attitude to match her brilliant mind, particularly when it comes to (you guessed it) picking through the chaos of a crime to instantly deduce a solution and the probable perpetrator.

While the first episode sees Victorique solving a crime simply based upon its description provided by eccentric detective Grevil de Blois, a frequent visitor to her library hideout, the story arc which develops from this and fills out the first three episodes of the series sends Kujo and Victorique on what initially looks like a jovial jaunt on a boat but ends up with them mired in a dangerous and almost literal game of cat and mouse where nobody can be trusted and anyone could be the next victim of what appears to be a bloody attempt at recreating old history.

It's when Gosick hits the road that it also starts to open up flaws in its story-telling abilities however - while the first episode allows us to get to grips with its characters and offers up some tantalising locked room mystery solving, episode two and much of the third instalment feels like weak sauce in comparison, bringing us strange goings-on that barely require the rubbing together of a couple of brain cells for the viewer to solve let alone Victorique's genius.  Thankfully this rather glaring issue is smoothed out a little by a smart ending to the story arc, but its clunky and clumsy plot development up to that point isn't one that's easily forgotten and it certainly doesn't bode well for a series that is so heavily reliant on sharp, compelling story-telling.

On the plus side however, we have Victorique.  In a word, Victorique is fantastic - her character is a wonderful mix of vulnerability and pretentiousness which Gosick rarely forgets to drill in to for comedy, pathos or something in between.  Add to that her self-satisfied explanations of even the most impossible to solve aspects of a crime in that wonderfully refined voice (more often than not while pretending to smoke a pipe) and you have one of the most engaging anime characters of recent years.  Never mind whether or not she looks cute in her gothic lolita outfit, I'm sold on her charms and I'll accept no arguments on that front.

The question which rises from this is whether a single character's brilliance is enough to carry an entire series?  In Gosick's case, for these opening three episodes at least, I'm sad to say that the answer is no.  Don't get me wrong, Victorique adds a wonderful amount of entertainment value to the show so far, but that doesn't really hide the fact that Gosick is struggling to make the most of its core concepts, that being its blend of murder-mystery and horror elements.  To be anything close to the high-quality series we were hoping for, Gosick needs to sharpen up its story-telling substantially - something that isn't impossible as the series shows flashes of what it could, nay should, be; flashes of genius aren't good enough to make for something memorable though.

6
Victorique's character scores an 8, but she alone isn't enough to cover up some of the bigger flaws in this show's early episodes.
LATEST REVIEWS