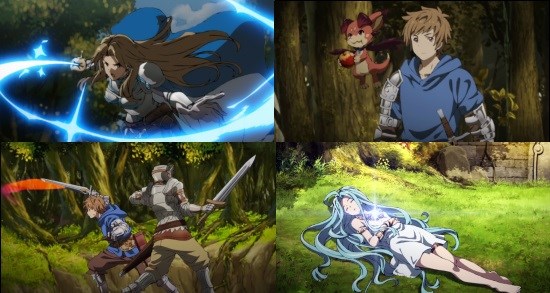 Boy, there sure are a lot of fantasy shows this season, huh? If nothing else that's certainly going to make it pretty awkward for a show like Granblue Fantasy to stand out from the crowd, especially when it's also presently competing with the recent re-releases of Claymore and Berserk in the UK anime space. So, let's take a closer look and see if the opening gambit of this mobile game adaptation prior to its real landing in the spring can make a big enough impression.

Stop me if you've heard this one before - a young girl with a mysterious power is being held captive aboard an airship. During her escape she happens to fall to earth near a small village, where a young man who dreams of bigger things befriends her and tries to defend her against the shady people who are trying to recover her. No, don't worry this isn't a direct rip-off of Laputa: Castle in the Sky, the show has just gotten its nose firmly embedded in the big book of anime clichés and it’s going to use every single one it can without attempting a single original concept if it can possibly manage it.

As our story continues, Gran (yes, you will be constantly looking around for an old lady whenever someone addresses him by name) seeks to see the amazing things that his father's letters have told him about in the world, from islands of fire to amazing Astral beings. Thus, when Lyria lands metaphorically in his lap he's finally given the opportunity to go and seek these out in the name of helping her alongside his pet Vryn and knight Katalina. Fortunately his rather pathetic attempts at swordplay won't be the deciding factor in their fight, as Lyria can summon ancient beings such as the colossal dragon Bahamut to aid them in their quest to find the truth of her origins and avoid the clutches of the empire.

You can tell that Granblue Fantasy has its heart in the right place and it clearly wants to position itself in the role of a classic adventure series for the 8-14 or so age range. For audiences of that age the show could well work in fairness - it has a bunch of distinct characters, cool dragons and it’s not overly violent, dark or complex. For everyone else though it's not so much a story to follow as it is a case of "spot what this plot element has been copied from", as even taking into account that most things have been done somewhere the show doesn't even make much of an attempt to disguise what it's doing. It's not helped by the fact that everything is just so bland elsewhere. Gran and Lyria and essentially stock characters whose personalities and character traits you could recite from memory and... flying thing Vryn, whatever he's supposed to be, comes from the Pretty Cure school of animal sidekicks you want to murder for being so annoying. Katalina is thus far the sole point of interest in the show, but to be honest I suspect this is more because she's been mostly pushed to the side thus far rather than due to any good writing.

On the other hand the visuals of the series are really good here - the visual style of the show is frankly amazing for the most part and really makes the show pop even in its dialogue-heavy scenes. Bar Vryn (whom the production team have barely even bothered to animate), all the character designs are pretty nice too, though again not all that original.

There’s not too much more to be said about the series at the moment because, well, there isn’t any more yet hence this being a review of only the first two episodes. This is because the production has hit a few delays and shunted the series to the spring season although they decided to try and drum up some advance publicity for the show. As it would happen this may not work out too well for them given how dull and mediocre this opening salvo for the series is. If you have some young family members who could sit through the subtitles then this would be a great anime starter show for them, but apart from that it seems like you won’t find anything worth your time here when the spring season rolls around.

You can watch Granblue Fantasy the Animation in streaming form on Crunchyroll.

4
You likely won't be eagerly awaiting more of this come spring...