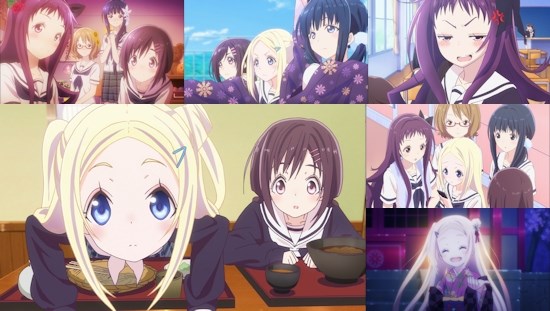 You know, in the name of increasing the efficiency of UK Anime's writing staff, it's about time we put together a synopsis template for slice-of-life series that can be easily deployed whenever required. As there's no time like the present, let's get this committed to the site right here and now:

"Character x is an ordinary school girl who wishes that she could be cooler/different/more popular (delete as applicable). This seems like an unattainable dream until she meets Character y, who slowly but surely convinces her to join the Insert after-school club name here.

However, there are tough times ahead as the two girls try to scrounge together enough members to become an official club and find themselves both a teaching supervisor and a base of operations. Even as the club grows, there are both laughter and tears to be had as the group prepare for the Insert festival name here."

Set against this (admittedly slightly unfair) template, Hanayamata is another generic slice of life series - the club and interest in question is Yosakoi dancing; our protagonist is Naru Sekiya, a quiet girl who looks up to her outgoing and seemingly endlessly talented best friend Yaya; and our catalyst for change is blonde-haired American transfer student Hana, whose love for Yosakoi dancing knows no bounds.

Enchanted by Hana, having seen her dance and mistaken her for some kind of fairy about to whisk her away to a better life, Naru is more than a little embarrassed to find that this girl is actually her new classmate, and only becomes more mortified as Hana proceeds to harass her at every turn to join her newly-formed Yosakoi club. Eventually, circumstances see Hana relent, which is where we enter the "find more club members" segment of the show, followed by the "prepare for a festival" segment which powers the show through to its finale.

Its over-arching story is a by the numbers affair then, but we do have to give credit to Madhouse for at least taking that generic template and crafting a visually appealing and broadly enjoyable little series from it. The shows aesthetic doesn't always work in its favour (the eyes of the character's designs all look odd to me, for starters), but when it clicks it's absolutely beautiful. The clear highlights here and when it comes to the actual Yosakoi dancing itself - the opening credits set the scenes for these brief flashes of fluid movement, and the final episode which uses the same wonderfully catchy song raises that bar with its dance set against fireworks, festival surroundings and an absolute riot of colour. That colourful vibe extends through the rest of the show, and certainly does a great job of selling you on its setting when coupled with an exuberant voice cast.

Hanayamata also proves to be a well-paced series - even though it takes a lot of its running time simply assembling its club members it never drags, and even watching it in large chunks never became tiresome, with each episode holding just enough comedy, drama and change to remain interesting. By the end of it all we felt pretty satisfied with what we'd seen, with a sweet ending to a pleasant series that did exactly what you might expect of a show of this nature - entertain without creating any particularly lasting memories of what it brought to the table.

The only real weakness to its concoction is the way it stirs up its drama, either between main characters or in their immediate friends and families - these occurrences often feel forced and rushed into play to ensure the series has a continuing story to tell, and the quick resolution to many of these incidents doesn't really help to dispel this theory. Admittedly none of these moments descend outright into the unbelievable, but they do threaten to elicit a "here we go again reaction" when a character suddenly retreats into their shell as the others try to fathom what's wrong with them.

There's only really one thing you can ask of from a series such as this, and it's for the show to be fun. In those terms, Hanayamata delivers nicely - it isn't laugh out loud hilarious and only occasionally succeeds in actually being funny, but the journey undertaken by its main character is an enjoyable one and its cast are interesting enough to make its drama and emotion stick to some degree even when it feels a little shoe-horned into proceedings. If you aren't a fan of the genre then Hanayamata won't change your mind about the merits - or lack thereof - of slice of life anime, but if you've been aching for a new series to fill that particular void then Hanayamata is a sweet and satisfying way to satiate you.

You can currently watch HaNaYaMaTa in streaming form on Crunchyroll.

7
It doesn't break any new ground, but Hanayamata is simple, effective and fun, offering a fair dose of everything you might look for from the style of anime it represents.
LATEST REVIEWS