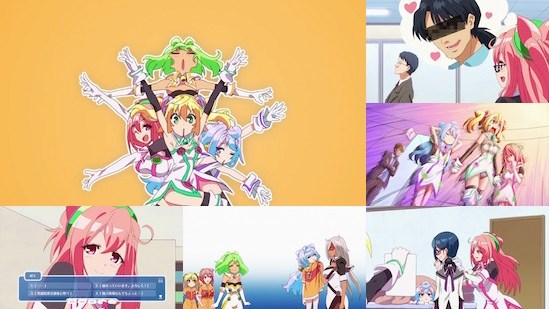 You have to admire Japan’s ability to anthropomorphise just about anything. And if something like Kantai Collection can turn naval ships is a multi-million moe girl money-spinner, then perhaps anything is fair game. Now it’s the turn of mobile apps with Hackadoll the Animation, a series based on the news app of the same name. Created by the company DeNA, this (currently) Japanese-only app aimed at otaku tailors its collated news feed to the user’s preferences based on the information they’ve shown interest in. The app even features a trio of moe mascots, who also happen to be the stars of this show.

As the surprisingly coherent English-spoken introduction to the series states, in the year 2XXX mankind has reached an age where the amount of information available to them in so vast that it’s extremely difficult to find what individuals are looking for. To combat this, a navigator program known as “Hacka Doll” has been created. The series follows the exploits of three personal entertainment AIs (named 1, 2 and 3) as they journey across the Earth in order to help advance humanity. The problem is that none of them are very good at their jobs, much to the dismay of their leader - Hacka Doll #0.

The Hacka Doll’s inability to do their jobs properly is pretty much everything the series looks to offer in terms of story, and with each episode clocking in at around seven minutes long there isn’t a whole lot of time for them to adventure outside of that. Each episode presents a new scenario where the Hacka Dolls arrive to help “advance” a potentially unwilling victory, before causing havoc one way or another. It isn’t the kind of show that one would get actively invested in, but could easily dip into now and again every so often for a few quick laughs. As such Hackadoll the Animation strikes the strange balance of not feeling like a waste of time despite not really leaving much of a lasting impression.

Based on an otaku-centric app as it is, you can also bet that there are plenty of anime and manga references on offer here. Spotted amongst these episodes were nods to the likes of KanColle, Puella Magi Madoka Magica and Neon Genesis Evangelion - some of which are more blatant than others. Other otaku interests are also lampooned as the fourth episode takes the format of a dating sim game complete with various choices for the character-of-the-week to take. It’s nowhere near as funny as when Excel Saga did it way back in 1999, but hilarity still manages to ensure nonetheless.

However the series is very well animated, which comes as no surprise as lead studio Creators in Pack are collaborating with none other than Studio Trigger on this project. The futuristic clothing styles of the Hacka Dolls may be another element that isn’t particularly unique to the series (the girls wouldn't look out of place among the various Vocaloid characters), but all three sport reasonably recognisable designs that are completely distinguishable from each other. The animation is smooth and the colours nice and vibrant, suggesting no expense or effort has been spared despite this only being a series of shorts. For existing Trigger fans there’s also some enjoyment to be had in the voice cast. Hacka Dolls #1 and #3 (voiced by Miyu Takagi and Nanami Yamashita) were both previously heard in When Supernatural Battles Become Commonplace, Hacka Doll #4 voice Reina Ueda appeared as Jasminka in Little Witch Academia: The Enchanted Parade and Ryōka Yuzuki is right at home as the authoritative #0 - having previously played a similar position as Satsuki in Kill la Kill.

Hackadoll the Animation is no must-see series by any stretch of the imagination. These first five episodes haven’t given any indication of a potential to expand beyond its already displayed repertoire, the jokes are the kind of humour that has been similarly attempted elsewhere. But when those jokes are still relatively funny and the show looks as good as it does, maybe that isn’t all such a bad thing. If you’re still looking for a “cute girls do silly things” series to fill your quota for this season, Hackadoll isn’t necessarily the worst place to look.

You can currently watch Hackadoll the Animation in streaming form on Crunchyroll or DAISUKI.

6
Collating the best of otaku humour into one show without really offering anything new - just like the app itself.