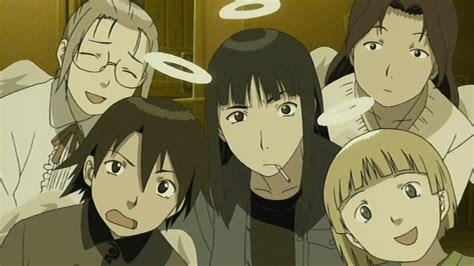 There’s only one way to start watching Haibane Renmei and that is to crank up the volume and luxuriate in Kou Ootani's opening music. Perhaps the best opening music in anime, and if nothing else the purely orchestral soundtrack is certainly one of the most evocative of its subject that I can think of in any form. The music fits the story fits the tone fits the characters.

Yes, you guessed it I am no stranger to Haibane Renmei. If you read my piece on this series and Angel Beats this will be of no surprise whatsoever. For me it goes back to the days when MVM released the series over four DVDs and being broke I had to carefully buy them, to the point where I could not even watch the series in full for months because I had parts 1, 2 and 4 but not 3 (if memory serves). Yes, such were the perils of the past. But here was yet another reason to reacquaint myself with a series which, in my mind, I have always summed up with the following phrase:

Haibane Renmei is a series that has the power to change people’s minds about anime.

I’ve felt that for well over a decade, closer on fifteen years or more and I still believe it.

Caveat: it's possible I may explain my statement. I may not. I’m mercurial you know.  Also, I just find it damn hard to explain.

Newly hatched haibane, Rakka, remembers dreams of falling. Named after her dream, she lives with other haibane in crumbling Old Home, in the walled city of Glie that none can leave save the travelling Toga and the birds. Like the other haibane, Rakka sprouts wings and is given a halo; rather angel-like albeit with useless wings.

Haibane Renmei stands and falls on its tone and the nuances of its characters. Luckily it is beautifully served by both right from the off and like the best series that delve into character, the deeper it goes the better it gets. No one is simply two-dimensional and usually a character’s surface presents both a genuine personality but also a set of carefully constructed facades; there is no single truth but each character eventually reflects all the complexities that people have in real life. One of the two eldest haibane, Reki, who becomes closest to Rakka as series protagonist, emphasises that she's disturbed, troubled but on occasion sentimental and is also (almost) a mature adult. Looking after the young feathers, (not quite so) angelic children who live in Old Home, Reki in the opening scene having found Rakka’s cocoon intentionally provokes the young feather’s curiosity at the cocoon that will birth Rakka, yet simultaneously berates them for not obeying her edicts to stay away. You can see her joy at the children’s mischievousness amidst her mock censoriousness. Yet as the series progresses, we learn this is just a single nuance of her character, joyfulness mingled with sadness and disturbing truths that lead to a form of redemption; sin, redemption, forgiveness and acceptance are big in Haibane Renmei.

That last sentence sums up much of the series structure which organically morphs between conflicting emotions, mostly seen and felt through Rakka’s eyes.  The series gently introduces us to the world of Glie, as Rakka shadows her fellow haibane as they go about their everyday work in a gentle flow of life into which tragedy is allowed to slowly creep, changing the tone of the series from what could easily have become whimsical to something much deeper, sometimes dark but never depressing. In this the tone reminds me at times of the fleeting beauty of life as seen in the novels of Banana Yoshimoto, where fleetingness of joy and beauty heightens the emotion it provokes, promotes it and should be cherished while accepted that it can never quite last. 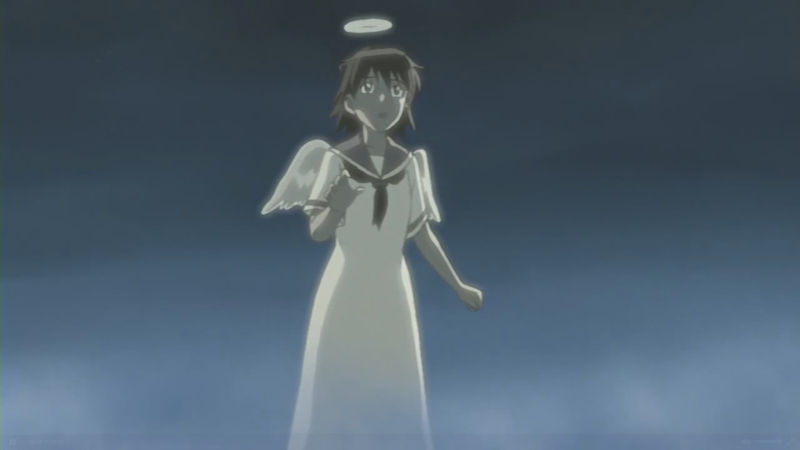 All of us have the right to feel lost

As the tone changes so the world building expands and though only a 13-episode series, Haibane Renmei creates a beautifully realised world, one with rules and, like the protagonists, nuances.

Some of this is surface, how the haibane are expected to work but are not paid, living instead with a form of barter where they work for goods, not money. They can only wear second-hand clothes and they rarely own anything; but again, even this surface is actually deeper because it demonstrates that the haibane are in a transitory state, something that is integral to the story that unfolds. Everything about the world of Haibane Renmei, including those that look after the haibane, whether the titular, near-mystical Haibane Renmei or the human population of Glie, who seem to lovingly care for them, feel like they exist, have existed, and will continue to exist after the story is told, and for this much credit belongs to Yoshitoshi ABe.

The series is based on ABe’s manga and he is also credited for the series structure and screenplays, making it feel like a very singular vision. Of course, it is also a singular vision that sits amongst two other series ABe contributed to as character designer: Serial Experiments Lain and Texhnolyze (and yes I know I am in the minority of thinking that latter series is superb, as is evident here), both of which like Haibane Renmei are filled with a nebulous ambiguity and are not always an easy watch, willing to pull your emotions about as taut as they can go, but always in a way that is not melodramatic. This matters because Haibane Renmei makes you care about its characters, and allows thems to resonate with the viewer. True, they may not individually make people’s top ten, but as an ensemble they're unforgettable. Young yet wiser than her years Kuu; sleepy, reasonable Nemu; tomboy Kana; well-meaning occasionally mischievous Hikari and a catalogue of others, whether the man who runs the second-hand shop or the gruff clock tower worker or Nemu’s pregnant co-worker, each character is far more "real" in this series than my poor brief descriptions allow. And that’s the beauty of the series, the connections between various individuals take form like an intertwining, weaving tapestry. Not surprising then that it can take a single event to upset it so... [redacted for spoilers]

I also love the ambiguities that exist in the series, which provoke the feeling that there are pieces of it you can never quite get straight (again like Lain and Texhnolyze), but like the films of David Lynch there is a real sense of intelligence behind it. This ethereal nature keeps you coming back, and as I rewatch the series I remember things I have forgotten and reconstruct the narrative based on where I am in life (the old chestnut that nothing is ever the same, as we the viewer have changed since last we watched it, etc.). It’s the old Hamlet syndrome: is he a madman or a cold, calculating git? The fact you can read aspects of the series in so many ways means that you can personalise and internalise it. There is power in giving only so many answers and then allowing the viewer to create their own rationale for the meaning of a thing. That is what art does, it provokes, it suggests, it does not allow for a simple, single meaning, even if some things are clearly described and defined. It's also a testament again to the world building because it is that sense of there being so much more going on and we are allowed to see some things in detail, while others are only ever hinted at or seen in glimpses.

Or maybe that’s just me?

Haibane Renmei reminds me of series like Mushi-shi in how they seem to be much loved by those that watch them and yet often seem overlooked. Their singularity of tone and also their design make them curiously accessible to an audience who might otherwise avoid anime because of the tropes they face (ironically folk don’t seem fazed by this if instead you slap someone in a suit and sell it as a Marvel movie).

It would be criminal not to again mention ABe, as ABe's designs are quite beautiful and indeed the series is definitely one of the most well-realised I can think of. Often it's in the simple things, as opposed to say the exuberance of some series by TRIGGER or the uniqueness of SHAFT (not that I am knocking either). Where Haibane Renmei shines is in the characters and its world; visually every character feels distinct, there’s no genericism and yet this seems achieved through thoughtfulness not exaggeratedness, something you think must be very hard to do. Equally, the vision of the world feels solid, real, and all of a piece, recognisable and yet alien: after all, the city of Glie is walled so no one can get in or out; the wall is dangerous.

Yet for the beauty of the design, it’s not unfair to say that even for the time the series was released in 2002, the animation by Radix was never quite top tier. As such it can mean that the move from DVD to blu-ray isn’t as essential as it may be for other series. For me, it means clearing some much-needed shelf space and less disc changing - the visual clarity of the subtitles is always a plus but whereas some series will be given a new lease of life, Haibane Renmei’s beauty was always in design and writing, neither of which benefit much from a Blu Ray makeover. Of course if you're picking this up for the first time, Blu Ray is the format to go for.

But really, stop reading this and instead slip in that disc, crank up the volume to listen to that score but stay for the beauty that is Haibane Renmei.

Review copy courtesy of MVM though yes, I also pre-ordered my copy. Some series are worth paying for (again).

10
A masterpiece of design, character and humanity. An overlooked classic.
LATEST REVIEWS