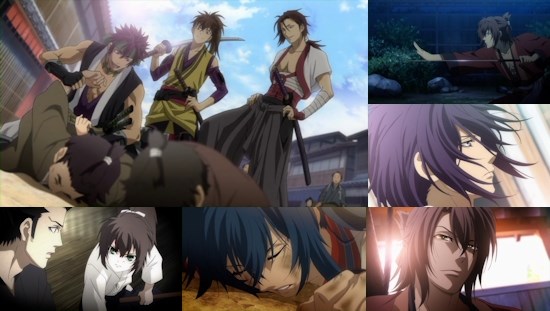 Having more or less neatly wrapped up its story with a bow atop it by the end of its second season, Hakuoki's third series instead drops back into the past (well, the past of the past given the historical context of this show) to grant us a prequel set in the days before the cast of characters we came to know over the first few seasons gained the Shinsengumi name.

With no sign of Chizuru at this early stage in proceedings, our protagonist for Dawn of the Shinsengumi is a young man named Ibuki Ryunousuke - discovered starving and injured, he finds himself taken into the care of a man named Serizawa... although "care" might not be the right word, as Serizawa both refers to and treats Ibuki as his dog. Serizawa's position is that of the commander of a group known as the Roshigumi, and aided by right-hand man Hijikata this outfit look to make a name for themselves having recently moved to Kyoto.

While Serizama might have some financial and political cloud, his lack of manners and short temper threaten to short circuit the Roshigumi's rise to power at every turn as their reputation amongst the populace proves to be anything but positive, leading to them being labelled the "Wolves of Mibu" thanks to the uncouth behaviour of some of their number. It's a reputation which Hijikata amongst others is determined to repair, but with the supernatural elements we're already aware of amongst other issues coming to the fore, the rise of the group to claim the much vaunted name "Shinsengumi" is anything but a simple one.

Perhaps the most refreshing part of Dawn of the Shinsengumi is its lead character, even if he is often relegated to little more than a role as an incidental character in many of the major elements of the series. While Chizuru tended to be a quietly obedient character - in Hakuoki's early running at least - Ibuki is no shrinking violet, proving to be a frank, straight-talking lad who cares not for the position or strength of those he's delivering uncomfortable home truths or insults to. Although he rarely follows through on these moments with actions, it does add a certain something which Hakuoki has perhaps previously been lacking, swapping its romance elements for a scenario where most of the main cast aren't afraid to voice their opinions.

Beyond this, there isn't anything particularly noteworthy about this series of Hakuoki - acting as a prequel as it does, you know how its story is ultimately going to pan out, and none of the elements of the franchise's back story or character histories that it explores could really be considered vital. Even the show's supernatural elements (which are arguably already under-utilised by the franchise) don't really have anything hugely important added to them in terms of explaining their origin, which could be seen as a missed opportunity.

Then again, the true purpose of this third series appears to be a more character-centric one, created to offer some more insight into - and time spent with - the various male characters who are an important part of the story to follow. With that in mind, if you're in love with any or all of the characters (be that proverbially or literally), then there's probably more than enough to keep you satisfied here, all set against the same semi-accurate historical context of the rest of the story to benefit those with a handle on 1860s-era Japanese history.

Visually, this series is on a par with previous iterations of Hakuoki - not mind-bendingly gorgeous or action-packed but capable of doing everything required of it without issue, even if some ill-advised attempts to stylise a small handful scenes with the addition of film grain and dirt create some pointless distractions on occasion. Having improved somewhat for its second series, the English dub for Dawn of the Shinsengumi is still better than the first series but feels like a step backwards as its voice cast sound too often like they're going through the motions. Add some strange language choices in both English dub and subtitles - did anyone talk about being pissed off or "partying" in 1860s Japan? - and you have some other elements that may break your immersion.

If you've enjoyed the first two series of Hakuoki however, and want to spend more time with its cast (Chizuru excluded) this is certainly a proficient way to do so. It doesn't add a whole lot to the franchise's world or story if you've been watching with a casual eye up until now, but more dedicated fans won't have too look too hard to find areas of this third season to enjoy and will doubtless welcome watching the rise of the core cast to prominence as a result. If nothing else, this Hakuoki anime adaptation seems to know what its fans want and how to deliver it.

English and Japanese stereo audio with English subtitles.  Extras consist of textless opening and ending credits, and trailers for other titles.

6
This prequel to the show's main story doesn't offer a lot of new insight into its world, but does offer some background and the opportunity to spend more time with its cast, which should keep fans of the franchise happy.
LATEST REVIEWS