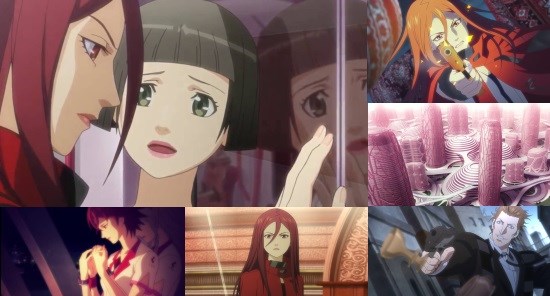 The Project Itoh trilogy has had a bit of a rough beginning. First a bankrupt studio caused the planned first film, Genocidal Organ, to be pushed back (and is only now apparently getting back on track) and then the first film to be released, Empire of Corpses, turned out to be dead on arrival. Now Harmony has arrived in the UK from Studio 4°C via Anime Limited, and fresh from its recent screening at Scotland Loves Anime.

In the future, a new world order designed to preserve life has taken hold of almost all aspects of life by linking the populace into a shared computer network that not only allows them to monitor said population, but also to see through their eyes and provide the ultimate in augmented reality from pop-ups to tell them when they’re doing something that’s not good for them to full VR chat rooms. Deviation from the norm is unacceptable and those who do, like Tuan Kirie and her friends, find themselves booked in for extensive rehabilitation as they find out after a botched suicide attempt. Years later Tuan finds herself working for the Administration as a Helix inspector for the World Health Organisation (well, they practically had an army in Inferno, maybe this is where things are going) who is supposed to monitor conflict zones, though she prefers to spend her time on the edge of the law by trading for illegal alcohol. After being sent home to Japan for some enforced holiday however she becomes embroiled in a truly horrific event which, she discovers, may have terrible repercussions all the way through to her friends and family.

Narratively, Harmony is actually a pretty strong film, with a carefully laid-out plot that makes good use of most of its thought-provoking concepts. In fact it’s good enough that the majority of it could be lifted out and with a few character swaps, would feel at home in something like Ghost in the Shell or Psycho-Pass, which is high praise indeed. Once the story fully kicks off in a sequence that works so well cold that I’d never dream of spoiling it for you, Tuan’s investigation into what’s causing a terrible series of events combined with her own jaded views of the system in which she must work are really interesting, and the build up to exactly what’s going on is done well. This makes it all the more disappointing that the ending just can’t live up to what’s gone before, feeling like a bit of a cop-out arising from the need to get out of the corner the writers had driven themselves into.

It has to be said as well that the direction of the film isn’t great, and the pacing does feel somewhat erratic. It’s clear that neither of its two directors had a particularly solid idea of how they wanted the film to flow or feel, and the result is a little jarring with the film needing just a little more life and inventiveness to make it really sing.

Visually though, it has to be said that the film does look great. The character designs are really solid and the detail in the film is impressive, particularly in the backgrounds whether you’re looking at the strange, veined and phallic buildings of Harmony’s future Japan or the elaborately styled castle-like city of Bucharest. The CG is excellent as well, with particular notice going to the brilliant virtual chat rooms which feature great statuesque versions of characters with brilliant little touches like the occasional pixilation or jarring as they interact and project themselves. It’s a great look that I could see being ‘borrowed’ by other productions down the line.

Sound wise the score is pretty good, although at the same time it’s not particularly memorable either - a shame, as something stronger could have really helped make up for some of the pacing issues. Both the Japanese and English dubs are present here and both are okay. The film's structure, characters and pacing don’t really allow for anyone to go all out with a particularly powerful performance, though the Japanese cast do manage to do a slightly better job overall largely due to Jamie Machi’s performance as the English voice of Tuan being particularly flat.

Overall then, Harmony is a solid film that just about delivers. It certainly has some flaws but most of them are cancelled out by all the areas that the film does really well in - the sequence I can’t tell you about is staggering and disturbing in the best way and easily one of the most memorable things you’ll see this year, for example. If you’re looking to while away a quiet evening with a thoughtful sci-fi drama you could certainly do worse than popping in a copy of Harmony.

English and Japanese 5.1 audio with English subtitles. Extras consist of interviews with the US cast and trailers

7
A thought-provoking film that almost pulls it off.