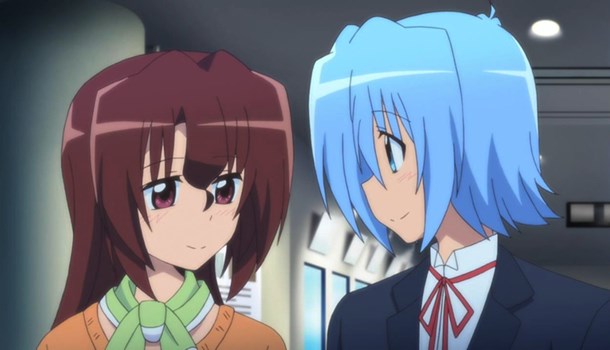 Hayate the Combat Butler seems to set itself up for failure almost as soon as it starts. In the very first introductory segment the main character tells us (in a way that leaves the fourth wall broken and crying) that this new series has been especially written for both existing fans of the franchise and for complete newbies. Trying to satisfy both audiences, as well as freaks in the middle like me who only watched four episodes of the first series, seems like a rather big ask - can the show pull it off?

The show follows the adventures of the titular Hayate Ayasaki, who is the butler for the ludicrously rich Sanzenin family and in particular the heiress of the family, Nagi. Nagi is your young female blonde twin-tailed overly-intelligent tsundere otaku insert character for this show, so those of you with bingo cards can tick those few boxes off as a starter. Being obscenely rich, Nagi tends to get kidnapped so she can be ransomed off for money, and it’s up to Hayate to dissuade people from doing so, usually with force. Hence the whole “combat butler” thing. This new series has an additional twist as at the end of the first episode a small girl appears who proclaims herself to be Nagi’s younger sister, much to her disbelief. The purported little sister refuses to budge, and continues to try and prove herself while very overtly ransacking the mansion for a hidden plot macguffin.

Trying to talk about the episode storylines in Hayate feels like an exercise in trying to avoid sounding like a madman. Things start out in one place, get turned around, something dumb happens, and at the end of the episode some form of resolution is reached that has little to do with the outset. The show is much like a curious infant, wandering off in one direction or another even when you are paying close attention to it.  Probably the most destructive instance of this is right at the start of the first episode, a flash forward that is then utterly dropped in pursuit of more routine plotlines and tomfoolery. The fact that the show still flows well from one point to another and delivering laughs without coming off the rails is a definite feather in its cap. Perhaps the most “normal” and to me the most enjoyable episode so far was the third instalment, which takes the form of a rather mundane misunderstanding-based romantic comedy, although with a sharper edge than normal. The way this episode plays out is utterly by-the-numbers, but provides enough comedy and time with the characters to make it come to life.

The one constant is the characters, who thankfully you can easily keep track of. Sort of. While the first episode is a very good introduction to the main cast and their interactions, things get confusing quickly as secondary characters start showing up with zero fanfare and commentary on what is going on. While they are usually involved in gags that do not require you to have any form of background knowledge about them, it still gives you this nagging feeling that if you knew who the three or so random people standing in frame were you would be laughing a lot harder. For veterans of the show, everything will click into place nicely, and leave you wondering what I’m complaining about in this paragraph. All that being said, the show does have more than enough good jokes in it to keep you entertained along the way, and even when it misses it doesn't bring it down.

Something else that doesn’t make a lot of sense in the series are the times that it shoe-horns in over-wrought dramatic scenes in a wretched attempt at foreshadowing. A comedy series suddenly growing a deadly serious plotline is already a tedious trope, so watching a show where it keeps dangling this in front of you from the get-go is just exhausting. It doesn't help that these scenes are poorly written and without fail kill all the momentum in an episode stone cold dead.

Hayate has some really bizarre art choices that, to give it credit, it sticks to its guns on. The show makes frequent use of ropey CG, both for benign uses and to more some more aggressively off-putting ends. In the case of the latter, the Sanzenin manor backgrounds are made in CG in an aim to make them look astoundingly opulent; however this just comes off as astoundingly absurd.  Also absurd are the character designs, where everyone has a colossal head with their features relegated to a small corner while their hair reigns supreme. This admittedly may be a stylistic choice but it makes the cast designs look bizarre. The art often has moments where the cast slip off-model and look like they are in need of an injection of TLC (or Botox perhaps? -Ed), and the few action scenes present in the show often feel like the staff are cutting corners to animate it. Still, it doesn't get in the way of the humour, so can be forgiven.

Hayate the Combat Butler is a strange mess of a show. It’s entertaining to watch and certainly has its share of laughs along the way, but the way it switches focus gets tiresome quickly. The shows attempt to satisfy both new and old viewers alike is admirable, and to a limited degree works, but at the same time I can't help but feel it would have been better served by just making one or two recap episodes instead of sprinkling the catch-up information throughout the season and drawing the process out. Veterans of the series may be able to glean a lot more from the show, and more power to them.

You can currently watch Hayate The Combat Butler: Can't Take My Eyes Off You in streaming form right here at UK Anime Network!

6
A messy glob of comedy that just about manages to hold itself together to deliver laughs.
LATEST REVIEWS