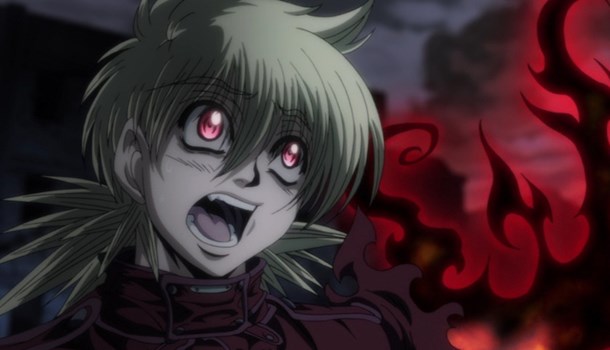 Back in the day, the original Hellsing anime was seen as a fairly entertaining horror anime with interesting characters and a different take on the vampire genre as a whole. What fans didn’t enjoy about the anime adaption of Hellsing was it's total disregard for the manga. While characters and organisations were kept, the setting and even focus of the story ended up being something completely new. 7 years on from the TV series’ original release and we have a new OVA of the Hellsing saga. Question is, will this be what the fans want?

Hellsing starts with how the current head of the Hellsing Organisation, Sir Integral Fairbrook Wingates Hellsing, brings about the resurrection of the feared "No-Life King" better known as the vampire Alucard. From here we watch as Alucard, now the trump card of the Hellsing Organisation, partakes in a mission of vampire and ghoul eradication in an English town, whilst simultaneously introducing us to our female lead, Seras Victoria.

Hellsing Ultimate does indeed stay true to the original manga, and many fans will thank it for that. Everything from character design, settings, plot, characters and even gore has been lifted straight from the bloody pages of the manga it came from. Alucard and the insane Catholic Priest Anderson look even more evil with their wide toothy grins and love of battle. The first volume is an epic fight between the two.

So existing fans will be happy, but what about the rest of us who have never seen the world of Hellsing before? Well, it's not family viewing. This anime deserves its 18 rating more than anything else that has come before it. In fact, that is the major off-putting factor for this anime; it’s extreme violence.

While understandable for this genre that violence and horror go hand in hand, there are times where, even for a vampire flick, this borders on the snuff genre. Think of the grotesque scenes portrayed in films such as Saw and Hostel and you can see scenes with eyes being poked through, heads being used as playthings and enough fresh blood to keep the NHS in business for a decade. Thankfully for the most part the anime keeps it's excesses mercifully brief, but when the gore does arrive, it's enough to give the Daily Mail a field day.

The first volume seems to suffer from some very inconsistent animation in both the 2D and 3D department. While some scenes are a study in blood and wholesale death, they do occasionally suffer from either weak animation or horribly implemented CG. Other times the CG is gracefully melded with the animation and it becomes hard to tell traditional from computer generated, but the inconsistancy is still a bit jarring. While it is an issue for the first volume, the second volume (which has now been separated from volume 1) seems to have sorted much of the animation inconsistencies and brings it back up to an acceptable level.

While these might seem as major downers for the OVA, the characters, settings and situations actually help to relieve most of the issues that Hellsing displays. Characters are not depicted as overly good and with the help of Seras Victoria, a good amount of humour is injected into what could have been an overly serious anime. Again, keeping to the styles of the manga has helped, giving an unusual look to the characters.

The violence level in Hellsing Ultimate will probably be the major deciding factor here, not to mention the 1 episode per disc format. Considering that each episode is 50 minutes long and features a wealth of extras, the price becomes easier to swallow. If you’ve decided that uber violence and above average price is easy to overlook, then a wealth of interesting characters and a plot that is more entertaining than your usual vampire horror scenario awaits you.

A large array of extras for these single episode volumes. Both volumes are presented in 5.1 English and Japanese soundtracks, for those with the equipment to enjoy it.

7
Not for everyone, but an interesting plot and characters make this one to try at least once.
LATEST REVIEWS