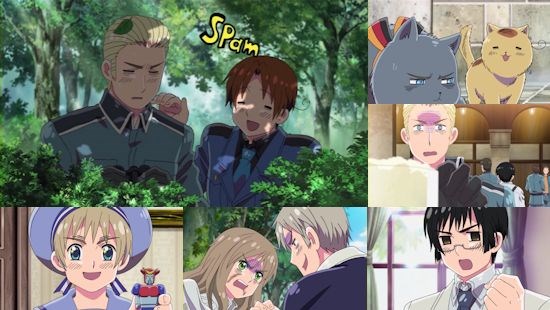 If your still hungry for your fill of Hetalia, then the franchise's success shows no signs of abating in the west - with the manga now in print once again, a fifth season of the anime confirmed for a Japanese release next year, and the anime continuing to enjoy a UK release courtesy of Manga Entertainment.

This brings us to this fourth animated season, or the second half of Hetalia: World Series, and it probably goes without saying that nothing has changes in this batch of twenty-eight brief episodes (including the four bonus instalments bundled in here) as they continue to spray forth unceasingly brief vignettes of comedy centred around its anthropomorphism of various nations and countries as (predominantly male) living, breathing individuals with personality quirks that tend to tie into stereotypes of said nations.

On the part of the Japanese language side of the equation, most of the prodding and merry-making at the expense of nations from Sealand to Sweden tends to be pretty mild and light-hearted, sprinkled in with actual historical facts and cultural talking points that make for some interesting little factual moments that unfortunately tend to get lost in the show's construct as a whole.  Indeed, it's sometimes hard to discern the fact from the fiction to the point where you feel like you've actually learned anything much, although any reason to call watching anime "educational" is always most welcome.

As per previous volumes of the series however, FUNimation Entertainment's English dub has a nastier, more vicious streak to its comedy - while some elements get a literal adaptation from Japanese to English, it seems that the writers can't resist peppering episodes with swearing and slurs.  Throwing in a little homophobia here and a little casual racism there make the series funnier?  No, it really doesn't, and although some of the English dialogue is undoubtedly funnier than the typical inoffensively bland delivery of the original, it's offset by those moments that make you cringe, or worse shout at the screen "did you really just say that?" - something I did a few times, and I'm hardly the reincarnation of Mary Whitehouse.  This isn't particularly helped by the terrible accents deployed throughout the English dub - sometimes this is clearly deliberate, while at others you can't help but get the feeling that they are just straight-up bad.  If you've ever heard a worse Scottish accent than the one attempted in an episode of this series, I'd love to hear about it!

The only place where this season of Hetalia really stands out is its introduction of a new "Nekotalia" segment.  It still isn't all that funny, but it reimagines the main cast of characters as cats - and as we all know, cats make everything better.

If you're an existing fan of Hetalia, there's certainly enough of a feeling of "more of the same" to keep you amused and entertained here, although I do have a sneaking suspicion that its sense of humour has become less original or sharp by the series.  If such classic jokes such as "Germans love beer" and "English food is bad" are your cup of tea, then you'll be veritably drowned in the stuff.  Personally, my pateicne with this line of humour ran out by the end of Hetalia: Axis Powers, leaving World Series to feel like a tired trudge over ground that's so well-worn you fear falling right into the Earth's core at any moment.

Where Hetalia continues to be utterly unrivalled is in its selection of extras - don't be fooled by the fact that it takes up a single DVD, much like previous series this fourth season of the show is absolutely packed with commentaries, pointers at the show's real history, footage from fan events, interviews, songs and more.  I'm sure I've said this before about previous volumes, but if only every anime release could be this comprehensive.

To put it bluntly then, fans of all things Hetalia have been wonderfully served by this latest addition to the series on DVD, but newcomers might want to start from the beginning and arguably the show's strongest material to get a feel for whether it's a show that they can enjoy - what's more, it's well worth splitting your time between watching the English and Japanese language versions of the series to get a feel for both, as rarely in modern times has an English reversioning been so different from its original counterpart.

5
A choice between a staid and dull Japanese script and an over-the-top English one aren't exact great choices, but long-term Hetalia fans will find more to enjoy here and there are at least some occasional bright moments to be found.
LATEST REVIEWS