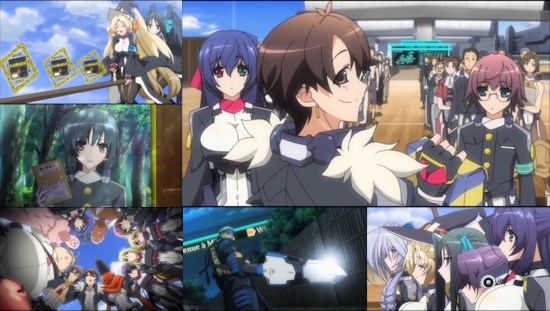 Horizon on the Middle of Nowhere - Complete Season 1

One of the hot topics for anime fans in the UK this year so far has been: "Exactly what should we call this series?" Is it Horizon on the Middle of Nowhere or Horizon in the Middle of Nowhere? While Manga Entertainment have staked their claim in the "on" camp, we're increasingly convinced that actually the original Japanese title's use of "in" is correct - after all, Horizon is a character within the series, ergo she would be "in" the middle of nowhere, surely?

In a way, this confusion over the show's proper title acts as a perfect accompaniment to the series itself - try to take in everything that Horizon on the Middle of Nowhere's narrative tries to foist upon you and you're going to be left confused and entirely unsure of what makes sense any more. However, let us try to pick out at least the core of the story for you here.

In the far-flung future, much of humanity finds itself largely confined to living in huge floating craft that contain entire towns and cities. The year is 1648 - only it isn't actually 1648, but rather where the clock currently rests as mankind seeks to use the details within records known as the Testament to recreate history from beginning to end in as accurate a fashion as possible so that... you know what, we really have no good idea why they're reliving history, so let's just accept it and move on, shall we?

Our specific focus in this time and place is the Musashi Ariadust Academy - home to myriad individuals with a wide range of very unique abilities which the opening episode wastes little time in demonstrating as this group of students seek to strut their stuff in a training battle against their teacher. Amongst this number is Tori Aoi, our protagonist and an unashamed pervert who revels in his love of the female form, and more specifically the female bosom.

However, Tori isn't a completely heartless letch - he's also fallen in love with a girl. The trouble is, said girl died in an accident ten years earlier, but perhaps her soul lives on elsewhere? Once it turns out that this in fact the case, the existence of Horizon (for that is her name) is a revelation that looks set to shatter the alliances that various factions of humanity have built up, as this titular individual becomes a serious threat that some of those factions wants to see removed at any cost.

For all of the tangled elements of its plot, and the frequent dumps of exposition that occur in its early episodes, once you reach the second half of Horizon on the Middle of Nowhere's first season you can distil it very simply as a tale of "Save the girl, and potentially the world". It's this second half of the series that we can readily enthuse about, a gripping and action-packed roller coaster as the students of Musashi Ariadust Academy and the forces in their control face-off in an attempt to assist Tori in saving his beloved Horizon. This half of the series really demonstrates what the show does well - its animation quality is excellent, the show's large roster of characters (some of which have unfeasibly large... err... "rosters" of their own) are used to good effect thanks to their cornucopia of abilities and personalities, and the show balances its action, drama and comedy well for maximum entertainment value.

The real question here is whether you have the patience to wade through those early episodes, which still have a fair amount of character-driven fun as well as an action-centric opening episode to introduce a lot of its cast before descending into a sometimes torturous mapping out of the show's world, premise and politics. If you try to take it all in and try to comprehend it all you'll surely sink into an unintelligible mire, but if you can skim the surface of it all and tell yourself that none of it really matters then you'll find yourself having a far more enjoyable experience as a result.

Unfortunately we didn't get to check out the Blu-Ray release for this series as check discs weren't available, but as a word of warning we believe there to be video issues with part of episode seven on the Blu-Ray discs hitting retail in the UK (as there were with Sentai Filmworks' US release) which manifest themself as image aliasing and what appears to be a reduction in resolution for half of the episode. Thankfully, our DVD was free from this issue, and looked like a decent enough video transfer that gets no complaint from us. Audio is also strong, making the most of the show's diverse and occasionally thumping soundtrack and matching a strong Japanese voice cast with an equally enjoyable English dub.

Given how often we like to complain about, or at least mention, subtitle errors and ommisions in releases, let's give credit where it's due and point out that Horizon on the Middle of Nowhere has superb subtitles throughout - as well as some all-important translation notes to explain some of the wordplay and references made by the series, there's a wonderful attention to detail in the way that subtitles and on-screen text has been subtitled. If only all anime releases would follow this lead, we'd never have cause for complaint again.

Considering the sheer scope of the world it tries to build, it's a little hard to know what to make of Horizon on the Middle of Nowhere - if you're looking for a series with a rich, detailed sense of place and a complex, fully realised universe, then this series tries to deliver but ultimately fails on numerous counts and ends up as a confusing mess. Push past all of this however and you'll find a series that excels at providing a more simple level of entertainment, with strong characters and well-realised action as it strives towards a goal that transcends all of the politics and complexities inherent within the wider series.

7
The series flounders badly in its attempts to relay a complex world and narrative, but cut through this and there's some great action and strong characters to be found and enjoyed within.
LATEST REVIEWS