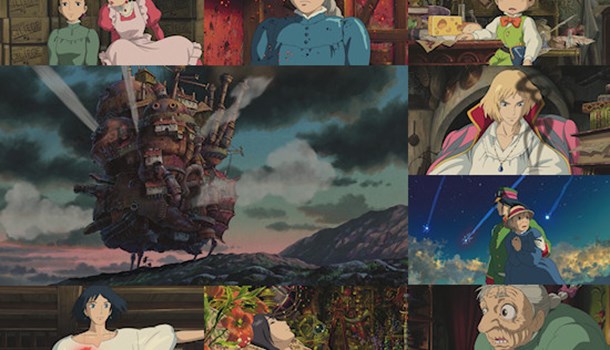 Given their place at the forefront of Japanese animation and the pure, unadulterated visual quality of their films, it's never been anything less than a pleasure and a thing of beauty to get our hands on the latest Blu-Ray re-releases of the studio's works.  Thankfully, the time for the UK release of the next batch of HD remasters is now upon us, and aside from Goro Miyazaki's directorial debut Tales of Earthsea we're also treated to 2004's loose translation of Diana Wynne Jones' novel Howl's Moving Castle, the film that would have been Mamoru Hosoda's debut at Ghibli had that particular "marriage" not all gone so horribly wrong.

With Hayao Miyazaki himself taking up the reigns in Hosoda's stead, Howl's Moving Castle wastes no time in introducing us to Sophie, a staid and plain young hat maker who seems to have no particularly notable redeeming qualities - at first glance, she seems a far cry from your average Studio Ghibli heroine.  Despite this however, a chance meeting with a mysterious and seemingly magical blonde-haired young man brings her to the attention of the so-called Witch of the Waste - a witch who, as her name suggests, isn't the kindliest of souls and has no compunction in turning Sophie into a frail, old woman.

While such a terrible turn of events would destroy most women, it actually has the opposite effect on Sophie. Freed of her self-conscious concerns about her looks and the expectations upon her but aware that she can no longer stay in her old home or job, she sets off on a journey which brings her into contact with the film's titular (and rather spectacular) moving castle and, of course, it's owner Howl, who just so happens to be more than a little familiar to Sophie.  Howl seems determined to put an end to the war and suffering raging across the film's fictional land, but to what dangerous extents as he ventured in order to meet this goal?  It appears that Sophie has thrown herself head-first into an adventure that will be more physically and emotionally draining than anything she could have previously imagined.

In comparison to many of Studio Ghibli's works, Howl's Moving Castle is a bit of a tricky one to evaluate. A detached evaluation of its plot and story reveals it to be an occasionally unsatisfactory affair - the main crux of its love story feels forced and nowhere near as well fleshed as other similar Ghibli works, and other elements feel disjointed as the plot staggers this way and that without any particularly strong threads to hold it all together.

Despite this, Howl's Moving Castle is still a satisfying viewing experience on a number of levels - its celebration of old age as a new beginning rather than a depressing end is a refreshing one, and the main cast of characters manage to be both likeable and vibrant enough to carry the film through its deficiencies in a blaze of humour and good-natured progression that will have you cheering them on rather than hoping for the worst.  When push comes to shove, the movie is ultimately entertaining, so although it might not stand up to intense scrutiny like other Ghibli films, as a fun couple of hours of viewing it works decidedly well, even if it might work better still were fifteen minutes or so shaved off its running time.

Of course, we can't go through a review of a Studio Ghibli movie, and particularly one released on Blu-Ray, without talking about its visuals, and in this field Howl's Moving Castle stands up in its own right as one of the studio's best - the film look absolutely sumptuous from beginning to end, and that gorgeous, typical Ghibli animation style is supplemented by beautiful visual effects, designs and backgrounds that are a feast for the eyes from beginning to end.  Needless to say the new, remastered Blu-Ray treatment of the film is perfect and really brings out the best in those stunning visuals to make it a must-buy for fans of the film, or perhaps even fans of beautiful animation in general.

From an audio point of view, this film's English dub isn't one of the best, sounding as it does rather cheesy quite a lot of the time, and even the Japanese language track has a bit of a struggle in casting a lead character who can sound both young and like a ninety year-old over the course of a single film - something which simply isn't possible, and makes the first portion of the film jarring until the reason for Sophie's odd voice.  Still, on a more general level the film sounds as good as it looks, so we have no complaints here.

As a whole, this is another triumphant Studio Ghibli Blu-Ray release - it absolutely looks the part, enough so to be worth considering purchasing as an upgrade if you're a fan of the film.  As a film itself, this isn't one of the studio's best, but it's still a solid piece of entertainment and a wonderful family film that is easy to fault largely because of the company it keeps.  At the end of the day, even a half-decent Studio Ghibli movie is still in the upper echelons of anime quality.

8
The film itself has some weak plot elements, but visually it's an absolutely stunning piece that makes full use of this new Blu-Ray transfer. A real feast for the eyes.
LATEST REVIEWS