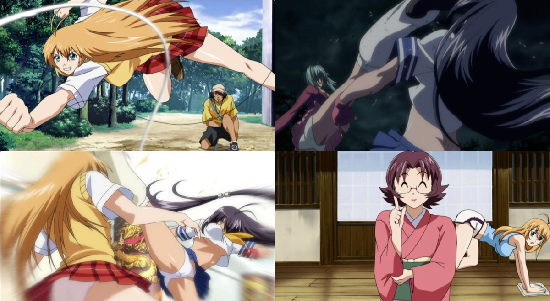 Great Guardians is the third season of the Ikki Tousen anime, following 2012's release of Ikki Tousen: Dragon Destiny. Three seasons is already an impressive feat for most anime, and Great Guardians is certainly part of something bigger as the original manga has been running continuously since 2000 and there is a subsequent fourth season, Xtreme Xecutor, not yet released in the UK. It's plain to see then that Ikki Tousen has struck upon a winning formula, but by this stage is it still wowing us with wild techniques or is it just lamely going through the motions?

For the past 1800 years the heroes and heroines of the Romance of the Three Kingdoms have replayed their tempestuous struggles in an ancient tale tale of viciousness and woe. Every generation, the spirits of these figures of history and titans of legend find new hosts - enhancing the strength and prowess of these hosts with their tremendous heroic superpowers... and also their tragic destinies, as they replay their lives - and deaths - over and over again. This crushing dharmic wheel has rolled on right to the present day, where the magatama earrings which contain the spirits have found their way to Japan... and just so happen to be mostly worn by buxom miniskirted schoolgirls! The Romance of the Three Kingdoms begins to unveil itself yet again in the form of brawling between school gangs... but this time there are a group of pupils who are determined to break free of the cycle and escape the destinies that have been written for them. Can they resist the weight of millenia, though, or the dragons that slumber in their hearts? Shimei Ryomu, one of the loyal (if long-suffering) lieutenants of the formidable but hopelessly ditzy Hakufu, leader of Nanyo Academy, is having her doubts. The schools are still reeling in the aftermath of the titantic battle of the Rakuyo High School, and Shimei is starting to feel her dragon stirring behind her eyepatch. Has her own countdown to destruction started? Suddenly, she's shocked to see Housen Ryofu - rival, enemy, and competitor for her boyfriend Saji - walking the streets. But Ryofu was killed at Rakuyo - what is she doing here? How is it possible that she survived? Can destiny be escaped after all...?

Ikki Tousen is well-known as being about booty-shakin' and boob-bouncin' as much as it's about the kung-fu fightin', and it certainly jumps in swingin'. Cameras are set at angles that give almost constant panty-shots, clothes tear apart like they're made of tissue paper, and when a magician character is controlling people's minds, what better way to transmit the bonding magic than with some girl-on-girl snogging? The characters show less skin in the beach episode! At this, you may be ready to dismiss the show as any one of a hundred ecchi anime, but this would be quite unfair and prejudicial - Ikki Tousen hasn't lasted so long by being generic and what sets it apart from the pack are some truly superb production values. This show is gorgeous - and not only the girls, but the art is nothing short of lavish... during one episode set in Chinatown, I paused the video and spent some time just admiring the detail on the town's luck gate, it was honestly that impressive. The background art is truly lavishly detailed, and equal attention is given to the foreground - the martial arts are not just a quick dashed-off setup to contrive a reason for boob-flashing - well, okay, they are, but that doesn't mean the fighting itself can't be worthwhile too. A lot of effort is shown in the fight scenes with fast and fluid animation, a great deal of movement, and powerful senses of meaty, weighty impacts as well with the focus on martial skill rather than magical fireballs.

This is still an ecchi anime though, and there are certain protocols that must be observed for politeness' sake - some of the situations in the mid-season episodes are eye-rollingly dumb (for instance the "twist" in the beach episode is nonsense, why would a danger sign be buried in the first place?) and even though Ikki Tousen  has everyone getting naked you'll still have the occasional "baka hentai!" yell if a male character is unfortunate enough to haplessly wander into shot. Ikki Tousen's origins as a decidedly irreverent retake of Romance of the Three Kingdoms have always been intriguing, but it remains a background presence for much of this series, only really being explicitly referenced towards the final arc - however, a sense of classical Chinese literature is maintained by each episode being ended with a sort of pseudo-PSA as the characters relate the preceding events to a maxim from Sun Tzu's Art of War. Personally I always thought that Sun Tzu's Art of War would be better-branded as Sun Tzu's Statements of the Bleedin' Obvious, but it does give the show a bit of character.  A lot more character is found in the voice acting. You'd think that an ecchi show all about the boobs would just be quickly put out with a perfunctory sub, but it's another measure of the considerable care and attention that Ikki Tousen enjoys that it is fully dubbed. The quality of the dub varies - some characters like Kan-u are very flat - but others are a delight, particularly the voice actresses for Hakufu and Ekitoku which are bursting with energy and enthusiasm and are wonderfully expressive and uninhibited.

There are a few inhibitions in other areas though. Peculiarly enough for an ecchi show Ikki Tousen is incredibly stingy with its actual nudity. Maybe once every second episode you'll be begrudged a meagre moment of nipple-slip, meanly snatched back in a scarce second with a fast pan away. This sort of miserly attitude to free-spirited fleshy fun seems to deflate the spirit of playful tomfoolery a bit, weighing down the show with a sense of reluctant half-heartedness. I can understand the frustrations that viewers get with censored ecchi shows which spend half the time blinded by Mysterious Light Beams when on television, but the TV broadcast is practically just an advertisement for the DVD release anyway... the show doesn't need to censor itself. As it is it feels like a grumpy, scowling concession - "oh fine, here then!" and whenever the famous exploding clothes make a hole around the midriff but stop short of the chest you get the feeling that this show, which is full of knickers-flashing and lesbian heavy petting, is simultaneously wagging its finger at you for indulging in it - I'm not quite sure whether to feel guilty for my shame or resentful of its hypocrisy.

Still, if you're finding that the main anime is blue-balling you a bit you can find a powerful relief in the extras, which feature an incredibly raunchy series of OVA shorts for your delectation and edification. Great Guardians does boast an impressive number of additional content, including a recording of the Japanese cast giving an interview at a convention "Radio Event" which is an interesting look at anime culture in its homeland. I would also heartily recommend the two episode commentaries with the English voice cast on the first disc - it's interesting technically as Great Guardians features the union of two separate voice casts from two different companies who worked separately on Battle Vixens and Dragon Destiny, but also it's just a simple pleasure to listen to, particularly the east-coast crew in episode five's commentary who show a really impressive rapport and gamesome engagement with the material.

There are a considerable number of ecchi fighting anime - Master of Martial Hearts and Samurai Girls are two titles available in the UK - but Ikki Tousen remains prominent within the genre for good reason, and that's because however lowbrow the content may be it still treats its audience with respect. So many ecchi series are wearily half-hearted, anaemically flopping on their marks with the expectation that just a bit of cartoon cleavage will be enough to stop you caring about the rush-job assembly, but Ikki Tousen doesn't see why it should stop you making a decent show on its own merits. Excellent production values and a keen staff add a shine to the characters' lipsticks; Great Guardians might be superficial but it's commendably slick.

8
It skimps on the clothes but not on the effort - a pleasant surprise.