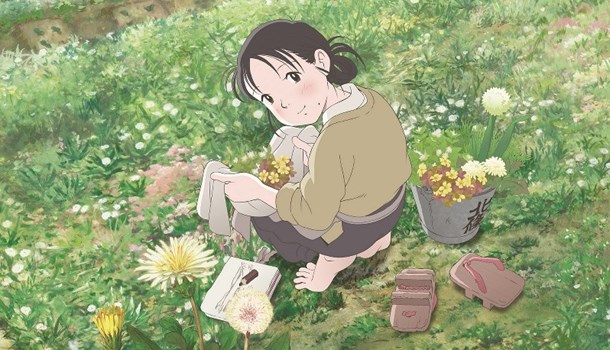 In this Corner of the World (Theatrical screening)

There were so, so many ways that In This Corner of the World could have gone wrong. Pushed ever so slightly in the wrong direction and the film could have been so very dark, depressing or just flat-out militaristic in the worst Michael Bay fashion. When a film is directed by the man behind the anime adaptation of Black Lagoon, subtlety and delicacy might not be something you'd expect - although the more recent Mai Mai Miracle is a definite counterpoint to that - and Animatsu's venture of obtaining global rights for the film could have been a very costly mistake. Given all this, I am thrilled to say that this adaptation of Fumiyo Kono's 2007 manga is not only good but is an utterly unmissable masterpiece.

Suzu is a young woman in Hiroshima growing up in the late 1930's and 40's. She lives a peaceful, low-key life on a farm with little in the way of aspirations other than to be able to draw, something at which she is very skilled. One day however, her life is changed as a young naval officer who she has seemingly never met arrives at her home seeking her hand in marriage. Ultimately deciding to accept the marriage proposal Suzu moves to Kure, a small port town near Hiroshima where she moves in with her husband, his parents and her new sister-in-law and her daughter. With the shadow of the war overhead, Suzu makes the most of her new situation, finding love and happiness amidst a time of great uncertainty.

Director Sunao Katabuchi has truly done an incredible job here with Suzu. She is an utterly delightful character to spend the course of a film with despite how difficult the subject matter must eventually become. She's such a charming, positive and hard-working character that its impossible not to empathise with her. By focusing the story on her life and by extension the daily lives of the ordinary Japanese people during this period of the war the film takes on much more personal stakes which really bring the cast to life whilst at the same time showing something that's rarely depicted in media that make it to the west. Most of what we get from that time period are traumatic tales like Grave of the Fireflies or occupation films. Just the simple images of how the Japanese citizens lived, performing basic chores all the way through rationing and the black market is just never really given any attention and the fact that such a strong narrative has been woven around this is fantastic.

Of course though the film can't solely tell of gardening, drawing and cooking. The war of course lurks hidden away in the background of most scenes as battleships patrol the sea, soldiers and seamen stroll through streets and rationing becomes an increasingly persistent encumbrance on the lives of the townsfolk. The result is that despite the happiness and fun that's occurring on-screen there's always a sense of unease lurking in the back of your mind and as the film ominously states the exact date of the film's events as life moves on the threat of the inevitable lurks persistently - you rack your mind desperately trying to remember if this is the day, and if so what will happen to Suzu and her new family. The tension is masterfully strung along too as near-miss disasters are commonly played out not for shock value but in the name of ramping up the tension. Entaro's collapse following an air raid may be played for comic effect, but you know in your heart that its merely a portent of what's sure to come as there's no way that a film set at this time and place could ever find a 100% happy ending no matter how much we may desperately wish that it would.

The art direction produced by MAPPA is spot on too. Whilst the opening scenes of the film feel almost a little under-done, the film's art style grows on you quickly as the delicate artwork progresses through the film, occasionally switching style for dramatic effect - here a scene in watercolour, there a burst of imagery that could have graced one of Van Gogh's canvases. The character designs are beautiful and are animated with a wonderfully skilled touch only rivaled by the film's backgrounds and attention to detail which are absolutely stunning. All of this is brought together with a fantastic soundtrack and a powerful set of vocal performances from the superb Japanese cast.

If there are any criticisms to be made of this film then it is only at the very end of the film that you'll find them, as a series of vingettes seem to indicate that the original script may have run for another act that was cut short for pacing reasons, but whilst they feel a little abrupt there's no doubting the charm, emotion and the overall relevance that they still hold to they story so I can't really begrudge them for being there.

In This Corner of the World is a real modern anime classic which absolutely deserves your attention. If it should grace your cinema, a local film festival or even manage a Your Name-esque reissue then you should absolutely head down to check this out. This is an utterly sublime film that deserves to be seen by as many people as possible.

10
An utterly enthralling vision of life that will leave its mark on you by the end.