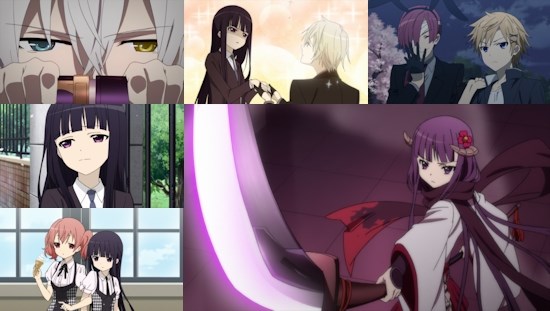 Ririchiyo Shirakiin is a troubled young girl who is painfully aware of her own bad habit of treating others harshly, but is unable to help herself. On top of this, she has the blood of her half-demon ancestors to contend with, and as such she seeks peaceful refuge at The Masion de Ayakashi (aka Ayakashikan). Once she arrives, she's greeted by her bodyguard, the cloying and sychophantic Soshi Miketsukami.

I have to admit, my initial reaction to Inu x Boku SS was pretty negative. With the main character essentially a snobbish bitch and her bodyguard such an unlikable and frankly downright creepy character, I didn't find much to latch onto as the show started. It's an odd beast as well, as it combines so many anime tropes into one series, creating a lack of cohesion.

The animation isn't bad, coming from David Production (Soul Eater, Jojo's Bizarre Adventure) and the music is pretty lively. The overall production values and character design are above average for this kind of show, and at twelve episodes it really does feel as though the budget has been well spent.

The opening episode showcases the magical combat abilities of the many varied residents of Ayakashikan, but strangely this aspect of the show is then muted for much of the run. It's not an action anime, even though the cast seems to have been designed with this in mind - instead it focuses on the relationships formed by Ririchiyo and her desperate attempt to overcome her own awkward interactions with others.

While Soshi's pandering, dog-like fawning over his "master" is often embarassing to watch, I did find that switching from the English dub to the original Japanese helped no end in stopping me punching the screen. His mannerisms are much more endearing in the original dub, so if you value your TV you may wish to switch.

What really surprises with this release is how the ending ties everything together. In fact, it pulls a very neat trick of rewarding your patience with the rest of the show by providing a fantastic payoff where the Ririchiyo/Soshi interactions suddenly make complete sense and are integral to the finale.

In short, the series is worth perservering with. It is a little clumsy, the English dub doesn't always suit the show and you may want to clobber Soshi with his own beating heart at times, but the ending makes the whole thing worth it and saves the show. Without this final push, Inu X Boku would merit a 6 at just above average, but the solid 7 is justified by the deft characterisation in the later episodes.

If you're a fan of supernatural adventures, cute girls and dishy bishies, then this could be the show for you.

English and Japanese stereo audio with English subtitles.  Clean opening and closing animations are the sole extras across these two discs.

7
A patchwork of anime tropes stitched together to make a sometimes irritating, but ultimately rewarding, viewing experience.