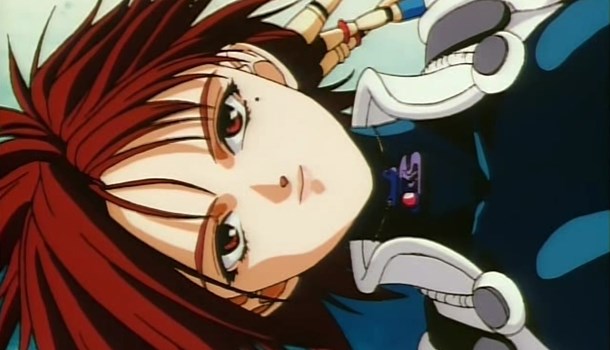 Do you miss the traditional 1990s sci-fi anime OVA? It feels like this was an era where there were no shortage of space-faring, butt-kicking heroines happily whaling on humans and aliens alike in the name of money, justice or whatever motivation tickled their fancy.

If you yearn for the return of that era... well, there isn't a lot we can do really, but you can at least relive a part of that era thanks to MVM Entertainment's re-release of Iria: Zeiram the Animation on DVD, giving another opportunity to watch this six part OVA in all of its glory.

As you might expect, the series revolves around Iria, a rookie female bounty hunter in the charge of her older brother Glen and his comrade Bob as they roam the galaxy taking on jobs and earning their keep. When what should have been a routine job collecting cargo from a ship goes horribly wrong, Iria is separated from the group and finds herself having to deal with the cause of the operation going awry - a horrifying, immortal being known only as Zeiram. With the safety of her brother unknown, Iria has to work alone (give or take some assistance or hindrance from those she meets along the way) to strike out as a bounty hunter in her own right and tackle the galactic threat that Zeiram represents - a task that reunites her with her brother in an unexpected way.

All in all then, pretty standard fare that nonetheless sounds entertaining enough, so let's start with the positives of this series. For starters, Iria herself makes for a great protagonist - she's more than just a badass bounty hunter but a well-rounded character in own right, with a softer side and sense of justice underneath that hard-edged exterior, and this alone really helps to mark the series out somewhat and drive it along as you find yourself rooting for her.

Alongside this, the show's aesthetic as a whole is pretty good - yes, parts of Zeiram's design (and his introduction into the world) is as blatant a rip-off of Ridley Scott's Alien as you could ask for, but that aside there are some striking pieces of character and world design on show here, alongside some admittedly daft but unique ones.

Offsetting these pleasing characters and scenarios is the creeping realisation that the OVA itself has a far from spectacular narrative to lean upon - its story is functional, no doubt about it, and it allows for some great action scenes throughout, but there's nothing that you could particularly call interesting about it once it settles into its groove; even some of its more promising story beats aren't really leveraged as fully as they could have been, and there are few surprises to be had on the viewer's part as the show progresses.

Not helping the show's delivery is a poor (by modern standards at least) English dub which often seems to make little effort at matching lip flaps on-screen, or indeed at trying to sound engaged about what's going on in the show. Normally this wouldn't be a huge deal as there's always English subtitles to rely upon when a poor English dub presents itself, but this merely introduces another issue - there are subtitle timing problems throughout the first half of the OVA which effects large chunks of those episodes to the extend where they're difficult to read, coming as they do significantly before or after the actual spoken dialogue. This is seemingly a known issue that originates from the US masters for the show, but the fact that it remains here is still an irritation that makes fully enjoying the series with its original Japanese audio decidedly difficult.

As a whole, it's difficult to recommend Iria as anything other than a blast from the past - it certainly offers something different to most modern anime fare but "different" doesn't necessarily equate to "good", and when push comes to shove Iria is a decidedly mediocre effort, especially when you factor its subtitle issues and English dub into the equation.

5
It's a blast from the past for sure, but that blast doesn't entirely consist of fresh air.
LATEST REVIEWS