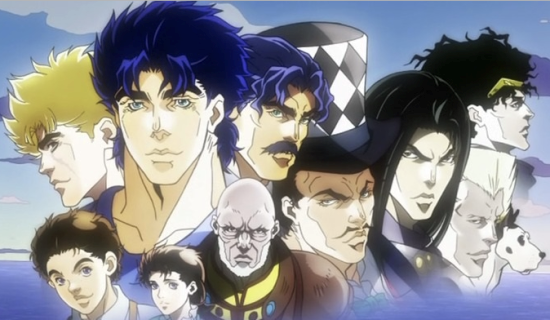 My first criticism of JoJo’s Bizarre Adventure is that the title is a hilarious understatement! This release includes the first (2012) round of David Production’s adaptation of Hirohiko Araki’s ongoing(!) 1987 manga of the same name. Covering two story arcs, subtitled Phantom Blood and Battle Tendency as part of a single 26 episode series, in its original broadcast run.

The story begins in Victorian England at the site of a bloody coach accident. Local brigand Dario Brando happens upon the accident and summons help for Joestar, who vows to repay him for his aid. Twelve years later Brando’s health fails, so his son Dio is adopted by the Joestars in recompense. Dio Brando and our protagonist, Jonathan ‘Jojo’ Joestar meet for the first time. Jojo is a decent young man if a little wilful and childish, Dio is on the other hand basically evil. By way of an introduction, Dio kicks Jojo's pet dog, hard and in the face. By the end of the first sixteen minutes of the first episode, Dio gouges JoJos eye in a sparring match, poisons his friends against him, and sexually then physically assaults his love interest. Later, the aforementioned dog is roasted alive in an incinerator in an act of petty revenge.

Nonetheless after a series of early confrontations the two grow up to be friends, or so it would seem. The series turns to the supernatural when Dio makes a chance discovery about a sinister stone mask discovered by Jojo’s late mother. He plans to use the mask to kill his brother and make it look like an accident. In testing the mask, which shoots out spikes into the wearers brain when exposed to blood, Dio discovers its true purpose is to create vampires. He barely escapes with his life, while JoJo discovers that Dio has been poisoning his father to steal his fortune.

The first mini-arc, covering the resolution of this plot sets a lot of the tone for the rest of Jojo's. It reflects the source material, which pivots a lot between a brisk coming of age story and supernatural horror with heaps of gory spectacle. Jojo is, even at this early stage, a dull character. An archetypal, impossibly virtuous (and implausibly muscled) gentleman son of an impossibly virtuous, generous gentleman father. He fights for love of his family, friends and honour. Yawn. Dio is similarly one dimensional, being a creature of pure evil, but is delightfully camp and his Japanese voice actor steals the show.

All the action is turned up to 11, with typical shounen-style shouted commentary by bystanders (cue Phantom Blood’s best side character and fan favourite, Robert E. O. Speedwagon) or by an inner monologue. The set dressing is intended to shock. A slum described as the worst in London is illustrated by showing a local cat eating a puppy, to drive the point home. The gore is extreme, but doesn’t seem especially grim as everything about the show is extreme.

David Production have a signature style for all of their Jojo's adaptations to date. Which is radically changing the show’s colour palette at times of high tension. This is a bit disconcerting while you get used to it, but once you do it becomes part of the background craziness of the setting and the acting to create that signature Jojo's style.

Back to the plot. JoJo and Dio have a spectacular, bloody confrontation in which JoJo is victorious. Dio is (surprise, surprise) not dead and is making mischief elsewhere. This is where the series pivots again, moving into the territory of the stereotypically shounen. JoJo meets a wise master with magic powers, undertakes training under him to defeat Dio (complete with montage) and sets off on a quest with his friends in tow. Now during fights strange rules about the battle magic are introduced, attack names are yelled and undead horrors are splattered with abandon. This would be pretty old hat if not for Araki’s talent for the hilariously absurd; Jojo and his master Zeppeli can perform a “Zoom Punch” by dislocating their joints to send their fists further. A villain is introduced by crawling out of the neck of a dismembered horse. Jojo must complete a fight holding a glass of wine (which can detect zombies) without spilling it or his master will reject him.

It all gets a bit messianic here and Jojo becomes even more impossibly virtuous (possibly also more muscular) and Dio even more wicked. The opponents, settings and events become more and more absurd as this arc plays out. It finishes with a blowout confrontation with Dio, who has infested an enormous fairytale castle with zombies, human-faced toy dogs and buckets of roses. Dio is dispatched (again) but isn’t quite dead (again) and comes back with the help of his spectacularly racist caricature of a henchman to haunt Jojo one more time to finish Phantom Blood. This is my least favourite arc, but is worth seeing as an introduction to the profoundly weird world of Jojo’s Bizarre Adventure and its commitment to having nothing, absolutely nothing, in moderation.

The second arc, Battle Tendency takes place almost 50 years hence, featuring the grandson of the original Jojo. He’s also Jojo, but this time for Joseph Joestar. The tale begins in 1930s New York and already it’s a marked contrast to the first act. It’s immediately more colourful, with more diverse backgrounds and characters. The new opening is an upbeat colourful riot, distinct from the po-faced original. ‘Roundabout’ by ‘Yes’ remains the ending, but different parts of it are utilised depending on the episode’s events. David Production seem to have gotten more into the swing of making it. This is reflected in more consistent visuals, more adventurous use of the radical colour swapping, split screen, effects and better background music. The fights have improved flow and the shots are framed better to show this off.

The biggest change is the protagonist. Joseph is immediately a more watchable character than his dull grandpa. While he’s a good man at heart, he’s childish, temperamental, he goads and tricks his opponents, and will do anything sneaky he can to win. Speedwagon makes a return, but spends much of the time reprising his role from Phantom Blood: yelling exposition.

This new Jojo first has to deal with a traitor from the past, then heads to Mexico to rescue his friend and grandfather figure Speedwagon, who is being held captive by Nazi scientists. They’ve discovered an even more sinister threat than Dio. The creators of the stone masks are ‘The Pillar Men’, supernatural beings who have hibernated in stone pillars for 2000 years and are awoken by Nazi experiments. Dealing with that threat and dispatching the sinister Pillar Man ‘Santana’ by the skin of his teeth, JoJo sets off to learn about the others. Already we’ve visited New York and Mexico, next up are Rome and Venice. It’s less of the ‘Bram Stoker’s Fist of the North Star’ gothic horror (with buff men) of the first arc and more of an ‘Indiana Jones and the Fist of the North Star’ globetrotting adventure (with buff men).

The events are, somehow, more ridiculous and turned up to 11 (Ed - If it was already 11, surly it's at 12 now?) than those of the first arc. Oddly they fit more naturally into the show now, having shed the Victorian trappings of the past and the boring protagonist. The Pillar Men are worthy villains with interesting personality quirks, abilities and fighting styles. There are some genuinely laugh-out-loud silly moments, so preposterous that they stand out even in the background madness of Jojo’s. Naming an attack “Space Ripper Stingy Eyes” or the Ben Hur pastiche chariot race spring to mind. The new companions are fun, given more time and importance. They interact with Jojo more by bouncing off each other than previously, where it was purely hero worship by anybody that ever met the stoic Jonathan.

This is vintage Jojo’s Bizarre Adventure being adapted by a studio that’s really getting to grips with the project. What is it though that gives this wacky series the status of a fan favourite? Is it the extreme outfits? The extreme muscles? The extreme posing? The extreme violence? The extreme, er, everything else? It’s hard to describe what makes the whole project hang together. It walks a very fine line between being straight-faced and self-aware about how silly the whole enterprise is, while just being a lot of fun to watch.

7
A wonky first arc, but ridiculous fun awaits in the second.
LATEST REVIEWS