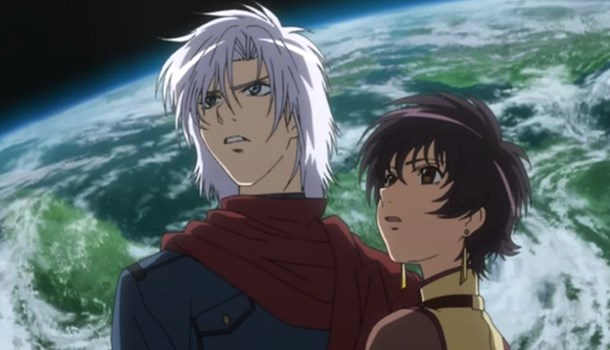 
Let me start by saying this…   Jyu Oh Sei: Planet of the Beast King, is a bit of a mixed bag. The kind of bag that’s been abandoned in your loft for years, and when you go trawling through its contents in the hope of finding something of worth, you find a revelation instead.  The revelation of why you originally dumped the stuff in the loft in the first place.  It’s a shame because the concept of the story, while not executed very well, is actually pretty good.  It’s just the overwhelming sense of mediocrity that sweeps over you is impossible to ignore.

Jyu Oh Sei starts off in familiar Sci-Fi territory; a space station in the Balkan system.  Two identical looking brothers, Thor and Rai, arrive home one day and discover their parents have been mysteriously murdered.  They are subsequently captured and jettisoned off to a nearby penal planet called Chimera where our story is primarily set.  Thor and Rai find the planet dominated by deadly, giant carnivorous plants and between the local flora and pockets of other exiled humans, they quickly find themselves on the back foot.  As events unfold, they find a tribal hierarchy system has formed among the human settlers, who have split themselves into four tribes, or “Rings”.  It’s all a bit “Lord of the Flies” but as stories go, the scope works and could easily have been expanded into a longer series given more thought (and money).

The series is set across 11 episodes and while the pace is swift, it falls victim to trying to cover too much in too little time.  Plot elements are brought up, only to be resolved within the same episode and ultimately it all feels a bit contrived.  In the gaps between obvious plot devices, the creators have resorted to throwing in copious quantities of melodrama to try and cover up the lack of time spent getting you to care about the characters and the plight they’re in.

Right up until the final episode, my feelings about Jyu Oh Sei were mostly indifferent.  I liked the idea of the story but in reality, despite its potential, it never quite stepped up to the plate.  Then the finale comes and kills off anything that might have been good about the series and walks out the door.  My indifference turned to anger and it wasn’t because I cared about the story or the characters, it was anger at the writers for following this ridiculous prevalent idea that to write a good ending, means to turn everything on it’s head for the sake of it.  Just let the story be what it is.

On the technical side, there’s not much to save things either.  The animation and character designs are average and typical at best.  The English voice actors sound childish and don’t lend themselves to the on-screen character at all.  It does appear to have genuine subtitles as opposed to dubtitles, which is something, but after all is said and done, this is a distinctly below average series.  It started off with potential and ended up squandering it with fruitless melodrama and trying to do too much in too little a time.

3
It starts off with potential, leads into very average territory and then ends awfully. Jyu Oh Sei travels very quickly in the wrong direction.
LATEST REVIEWS