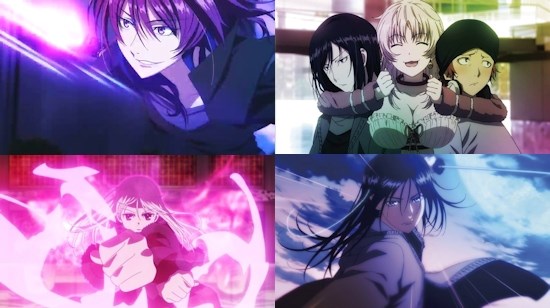 As the female audience for anime (and their spending power) has grown, we've rightly seen an increase in series designed to cater primarily for that audience. Perhaps more surprisingly, one thing we haven't seen all that much of is shows carefully crafted to target both male and female demographics in equal measure - some series have succeeded in doing this largely by accident, but K is perhaps the most notable recent example of a show that seem squarely aimed at giving everyone what they wanted (or at least, what they think everyone wants).

Having enjoyed a certain amount of success with its TV outing, K now returns with a bigger budget via this theatrical outing which continues its story of a country ruled over by various so-called "Kings" and their minions, all of whom boast some kind of special power or other. In other words, beware of some spoilers ahead if you haven't finished watching the series yet.

Having vanished without a trace at the end of the series, protagonist of the TV show Shiro still remains missing as we join Missing Kings, and despite several months of searching friends and subjects of the "Silver King" Neko and Kuroh are still no closer to tracking him down. Having returned to the island where the events that led to his disappearance took place however, they quickly find themselves drawn into an entirely different brand of trouble.

The cause of this trouble is the Green King, who - via his talented vassal Yukari Mishakuji - seems intent upon stirring up trouble, leaving the Blue King's troops scrambling into action and ultimately knocking on the door of the now fragmented and demoralised HOMRA group who are still reeling from the Red King's death. But what exactly does the Green King want to achieve from these actions?

Well... I sure wish I knew, but even having watched Missing Kings in its entirely (post-credits sequence and all) I genuinely have no idea. Bizarrely, after all of its setup and some (admittedly rather well-animated action scenes), the point that should be a pivotal one where this nefarious plan is outlined or revealed instead turns into a damp squib which amounts to said King saying "eh, never mind" and bringing the film to an anti-climactic close. If this shift in events made sense it would perhaps be forgivable, but it really doesn't - the entire way in which things pan out is illogical no matter which way you look at it, with the only real hint as to the film's purpose proving to be an almost desperate gambit to set up another film (or TV series) further down the line off the back of this attempt.

Unfortunately, even the build-up to the film's finale is nothing to write home about - much like the TV series before it, everything about K remains an obvious case of style over substance. Its characters and their attire are pretty, its colourful depiction of the world is eye-catching (although GoHands' current "house style" is far less interesting know that they use it constantly for all of their productions), and the core of its premise isn't half-bad if they could actually write a coherent and interesting story around it. Instead, we're left with a film that - much like its predecessor - jumps around aimlessly with no real flow or focus, flinging in pretty male characters here and female panty shots there as what feels like an anime created entirely by committee to please all of its target demographics plays out before you.

Then again, if the K TV series entertained you then this is absolutely more of the same, so fans of the show will love this extension of and addition to the series. The film is also visually appealing and its increased budget shows throughout in both its fluid action set pieces and overall aesthetic, and lastly the soundtrack is top-drawer, not least the moment where we're treated to not one but two Yui Horie insert songs layered on top of that aforementioned improved animation.

Beyond those existing fans of the K franchise, there's not a lot to recommend here as a whole though - Missing Kings has neither the ambition nor the talent to tell an interesting tale, and sadly its most entertaining moments tend to come from its flashes of comedy which are too few and far between to make any real impact. Given our thoughts on the TV series, this outcome is far from surprising, but we still hoped for something more from the undoubted potential of the world K, and Missing Kings, have to dip into.

K: Missing Kings was screened in Glasgow and Edinburgh as part of Scotland Loves Anime 2014