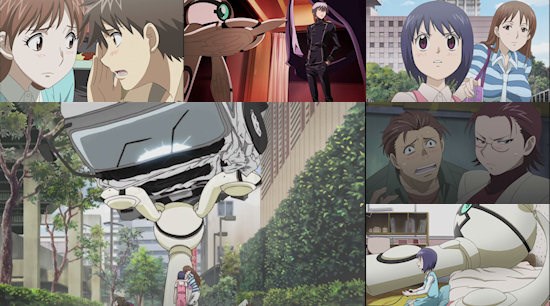 Moving from the country into the big, bustling city is a ripe furrow for any story-telling medium to plough given its fish out of water connotations - however, when it comes to new streaming series Kamisama Dolls there's far more to focus on that merely the jump from small, insular village to the heart of Tokyo.

At the centre of what initially seems to be a decidedly ordinary story is Kyohei Kuga, our aforementioned country boy in the city who is studying at a university in Tokyo.  Indeed, Kyohei isn't the only one to have left his village, as he finds himself on the same course as the beautiful (and suspiciously top-heavy if you ask me) Hibino Shiba - a similarity that seems to make them a natural pairing, although not quite as closely as Kyohei would like.

Even when this pair of individuals come across a dead, brutalised body in an elevator at the end of a drunken student party, it seems to be just "one of those things" - a horrible incident that you might expect to see on the national news.  However, this event marks the return of a decidedly unwelcome "ghost" from Kyohei's past.

As well as this less than heralded arrival in Tokyo, Kyohei also finds himself joined by his sister Utao, which gives us more of a window into the village from which his family hails - more specifically, the village's well-kept secret; a collection of large robots of sorts known as "kakashi", which can be controlled via their chosen owners or "Seki".  This role as a Seki is just one of the things Kyohei seems to have run from in his decision to move to Tokyo, leaving his younger sister to take over his mantle - a decision he may well begin to regret as events unfold before us.

Perhaps the most striking thing about these opening episodes of Kamisama Dolls is just how uneven its treatment is, both visually and (more importantly) in terms of story-telling.  Large swathes of episodes focus on pointless fare like Utao eating cake or lounging around the house, while moments designed to showcase what a Seki and its kakashi can do feel overly forced to the point of being trite.  Indeed, even what should be important and dramatic moments in the opening instalment are frittered away without generating and real shock, intrigue or tension in the viewer as to what is going on.  The animation quality of the series to date is just as uneven, frequently giving off that feeling of not looking quite right and certainly never living up to the panache exhibited by its colourful opening credits.

These mis-steps are all the more frustrating because you get the feeling that there's a really good series begging to get out.  Kyohei's wannabe nemesis Aki gives off a satisfyingly unstable aura while teasing us with the prospect of plenty of untold secrets about the show's main character and his homeland, while other introductions also ramp up the feeling of impending danger when they aren't being pushed aside by clumsy attempts at building characters or their power levels.  Above all else, the "robots" (for want of a better description) in Kamisama Dolls are cool - powerful, imposing, slightly creepy and eminently difficult to handle, leaving the moments when they're put to use to be far more impressive than your usual "jump in, take control, win the day" strategy so often seen in anime.

There's certainly still potential in Kamisama Dolls at this juncture - some suitably bad-ass new characters are only introduced fleetingly in episode three, and the series is laden with suggestions of guilty secrets and hidden pasts that should breathe life into the show as we delve further into the history of Kyohei and company.  The only worry is that the series is going to be distracted too frequently by other matters - the traversals into "hey, look how adorably clumsy Utao is" seen in these early episodes seem to be a blatant attempt to draw in a wider audience and make the show more merchandisable, but they only serve to demean the core aspects of the series and detract from the interesting points that it has to offer.

If these first three episodes of Kamisama Dolls were to be presented with a school report card, it would most certainly be accompanied with a note saying "must do better".  To look on the bright side, that means that we can see the potential of the series and still hold out hope it can live up to that potential to some degree in the near future.  On the glass half-empty side of our deconstruction, there are quite a few flaws on show in the series to date, and we're not entirely convinced that the remaining episodes will even try to address them to a necessary extent.

6
Some good ideas and interesting plot points are too often lost in the mire of poor scripting and needless distractions to be particularly enjoyable at this point in the series.
LATEST REVIEWS