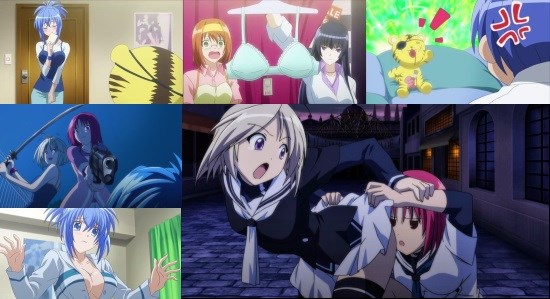 In the fighting girl genre it’s always going to be tough to stand out from the crowd given the existence of series like the excellent Mai-Hime and the long-running and ever popular Ikki Tousen franchise. Now to add to their ranks we have a newcomer, as MVM release 2009’s Kämpfer in the UK along with its 2011 OVAs.

Natsuru Seno is your average high schooler (as he must be by mandatory anime writing law). He goes to school with his friends, has a crush on a girl and all is normal until one day his stuffed animal (a tiger with an eye patch and its intestines hanging out) comes to life and explains to him that he is now a magical girl. I’ll just let that one sit for a moment. Yes, he is to be a magical girl. His shiny new bracelet (which we can only assume he can’t remove as he never actually bothers to try) will at times of stress or danger (or sometimes just because) transform him into a buxom young woman who is supposed to fight other magical girls who have the misfortune to be wearing the wrong colour bracelets. To try and get to the end of his ordeal Natsuru teams up with Akane, a quiet librarian who can transform into a fiery and wilful redhead, and the School Council president Shizuku to try and get to the bottom of things. Well, once they get past the school festival because that’s important, and they absolutely have to make time to go to the pool, oh and the aquarium and... erm... what were they supposed to be doing again?

On paper Kämpfer looks fantastic. A set-up allowing for a bevy of cute girls and lots of fan-service? Check! Potential for lots of action? Check! A load of big name voice actors? Check! Unfortunately once the staff got around to executing all of this into an awesome show things started to go wrong pretty fast.

It’s fairly clear that the concept behind this was to produce something akin to the more recent Highschool DxD with its near-perfect blend of action, fan service and plot, but in the case of Kämpfer none of this really works. For starters the plot is utterly mangled. After setting up the concept of the magical war of the Kämpfers in the first couple of episodes it then gets ignored entirely until the last couple of instalments, with the show choosing instead to focus on harem comedy hijinks. These could have worked well - fans of Ranma ½ will attest that a character who can swap genders at a comedically appropriate moment can work brilliantly - but here too they jettison that concept almost straight out of the box and Natsuru tends so stick to a single gender most of the time. This is combined with the fact that the fan service is just far too tame for what the show is trying to accomplish - even given the nature of its light novel origins Kampfer desperately needed to push things further if it wanted to go down this route, but instead everything just ends up feeling flat. This is also hampered by the fact that the writers don’t quite manage to get the balance of the comedy right and constantly jettison concepts at a rate you’d expect of a improv comic rather than an anime which you assume had actual scripts to go off.

Causing further issues is the fact that the animation budget was clearly nowhere near what any element of the series required. The character designs are flat and lazy and the magical girl transformations are laughable as they all wear their own school uniforms and just change the colour of their hair – Shizuku offends this further by only changing the colour of the shadow of her hair, making it difficult to tell if she’s actually transformed or not in scenes.

The voice cast try their best but even here the series mucks up by going out of its way to break the fourth wall to point out the presence of all these famous actors in a way that, in a post-Deadpool world, just seems dull and awkward, especially since the big name members of the cast get little to do and essentially just cameo in the odd episode.

It’s safe to say that Kämpfer is not a great show and certainly isn’t one to rush out and add to your collection. It’s a real shame as this show had real potential in terms of its concepts, but the comedy of errors which went into seemingly every aspect of the show's production have really robbed it of anything fans could latch onto.

Japanese stereo audio with English subtitles. As well as the full series, two OVA episodes are included here along with clean opening and ending credits.

4
Some good ideas, but this show falls into too many traps of its own making.