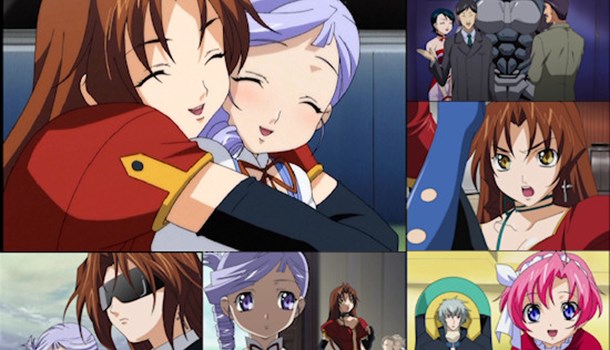 Éclair and Lumiere might look like a pair of young, normal and mild-mannered receptionists for a large organisation, but don't let their looks deceive you - when trouble comes calling at the Global Organisation of Trade and Tariffs (or G.O.T.T. for short), this dynamic duo have plenty in their arsenal to ensure that criminals are captured and the general public are kept safe.

In fact, despite the rather dour name of the organisation for which they work, Éclair and Lumiere are at the forefront of a decidedly dangerous mission, keeping the galactic economy stable by chasing down various ne'er-do-wells and nefarious plots in the name of liberty and capitalism.  More precisely, these two girls make up a team of ES Members, denoting their place as part of a crack outfit who are the scourge of anyone who might oppose G.O.T.T. or their goals.

It's very much a case of so far, so simple as Kiddy Grade begins in a firmly episodic fashion - with each outing we see Éclair and Lumiere taking on a different case at the behest of their chief, with the former sporting some handy abilities when it comes to using lipstick that stretch far beyond mere make-up while the latter proves to be the "hacker" of the duo with some seriously impressive capabilities when it comes to manipulating electronics.  Accompanying the pair on their various adventures is an auditor named Armblast (or Armbrust, as it seems that even the show's subtitles can't consistently agree on his name), whose role is simply to record events but frequently turn out to be far more "hands-on", leading to suspicions that there's far more to his role than meets the eye as he wheels and deals, seemingly with little consideration for the safety or mission of his cohorts.

After spending some time having fun with this episodic outlook, putting together some accomplished plots and ideas as it goes while maintaining a sense of fun and giving some hints into the history of its main characters, things begin to take a more serious and darker tone as conspiracies and controversy begin to emerge from within the walls of G.O.T.T.  As Éclair's past in particular comes back to haunt her quite literally, we see another side to the work of the organisation's ES Members as the need arises to do the dirty work of the Nouvlesse, the elite group who hold the keys to the galactic economy - think of Wall Street bankers, yet even less likable and with a propensity to disregard the lives of the "commoners" beneath them.

When the requests made of our main fighting force become too unbearable, the show really enters top gear as friends become foes and the entire structure of G.O.T.T. is ultimately thrown into confusion against the backdrop of even more malicious machinations from those nasty Nouvlesse.  Unfortunately, this is also the point where Kiddy Grade starts to become in turns confusing and convoluted - some of the ideas and concepts it tries to work with are nice, but their execution is too stilted and occasionally just plain badly directed to work properly, which takes the sheen away from the series just at the point where it begins to deliver on its promise before running out of steam entirely for its final climactic storyline.

Despite that disappointing and even underwhelming finish to the series, there's still some praise that has to be reserved for Kiddy Grade - as I've already mentioned, some of its episodic outings are well-realised, and the build-up and execution to the pivotal episodes which turn the series on its head and give it its ultimate raison d'être work excellently.  On top of that, the show is aesthetically pleasing for the most part all of the way down to its frequent and unnecessary but never overly obtrusive fan service - it might be a decade old, but the series still looks pretty good in general as it goes about depicting its space-faring universe.  Sure, its action scenes might not be the most daring or ambitious, but even when push comes laser blast the on-screen action has its moments.  In addition, both Japanese and English voice acting casts give a good account of themselves, bringing the show's variety of sleek character designs to life.  Our review copy of the series did seem to be missing the odd line of subtitles in later episodes, but thankfully nothing too crucial to spoil enjoyment of the series as a whole.

With twenty-four episodes spread across eight discs (that means three episodes per disc, making for luxurious video quality compared to a lot of more recent anime DVD releases) at a cost of under £30 at most retailers, MVM Entertainment's complete collection re-release of Kiddy Grade is great news for those who missed its UK release the first time around, and I have no doubt it'll find a fair number of new fans who have never seen the series before.  Certainly, as a newcomer to the show myself, watching Kiddy Grade was generally an entertaining experience - its "ass-kicking girls in a science-fiction setting" is never going to go far wrong with the average anime fan, and at times you can't help but lap this setting up when it finds a particular juicy (or even a cheesy but satisfying) path to traverse.

Beyond that, the series clearly has ambitions to be something darker and smarter than episodic action fodder, but eventually it proves to be altogether less accomplished at going down this route despite some earnest and genuinely promising beginnings.  If you can see through these flaws and fall in love with Éclair and Lumiere by this point (and there is quite a lot to love about this pairing, bless them) then you might forgive such misfirings, but taking a step back Kiddy Grade is a series that is fun but flawed, so be prepared for some moments of disappointment during its second half.

6
Its an entertaining enough series with some stand-out episodes and moments, but a convoluted and overly elongated second half notably take the sheen off an otherwise fun series.
LATEST REVIEWS