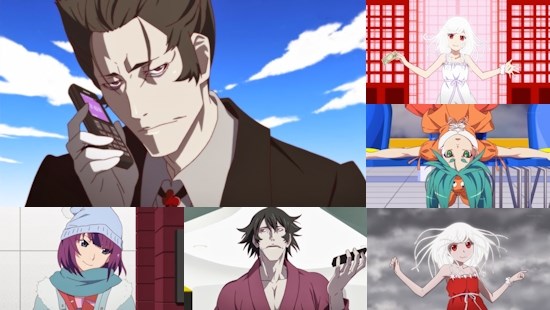 The Monogatari series as a whole might not be coming to an end just yet (so fear not, those of you who can't get enough of the adventures of Araragi and company, more is on its way to the UK), but Monogatari Second Season comes to its climax via its final six episodes which comprise Koimonogatari. Just like the beginning of its very first story arc in Bakemonogatari, the whole tale revolves around a problem for one Miss Hitagi Senjyogahara.

If you've been keeping up with the Monogatari series, you'll know that those troubles stem from the events of Otorimonogatari - in short (and be warned, we're about to unavoidably delve into spoiler territory unless you've watched the rest of the series up to this point), both Senjyogahara and Aragagi's lives are in danger, with a very precise date set for their demise: the day of their graduation from high school.

Normally, this would be the kind of dilemma that Koyomi would shrug off with a laugh (probably while simultaneously perving over one of the show's female characters to boot), but even his semi-vampiric nature isn't enough to take on the literal god which Nadeko Sengoku has become. Given that this newly formed deity can't be beaten with brawn, how about some brains? To this end, Senjyogahara turns to perhaps the unlikeliest of allies: Deishu Kaiki, the very man responsible for the apparition which dogged her for so long and began the series. Will Kaiki be able to deceive Nadeko and save Hitagi and Koyomi's lives? Will he even want to, for that matter?

The result of this scenario is a joyous one on multiple levels - once again, we have a story arc shorn almost entirely of Araragi's influence (and for once he can't even step in to save the day at the last minute), and this tale is all the better for it, instead giving over the stage largely to Kaiki, a dour enigma of a man who finally gets his time in the spotlight. Kaiki proves to be the perfect foil for the story - an unreliable narrator who brazenly lies (or does he?) as the story unfolds. Those possible untruths also prove pivotal to one of the main thrusts of the story, that being the relationship between Kaiki and Senjyogahara herself. As a man who conned her, it seems clear that there should be nothing but animosity between the two characters, but the truth proves to be very different, and come the end of the story you'll be wondering whether Kaiki was actually a villain in the case of her suffering at all.

It's a mixture of Kaiki's internal monologue and his discussions with Hitagi that steal the show here - there are hilarious moments to be had as the two of them try to outsmart and outmanoeuvre one another early on, but as the story progresses there are some surprisingly touching moments to be found here too. Indeed, the hallmark of Monogatari Second Season has been its expanding upon the characters of its cast in some fascinating ways, and this continues to be the case with Koimonogatari - we get to see a surprising side to Senjyogahara, the lid is at least partially lifted on Kaiki, and we finally get to the root of what has ultimately led Nadeko down the path she has travelled.

This is delivered with the kind of visual flourishes you'd expect from the series at this point, and it continues to look the part - what was once a striking aesthetic now feels like the norm after so many episodes within its world and architecture, but that doesn't mean that it isn't as impressive as it ever was, as an example of how to turn limited animation into something incredibly engaging. A striking soundtrack and Japanese cast voice performances only add to the overall impression that this continues to be an incredibly polished series.

Also as per previous releases, Koimonogatari sports the same comprehensive subtitles, even for those single frame walls of text that you can never hope to read without judicious use of the "pause" button of the remote control. It's a much-needed attention to detail, and ensures a continuation of the high quality of these releases even if you aren't getting much in the way of bonus materials - yes, this is the point where I again lament that none of the Japanese cast commentary tracks have been included or translated on these releases since Bakemonogatari.

As an appropriate ending point to Monogatari Second Season, but with more still to come, Koimonogatari is undoubtedly a great example of the franchise playing to all of its strengths - its comedy rarely misses the mark, its characters and their interactions are enjoyable and occasionally sublime, and the twists and turns of the story itself are a delight to behold from the opening scene of the first episode to the closing of the last. Your exact mileage may vary depending on what aspects of the series you enjoy most, of course - such is the problem of delivering any opinion on an ensemble comedy-drama delivered across so many volumes - but to my mind this is one of Monogatari Second Season's best arcs. It might not have the hefty emotional punch of the end of Nekomonogatari White or Onimonogatari, but it delivers consistently across its six episodes to give fans plenty of what they desire.

8
An interesting story wonderfully told ensures that this is one of Monogatari Second Season's more memorable story arcs.
LATEST REVIEWS