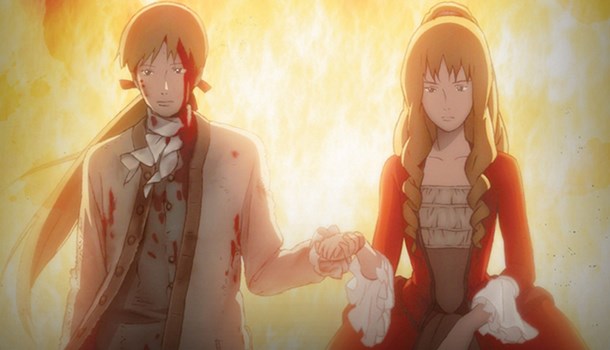 The second volume of D'eon continues to delight with more twists and turns leading our heroes from their beloved France to Mother Russia - and there are new foes and more intrigue along the way.

Everything D'Eon managed in its first volume it repeats here to grand effect. The animation isn't especially eye-catching, but Production I.G's stellar CGI work makes the backgrounds incredibly rich and detailed. Even so, all this effort would be for nothing if the story and characters weren't so spot on (I'm thinking Otogi Zoshi was lacking here) but the latest developments really are well thought out and genuinely intriguing.

Take for example the conclusion of the initial investigation - with the main lead escaping to Russia, D'Eon and his Knights are asked to consider taking one more mission, one that is so dangerous it's practically a death sentence. But each Knight is called to see the king separately, so we don't know what their orders are. Add the fact that we now know that D'Eon's sister was betrayed by someone she trusted, and suddenly the central cast looks suspect.

The series also continues to follow its remit to be informed by history rather than a slave to it - some of the dates have been tampered with, but all the main protagonists had a historical counterpart, particularly D'Eon, who was indeed sent to Russia by his King to visit the Russian Empress - understanding these details isn't central to the plot, but its nice to have that extra level of depth.

With all the precision of a period novel, D'Eon manages to capture a flavour rarely seen in anime, and with any luck following volumes will prove to be just as gripping as this one.