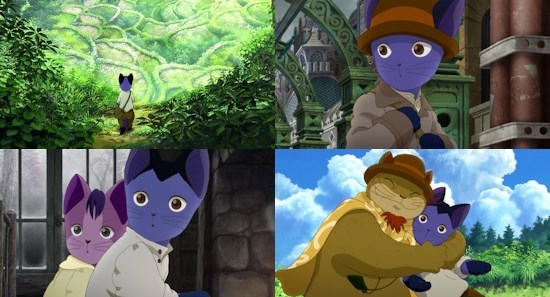 Mention the name Kenji Miyazawa to an anime fan in some kind of word association game, and chances are they'll come back with Night on the Galactic Railroad, a novel which is famous in its own right but is particularly well-known in anime viewing circles for telling its rather deep and philosophical story for children through the medium of talking cats. This brings us to The Life of Budori Gusuko, another Miyazawa novel that has been adapted into animated form before in the mid-1990s, but which received another adaptation last year which stuck to that time-honoured tradition of anthropomorphising all of its characters as felines.

As you might expect from its title, the movie takes us through the life of one Budori Gusuko, who we first join as a boy who lives happily as part of a family unit alongside his parents and younger sister. Living in a remote forest, Budori and his family never want for anything within their simple but enjoyable existence... until, that is, famine hits the region. One bad year turns into several as the climate changes markedly, meaning that food is scarce and ultimately non-existent - a fact of life that places immense pressure on his parents in particular, causing them both to leave the family home. When his sister is also snatched away from him, Budori Gusuko is left to go it alone in the big bad world.

Thus, Gusuko's journey takes him through the mire of capitalism as he works as a virtual slave for a silk farmer, into the world of agriculture as he then joins a speculator and learns how to grow and harvest crops, before moving on to a life as a geologist where he studies volcanos and learns how to measure their effects to predict eruptions and thus protect the populace from danger. Throughout all of this, however, Budori Gusko is followed by a desire to return to his roots and help those plagued by famine - a cause that he would do anything to support if it means returning the climate to its former state.

This is the point in the review where I'm supposed to don my mortar board, pop in a monocle and explain to you what philosophical things this film is trying to tell us, the viewer. However, I don't have a clue what this film is about, or what it's trying to say. While some of its allegories are either immediately clear or become so as the film progresses - the snatching away of Budori Gusko's sister is actually alluding to her death, doubtless spurred by the death at a young age of Miyazawa's own sister, for example - others really aren't. This is particularly problematic when we reach the end of the film - something happens to resolve the core issue of the film, but there's no explanation of what that something is or what it entails, rendering the whole thing deeply unsatisfying. In turn, this is a spur to start examining other scenes and scenarios which crop up throughout the movie, and you begin to realise that virtually none of them seem to serve any obvious narrative purpose that to just be there and ensure that the main character has something to do. Even the areas of social commentary that are apparent seem overly modern to the point where we can only assume they weren't in the original novel penned in the 1930s!

This sense of confusion certainly isn't helped by the incredibly slow pacing of the film - every scene feels like it's being played at half speed, leaving scenes that should only a few seconds to stick around for ten, or moments that should perhaps take a minute of screen time taking five or more. When even the fade-outs at the end of scenes take an eternity, you start to wonder whether there was some kind of bet on to make the film's running time as long as possible.

To round off this whole turgid mess, Budori Gusuko himself is - to put it bluntly - an incredibly boring character. There's only one point where we ever see anything resembling a flicker of passion from him, and for the most part he just seems to wander around sounding bored and looking like a like a particularly dull robot that only follows instructions to do what he's told with no free thought of his own. For a boy who's lost his entire family, you'd be hard pressed to believe that he's suffered any trauma more significant than losing a Pokémon save game.

If there's one redeeming feature to The Life of Budori Gusuko, it's the films visuals - this movie looks utterly gorgeous. Aside from the fact that cats are adorable and make everything better (even when some of them sport beards in this film, which takes some getting used to), the animation, art style, use of colour and CG throughout the film are all sumptuous and a real treat for the eyes. Sadly, this isn't enough to justify it's long running time or the fact that its incomprehensible, but this is almost a film worth watching just so that you can soak up how good it looks, particularly on the big screen where you can really luxuriate in its sense of detail and expressive movement.

If an impressive visual aesthetic isn't enough for you however, then this is a movie that is best avoided - whereas Night on the Galactic Railroad is a fascinating and moving abstract tale of loss and happiness, The Life of Budori Gusuko is incoherent and largely incomprehensible, and further dragged down by its slow pace and long running time. Visuals aside, you'd be hard-pressed to reconcile that they're both made by the same director (although Gisaburou Sugii didn't write the screenplay for Night on the Galactic Railroad, which may explain a lot), and it's a real shame that anyone with a love for that prior work will most likely be hugely disappointed by this one.

Talking cats in anime have never looked as good as this - if only they'd been given something more interesting to say and do.

4
Visually this is a beautiful movie, but it's a massive shame that The Life of Budori Gusuko was such an inscrutable one.
LATEST REVIEWS