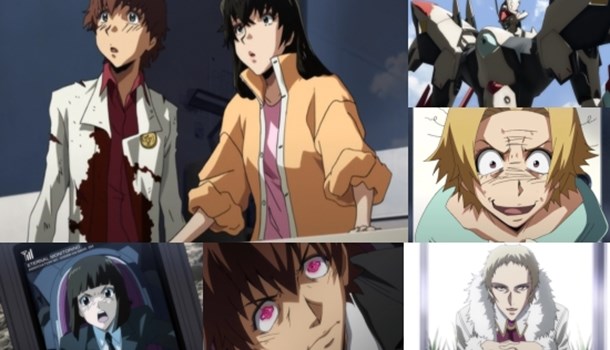 Kouichi Hayase is exactly the kind of milquetoast protagonist we've come to know and "love" in anime, especially those with a romantic bent - he's a weakling who seems to have spent most of his life being bullied and doing nothing to stand up against those who make his life miserable, leaving it to others to protect him while he merely dreams of being the hero who stands up against injustice.

Life is about to change for Kouichi however, and when we say "life" we mean "death", as a shopping errand sees a girl fall from the sky onto Kouichi. Not that unusual within the world of anime, admittedly, only this girl is inside a giant robot. A robot that crushes and kills him. Oops.

Luckily for our protagonist, this strange machine from another dimension also has the power to bring Hayase back to life, in doing so infusing him with the power to become a Factor who has the ability to summon and pilot this mecha. This is a real boon for Kouichi, bringing him both fearsome physical strength and an almighty robot which sees his previously wimpy persona replaced with one of fearless arrogance, as he enjoys switching the proverbial boot to the other foot and tormenting those who once bullied him.

This arrogance doesn't last for long however, as shocking events combine with being taught a lesson by another pilot to remind Hayase that being a Factor isn't all fun and games - this in turn takes us to the core of the series, that being Kouichi joining a group named JUDA who are trying to protect the planet and its status quo from a rival organisation known as the Katou Organisation who seek to disrupt it.

As Hayase becomes more comfortable within the confines of JUDA - or at least as comfortable as he can be surrounded by girls who all take a liking to him for some reason - so his role becomes all the more important in protecting the world as twists and turns bring the planet to the brink of obliteration, offering Kouichi the chance to be the hero of justice of which he has always dreamed.

If all of that sounds pretty exciting, then I probably haven't done a very good job of describing Linebarrels of Iron, because exciting is not really a suitable word for it. To the credit of the series it does provide a few juicy surprises and plot twists, some of which it then undermines as things progress, but beyond these mostly brief tonal shifts everything provided here is very much by the numbers. Thus, you have some reasonably well animated bouts of mecha action (provided you can forgive some already dated CG work), slices of blatant fan service and a topping of harem romantic comedy in a blend that will hardly set the world on fire.

Despite being just five years old, the series also manages to look oddly dated - not just from the aforementioned CG, but also from its 1990s-style character designs. It's a look which does make the show feel a little different to its contemporaries in fairness, but that freshness doesn't last for long once you become mired in the show's plot. Still, its presentation on this DVD release from MVM Entertainment is satisfying enough, and the show actually boasts a strong English dub for the most part which is at least an equal to the original Japanese production. Split across five DVDs, this collection also includes the show's two OVA episodes on a disc of their own alongside the twenty-four episodes of the series proper.

Taken as a whole, it's a struggle to find much to say about Linebarrels of Iron - its action can be satisfying in small bursts but is hardly original or imaginative, and likewise its comedy can be amusing at times for all of its silliness. The trouble is that there's nothing that succeeds in making the series stand out from the crowd, and at a busy time of year for big new releases this seems like just the kind of show that will be left forgotten and unloved. Unless you're absolutely desperate to get your hands on some new mecha anime in physical form this year, there's very little reason to provide Linebarrels with the love it wants you to lavish upon it.

5
It's reasonably proficient at everything that it does, but there's simply nothing memorable about this forgettable series.
LATEST REVIEWS