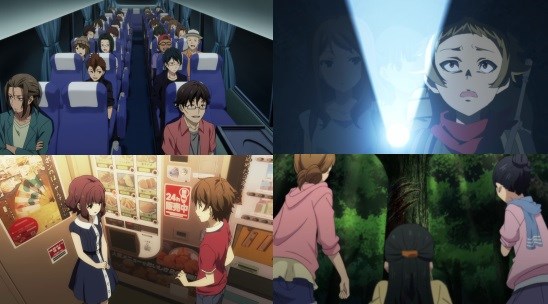 Adding all of these together should give you a pretty compelling show, so let’s see how many of these The Lost Village can tick off.

A coach is winding its way through the mountains with a full load of passengers headed to Nanakimura, a ‘lost’ village known only through rumour and not found on any map. They’ve been promised that they can start a new life in this village away from all the troubles they have in their old lives (there’s a bit of a suicide metaphor going on there in case you fail to miss the series hitting you over the head with it). Unfortunately a tense coach ride (which goes very poorly for the driver) only leads to a village which despite seeming to be everything they were promised, holds a lot of questions - particularly where all the inhabitants are given that things are clean and the gardens are tended. Not to mention the fact that one of the groups members seems to have vanished...

As set-ups go The Lost Village has everything handed to it on a silver platter. It’s intriguing, there are lots of people with mysterious pasts who might be involved with what’s going on and the location is fun - that’s everything it should need to be great. The thing is though that all of these great elements appear to have been put into place by throwing them into a blender and hoping that the result will coalesce into gripping drama. Sadly it doesn’t.

For starters there are so many characters that it’s impossible to either remember who they all are or have any attachment to any of them (and I thought that Shiki was bad in that regard).  Main protagonist Mitsumune is a bit of a twit if we’re honest. They try to play him off as innocently earnest but it doesn’t really play that way and the rest of the characters are all bizarrely over-exaggerated character tropes. Rather than making the story more entertaining and colourful this somehow makes things seem more dull and leaves you desperately awaiting the time when they start getting bloodily picked off.... except they don’t and the series is past the point where you would have expected this to have started if they were going that way. This leaves the plot bouncing around between the various characters looking into mysteries which are rarely presented in all that interesting a manner and the whole thing is presently just a few flashbacks away from becoming Lost set in the mountains rather than an island.

Studio Diomedea do a decent enough job on the technical side and the score is pretty good, but currently this is just not enough to make up for the lacklustre writing and direction, meaning that the whole show is left trying to convince its audience to just hold on because the twists are coming. Maybe they are, but it’s hard to imagine that many viewers will be left to find out. If you’re interested in the series at this stage I’d probably suggest you wait another few weeks till the series ends and let the social media buzz tell you if anything happened that would make the series worth sitting through because as it is you’d be better off going back and watching something like The Perfect Insider from a couple of seasons ago (or the live-action version of that same story which Crunchyroll have just picked up).

You can currently watch The Lost Village in streaming form on Crunchyroll.

5
If you try hard enough you could get lost looking for the point of this show.