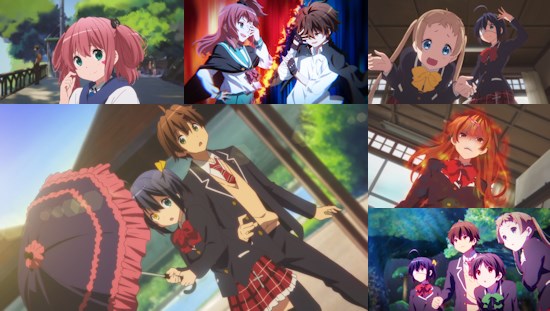 Come the end of the first season of Love, Chunibyo & Other Delusions, all was seemingly well in the world of Yuta and his new girlfriend Rikka - sure, she hadn't left her childish delusions behind entirely, but they had at least been reconciled against the truth of the experiences which led her down that path and accepted by Yuta himself.

As Heart Throb begins, it seems as if this burgeoning relationship should be progressing apace - Yuta's parents are working abroad and leaving the house in his charge, while circumstances have also contrived to strip Rikka of her own home, leaving her no choice but to move downstairs to live with Yuta. How scandalous! If this sounds like a recipe for unbridled teenage debauchery however, think again, for their relationship is going nowhere fast. Although Yuta seems pretty sanguine about this state of affairs and Rikka seemingly unaware of how strange this whole scenario is, those around her seem to be despairing at this lack of progress.

The fact that this love story seems to be moving at a glacial pace is only thrown into sharper relief by the appearance of Satone Shichimiya - a childhood friend of Yuta and "patient zero" (as Yuta puts it) from his chunibyo delusions of years gone by. It seems that Satone has unfinished romantic business with her "Hero", which threatens to throw a match into the emotional tinder box before her. Can this Magical Devil Girl take on and best the Wicked Lord Shingan in this battle for the heart of the Dark Flame Master?

Although this love triangle is the clear focus of Love, Chunibyo & Other Delusions' second season, at times you'd be hard-pressed to notice, as much of the series is more akin to episodic fare, allowing some of the show's wider cast time in the spotlight or simply goofing around with its delusional premise and the wider world around the main cast. All of these episodes are satisfying if far from sensational, offering up some easy laughs or eye-catching moments without ever proving to be as memorable as the first season's stand-out moments.

Unfortunately the same can also be said of the main thrust of its story - while a second viewing saw me change my tune on the quality of Love, Chunibyo & Other Delusions' narrative as it pertained to Rikka's delusions and their origin, I really can't say the same for Heart Throb. The lack of progress in the romance between Yuta and Rikka becomes increasingly exhausting, as does Rikka's unwillingness to relent in her behaviour, and to be honest Satone's introduction only makes the whole thing even more tiresome. While Shichimiya does get some of this series' stand-out moments as she struggles with her feelings in a far more compelling way than Rikka ever succeeds in, she never feels like a genuine rival for Yuta's affections and ends up feeling more like a convenient addition to serve the plot than a fleshed-out character in her own right.

As a result, your feelings on this second season will probably vary depending on what drew you to the first - if you're entertained by the cast's silly delusional shenanigans (and indeed the fantastic way they're represented visually), or by the show's slapstick comedy and line in witty comebacks, then all of this is very much present and correct here and is just as strong as it was the first time around. However, beyond that it's hard to escape the feeling that Heart Throb lacks... well, heart. This is a series that is following its template for success and just going through the motions without bringing anything new to the table, and personally I can't help but be disappointed by that, especially given how well the first series developed Rikka's character in particular. There's entertainment to be found here for certain, but less of the more subtle, introspective fare that elevated the series previously.

Still, as you might expect from a Kyoto Animation production the series looks splendid on Blu-ray - for the most part it isn't one of the studio's standout works, but its visual comedy remains strong and those brief but imaginative action scenes continue to be incredibly eye-catching even amongst its strong production values across the board. In terms of this UK release, subtitles are good save for the very first piece of on-screen text being left unstranslated (how did that slip through the net?!), and the English dub is decent enough even if Rikka's character in particular feels miscast and simply doesn't match her on-screen persona.

Given all of the work put in by its predecessor, Love, Chunibyo & Other Delusions! Heart Throb ultimately feels like a lot of anime that makes little real progress - in a sense, it almost feels like this series forgets why Rikka's character behaves the way she does (either wilfully or otherwise) just so that it can trot out more of the same for thirteen episodes beneath a barely noteworthy love triangle to give the series some fuel. For all of its fun comedy and smart visuals, this simply isn't a series to make your heart flutter, let alone throb.

6
It's more of the same for fans of the first series, but there isn't enough genuine emotion or progression here to make your heart throb.
LATEST REVIEWS