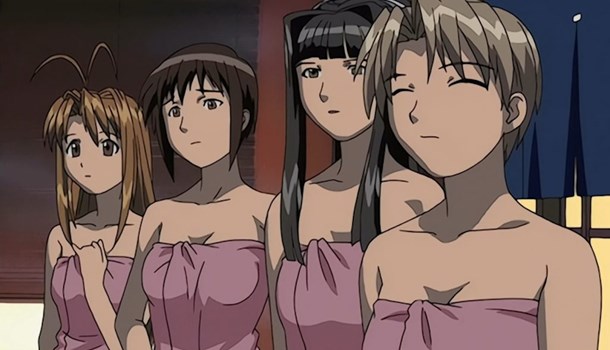 Here we are, finally. After volume 1 left me disappointed and volume 2 left me a little unsatisfied here it is - Love Hina volume 3! Definitely the best in the series thus far. Volume 3 seems to offer much more interesting gags and more characterisation of the whole group (rather than just Naru and Keitaro). Kicking off with a "mystery of the missing rent" led by the insane (presumably) American Kitsune and finishing with a giant turtle robot attack this is a bag of fun!

One thing I have however noticed is it seems to be becoming Tenchi Muyo - the situation and characters seem very Muyo-ish. This is no real downfall however, and some originality is saved by having Love Hina far more realistic but still...It does get to me sometimes. Anyways, the art in this volume is much like Volume 2 - good but not quite as luscious and lovely as Volume 1...It is however still miles above average.

Another thing which has gotten to me about this series is the lack of decent extras (no, a credits page for the DVD creators does not count MVM!!!!!!)...In volume 3 it is rectified a little with the inclusion of a short interview...Still nothing to write home about.

The stories contained within the episodes are getting better and better (and crazier and crazier) which is clearly to the series' advantage, seriously, its getting really good. Also, as of late (Volume 3 and the last episode of Volume 2) it has started referencing and taking the Mickey out of many shows, video games and, ultimately, itself in some occasions.

This is the series at its best yet - even if you weren't such a fan of Volumes 1 and 2 Volume 3 should please everyone suitably! Also, I might want to add, more interesting jokes have been included and the slightly annoying (and sometimes thinks-its-funnier-than-it-is) perverse bits have been few and far between - which is (surprisingly) an improvement!

9
Definitely the best yet and very recommended!
LATEST REVIEWS