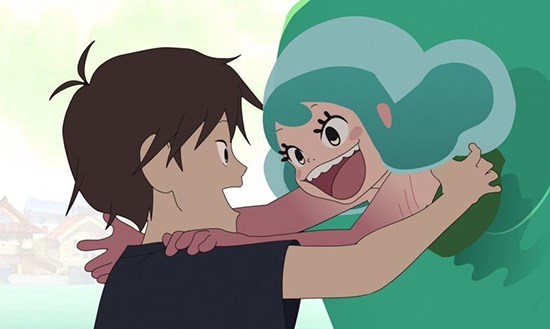 Lu Over the Wall (Home Release)

I caught Lu Over the Wall for the first time at the Leeds International Film Festival back in November 2017, where I watched it with subtitles and have now been able to watch the dubbed version too. The film follows the story of Kai, who lives in a small fishing town in rural Japan and who has a love for music. Kai is encouraged to join a band to make use of his talents and as well as making friends with the other band members his music also draws the attention of a friendly mermaid named Lu, who helps him out of a few tight spots!

Lu loves to sing and dance and just hearing her voice results in anyone else nearby uncontrollably tapping their feet! This also makes her a great asset to the band as she loves to perform, with an aim of making everyone her friends. Lu’s first performance with the band draws a huge amount of attention and makes her an internet sensation, despite the groups attempts to disguise her! This leads to the re-opening on the towns’ Merfolkland theme park and the band are invited to perform at the opening.

Sadly, not all of the townsfolk are pre-disposed to loving the merfolk, as tales have been told of how they turn humans into mer-people by biting them, as payback for a time when humans left a mermaid in the sun to die. So when Lu gets freaked out by flash photography at the concert and lashes out with her water-controlling abilities, many of the townsfolk turn on see her and she is imprisoned. It is then down to Kai and his friends to rescue her and protect her from the townsfolk.

SPOILER ALERT: All ends well with the merfolk helping to save people when the town starts to flood with many of the townsfolk being re-united with long lost friends and relatives that had become merfolk.

Lu Over the Wall was written and directed by Masaaki Yuasa (Night Is Short, Walk On Girl, Devilman Crybaby – a new Nexflix series) along with writing support from Reiko Yoshida (A Silent Voice, Tamako Love Story). It was produced by Masaaki Yuasa’s own production company – Science Saru – which he founded back in 2014.

This film is generally a fun and light-hearted, singing and dancing bonanza. However, the finale does take on a more serious tone with the over-arching message is that you shouldn’t judge others on hearsay, only on what you actually see them do. With its musical theme, the movie obviously has a great soundtrack, even if the wording in the dubbed version is a bit forced. The animation, although not as sharp and spectacular as a Gibli masterpiece in my opinion, it is to a very high standard. Not to mention that the mer-dogs are an incredibly cute addition.

The Blu-ray also contains an interview with Masaaki Yuasa and various international trailers.

Also for around £25 you can get the Blu-ray / DVD conbined collectors edition.

7
This movie can’t help but leave you with a warm feeling in your heart.