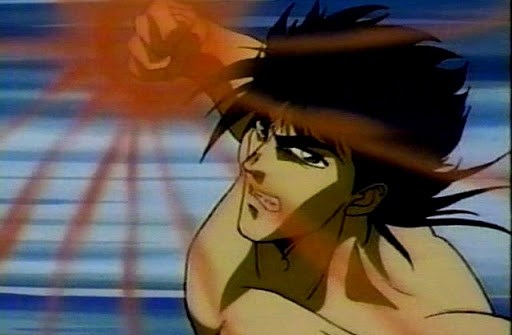 Note: This review was written around 2 years prior to being posted here so certain facts may be out of date etc. I was also 12 when I wrote this in case it seems particularly different to my other reviews. I have attempted to update any false facts, spelling mistakes etc but may have missed some.

Why do they do this to us? Us, the loyal anime fans who spend hours debating what really happened in Ghost In The Shell or fight over whether Dragon Ball Z was worth the ink. So why? Why, god why? Why must they drag this filth from the gutter of the worst anime and then release it? Because believe me this sucks in capitals. For a start, the plot sucks and the art is worse than Lupin III, which incidentally was done in the 60s/70s, around 20 years before this. Next we have the fact that most 'animation' in this is looped and just stills slid across the camera, the background buildings are looped less convincingly than the Flintstones. The dubbing is simply unacceptable. The characters are clearly talking and the mouths don't move at all in some bits. So, Is there anything good here? Anything? Err...err...err...Joe (the main character) seems cool at the start, oh, and there's this one amazing bit where you feel a great sigh of relief coming on, when the ending credits roll!

The story is kind of Blade Runner meets a huge pile of brown gooey stuff that comes out of your anus. I mean, really, by ripping off Blade Runner they have insulted that holy name, Black Magic, Ghost In The Shell andThe Matrix all in one go.

It all starts with this (probably around 35 years old) guy, Joe Takagami, being a compuer developer mourning over the girlfriend he left when he went to work on computers. Seriously, he thinks he sees her drive by him in a flashy car but he's too stupid to tell her. He sees her again after a couple days and, to stop her, drives in front of her without warning. Why the hell isn't there a crash? At least then the main character could crash and die so we wouldn't have to endure the rest of this nonsense. Well anyway, they go to a cafe and talk but he thinks she's his old girlfriend but she has a different name. So, he goes and finds out everything about her. She has the same hair, age and blood type as his old girlfriend so he realises something is weird. Long story short, he turns out to be some bad-ass killing machine clone thing. Blahblahblah and he does the usual 'I am a human *kills people*' 'let my little friend go because she can help me' and, we can't forget the tedious 'Whack! Whack! I kill you now!'

All in all, the plot just plain sucks with the good bits ending after the 'Manga Video' sign coming at the close. So, maybe if the buckets of ultra-violence is any good, the film could be rescued. Well, the violence is hardly animated with stills of punches being seen and the same short animation repeated. Maybe if the script is incredible it could be alright - well the script is competent but nothing great, not to mention it is made worse by some of the worst dubbing ever. EVER.

Graphically you're looking at a world of pain. These scrappy sketches make everything else look good. EVERYTHING.

Lets get to the conclusion so I can finish writing this review and you can finish reading this so we can both go away and forget all about this movie. In one sentance: Avoid this movie like the plague.

1
Banal, I hated it from start to finish.
LATEST REVIEWS