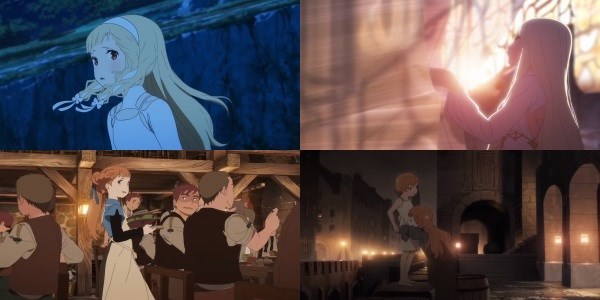 Maquia: When the Promised Flower Blooms is the directorial debut of Mari Okada, who is perhaps best known as a screenwriter for the likes of The Anthem of the Heart and Nagi no Asukara. The film begins by focusing on a clan of people known as the Iolph, who are akin to elves: in that they live incredibly long lives and barely show any signs of ageing. The story focuses on Maquia - a young girl of only fifteen years old - who fears being alone, as she has no immediate family. One day her peaceful life comes to an end, when an outside force invades her home in order to steal the clan’s secrets of immortality. Having been separated from her people, Maquia finds a newborn infant in the woods and decides to raise him as her son. Thus begin Maquia's struggles in understanding how to be a mother and surviving in a new world she knows nothing about.

The first thing to note about Maquia: When the Promised Flower Blooms is how gorgeous the art and animation are. The setting is a fantasy world filled with dragons, bustling cities and sweeping landscapes. There are a few large scale action scenes that manage to feel frantic, but at the same time rather intimate in the way they focus on certain characters during the battle. This really gives a feeling of immersion, making you care for the characters involved. Whilst these battle scenes are rather impressive, most of the attention of the film’s runtime is drawn from the everyday trials and tribulations of Maquia, as she adjusts to motherhood and living day to day. This is filled with scenes of her working in various jobs and raising Erial, her adopted son.

This aspect is the central crux of the film, as it focuses on a young girl completely re-learning how to live and adjusting to her new role. Despite having chosen this path for herself, she has no real understanding of how to traverse it. This gives the film a more emotional tone where we see Maquia question her new way of life and her struggle to adjust. From this we also see the hardships of single parenthood, as Maquia tries to care for her son while also needing to work to get by. Woven into this is the constant fear that looms at the back of Maquia's mind, because Erial is Human she will have to watch him grow old and die.

The film handles this facet in sometimes overbearing ways, as it hammers home the fact home that Maquia is not human and will outlive everyone she cares about. This is done through various scenes with death as a major factor, as well as via conversations Maquia has with her own kind in relation to humans and their coexistence. While a bit overwrought at times this aspect is necessary and the scenes are justified in context. We often see Maquia as a kind-hearted, cheerful, girl who is trying her best to get by. There are times when her emotions get the better of her, but she puts on a brave face and tries to act as she believes a mother should. This in turn leads to some comedic and heart-warming exchanges with her adopted son Erial.

The other aspect of this film that ties into the struggles of motherhood is the fact that Maquia will remain young looking forever, whilst Erial grows and matures. From this I was dreading and expecting their familial relationship to evolve into a romantic one, much like Usagi Drop did with it's manga. Thankfully this is not the case, their relationship remains wholesome throughout. With Erial becoming a well rounded character, thanks in-turn to how well he believes he was raised by Maquia. Aside from these main threads we also have a side plot involving characters from Maquia's clan, as they attempt to rescue Maquia's close friend Leilia. Who was captured by the empire's royal family, and is being used as nothing more than a tool to help create an immortal royal bloodline.

Thus we are introduced to the other main theme of the film, about living life in the present and not being bound by the past. We see this through several characters from Maquia's clan and how they have lived their lives since the attack. Maquia's clan preserve their history and writing by weaving cloth, which they call Hibiol. They see the Hibiol as a manifestation of the lives they have lived, as it tells their story. We see contrasts in the lives of the clan members, how they are unable to move on and how they react to the idea of letting go of the past. There are great metaphors and visuals which represent this, the main one being the cloth itself. The film uses it in various ways to show how important it is to Maquia and her clan, by protecting it even at the risk of their lives. We also see the Royal family in the film clinging to power by holding on to tired old traditions, instead of moving with the times.

All of this ties together well to create a really emotional film which shows the pain of loss that many of the characters feel, and their growth while finding a new ambition in life. This combined with the parental themes and having to say goodbye to the ones you love, creates a wonderfully emotional film, one which really highlights the joys and struggles of being a family. Maquia: When the Promised Flower Blooms is beautiful film with a lot of depth, charm and emotional weight, which delivers something rather wonderful.

Maquia: When The Promised Flower Blooms screened as part of the Glasgow Film Festival on 4th of March 2018.