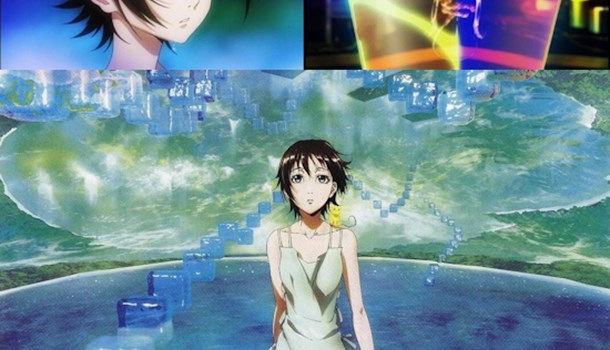 After dazzling us with its sleek science fiction setting, raising our eyebrows with its distinctly larger than life characters and thrilling us with a fantastic action set piece as its finale, Mardock Scramble's first movie, The First Compression, left us with a cliff-hanger than was not so much cruel as outright tortuous.  Thank goodness then that this year's Scotland Loves Anime chose to show both that first instalment and this second film, subtitled The Second Combustion, back to back.

Thus, no sooner had we been hung mercilessly from that cliff in the cinema were we reeled back in for this second movie to finish what the first had started, with Rune-Balot and her new investigative partner Oeufcoque in a decidedly tight spot.  Plucked from the midst of a battle they seemed to have no chance of winning thanks to the timely arrival of Doctor Easter, we're whisked away to Paradise - the rather ironic but not entirely inaccurate name for a secret former military base and the origin of many of the terrifying powers sported by characters within the series, Balot included.

Paradise proves to be the perfect location for both Balot and Oeufcoque to heal their wounds, while some of the facilities more impressive technology also proves to be a perfect location to investigation the full remit of Shell's plans, even if it does mean stepping into the realms of criminality to do so.  Of course, Shell's own investigator, Dimsdale-Boiled, is never more than a step behind, meaning that Balot and company are soon on the movie once again.

With Shell moving fast to accelerate his plans, the only option left for Balot and her pair of investigators is to go on the front foot, and thus the action for the latter part of this film moves to a casino run by Shell with the aim of surreptitiously stealing his stored memories to use as evidence in their case - a decision which involves Balot and Doctor Easter literally gambling on their own abilities in the process.

In comparison to the fast-moving and quick-flowing first film, the source material from the second Mardock Scramble novel means that The Second Compression requires a more sedate, slower pace by necessity - its action scenes are limited to some brief moments at the start of the film and some equally brief action in Paradise (where the film somehow literally manages to avoid jumping the shark!), with the rest of the movie taking on a more thoughtful tone.

Thankfully, this isn't necessarily a bad thing in itself - Paradise is as fascinating as it is gorgeously depicted in animated form while this series of movies continues to have no qualms about showing nudity and brutal violence as the source material requires of it to assert itself as very much a film for adults.

The biggest problem faced by The Second Compression is once Balot and friends enter the casino - this is undoubtedly an important, even pivotal, part of the story, but it's inherently difficult to make gambling seem exciting in animated form.  This is particularly true in the case of this movie, as it leaves the real climax of our heroine's gambling endeavours as a cliff-hanger to lead into the third film, meaning that what we see here is little more than the warm-up act which brings some additional characters into the picture while setting the tone for what's to come.  The production team have done their best to make these casino scenes seem "sexy" while pacing everything as quickly as possible, but you still can't escape the fact that there's only so much you can do with balls spinning on roulette tables and card games to hold a viewer enthralled.

Mardock Scramble: The Second Combustion may not dazzle like the first movie but it still has some great moments to offer, whether its brief slices of action or more thoughtful fair, all of which is complementing by its cast of fascinating characters and a perfect action heroine in Balot as she treads the line between a young girl fighting for her life and a powerful adversary for anybody.  In a sense, it's rather harsh to review this movie in isolation, as it clearly serves a purpose as the proverbial glue which links the first and third films together.  There's potential for this approach to have an epic pay-off in the third and final movie in this series - the only depressing thing about it is that we're going to have to wait a little while now to see just what the outcome of all this careful build-up will be.

Mardock Scramble: The Second Combustion was screened at the Scotland Loves Anime 2011 event in both Glasgow and Edinburgh - it will be officially released in the UK through Kaze UK via Manga Entertainment.  The film will also be screened across the UK in November as part of We Love Anime - more details here

7
A more sedate and thoughtful offering than the first movie, but there are still enough great scenes and characters to carry The Second Compression along solidly, while leaving us on tenterhooks for the final movie.
LATEST REVIEWS