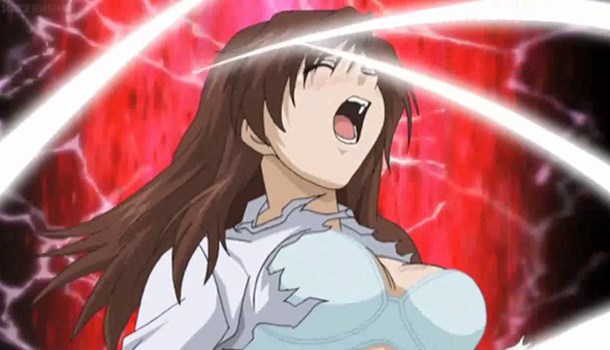 I have been saving this little gem for the end of a particularly rubbish week at work. Having been promised “buxom battling babes”, fan service, gratuitous full frontal nudity and panty shots, I knew I was in for a good evening lubricated with a couple of gin and tonics.

A few simple facts, before I tease you further with the talk of silky smooth skin, raspberry pink nipples, pristine white panties and clothes that explode with the slightest of touches.

All of these series do have a couple things in common, other than the same producers and directing staff.  Firstly, they all have a complete disregard for the laws of physics, gravity and momentum; and secondly, they are all beautifully pervy and badly written at times. Master of Martial Hearts is thankfully slightly different in that someone managed to get away with writing a half decent conspiracy plot involving missing priests, murderous buxom nurses and police ladies with vibrating killer truncheons.

The story, as limited as it may be at times, revolves around the efforts of Aya Iseshima as she literally gets beaten down to the bare skin as she attempts to free her friends who have been caught up in the tangled sadomasochistic girls-only fighting tournament known as Platonic Heart. This tournament, held for those women (D cup minimum requirement) who have a wish in their lives that they want, more than anything else, to be fulfilled is a fight to the death where the losers end up in the dark place of no return. In each episode, Aya meets with new foes who she must defeat to rise up the ranks of the tournament and come closer to finding her lost friends all while trying to solve the mystery and purpose of this secretive organisation, without losing her dignity in the process.

Just a word of warning though, the final episode is a bit... extreme, with a truly beautiful and needlessly complicated and convoluted plot twist in it.

Master of Martial Hearts is about one thing; titilation. Don’t let the story, the needlessly complicated excuse for a plot and the well animated fight scenes fool you. The focus, the raison d’etre, the reason for the existence of this anime, is to give little nerds, like myself, a half mast. Its existence is fulfilled on that basis.

This series uses the well established tricks of the ecchi trade as seen in a myriad of series that came before it, with some significant improvements:

The only word to describe Master of Martial Hearts is epic. It is bad in the best kind of way. It is re-watchable as there are details within the dialogue and scenes which you miss during the first viewing, but most of all it is just beautifully perverse and towards the end, actually quite emotional.

My recommendations are to watch this, on a big screen in the original Japanese dub with subtitles (as the English dub is absolutely dreadful) and complete with alcohol, friends and crossed legs.

7
It does exactly what it says on the tin.